In the midst of a lengthy and contentious election season, there has been an increase in conversation regarding refugees. Many of these conversations seem ignorant to humanitarian efforts and basic facts about the harsh conditions that many live. Most of these discussions have been fear-based. In an effort to placate fear-driven rhetoric, I decided to interview Suzann Mollner, the Executive Director of Beirut & Beyond, a nonprofit organization dedicated to relief, reconciliation, and relationship on behalf of Palestinian refugees.

In the years I've known Suzann, she has guest lectured in my courses on her work and the reality of the situation many Palestinian refugees face. Her experiences challenge the negative perspective many politicians and citizens seem to carry about refugees.

Why do you specifically serve Refugees in the areas where you do? What is the focus of your work?

I first walked into a Palestinian refugee camp in 2004 in Beirut, Lebanon, escorted into the camp by a local Lebanese NGO. Until that point I had no idea that Palestinians were refugees or that they lived in permanent camps across the Middle East. After that visit, though, I began to realize that they are actually one of the most vulnerable people groups in the world.

After 12 years of experience in Lebanon and Jordan (kids clubs, teaching English, war relief, food distribution, sponsorship programs, afterschool clubs) I am now intentionally focused on supporting local organizations and individuals who work inside the camps, assisting them as they impact their own communities. In the United States I teach on the Palestinian narrative and encourage my audiences to seek peaceful solutions to this complicated conflict. Beirut and Beyond is an organization dedicated to Relief, Reconciliation, and Relationship. Everything we do must be congruent with this mission.

Currently I am producing an independent feature length documentary film called This Is The Camp (see the trailer at the end of this article). We are focusing on the lives of three young Palestinian men living in three separate camps in three distinct countries. I have partnered with a filmmaker, Alex Meade, spending the past 4 months in the Middle East filming the trailer for the documentary. The film is a powerful way to honor the lives of actual Palestinian human beings, living out their hopes, struggles and dreams within the limits of their permanent refugee status. 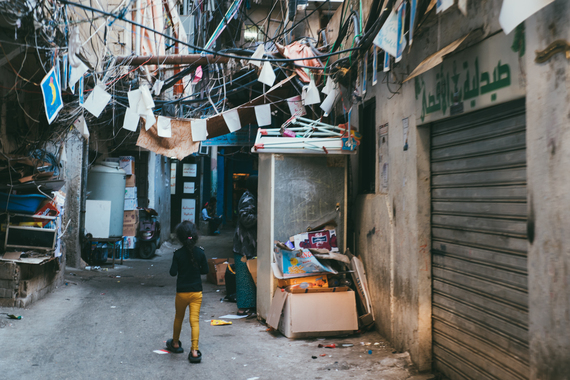 The perspective of refugees in the media and on social media in America politicizes refugees? To what degree of truth are these perceptions?

I work with Palestinian refugees; that seems to make a political statement in itself! There is little truth to the perceptions Americans have about Palestinians. Most don't even know Palestinians ARE refugees, much less that they are the oldest and largest refugee population in the world. I think it's easier to politicize the Palestinian situation than to wrestle with the enormity and complexity of the problem. Sadly this only perpetuates the Palestinians' plight.

What truths about working with refugees in the Middle East do you want people in America to know?

The primary group of refugees I work with are Palestinian Muslims. I also work with Palestinian Christians, but Muslims are the majority.

First, it's important to understand just how hospitable they are. In every camp I've visited, people welcome me into their homes and ply me with tea, coffee, and food. Palestinian moms are the best cooks! They always give their guests whatever they have on hand, despite their poverty. The hospitality and generosity of Arab Muslims is astonishing -- and deeply humbling.

Second, it's important to understand that due to their permanent refugee status, Palestinians are denied basic human rights such as citizenship, employment, education, health care, travel, and freedom. People in the camps are forced to depend upon the limited resources of UNRWA (United Nations Relief and Works Agency). This means that thousands of Palestinians remain uneducated, and their sicknesses untreated. In both Lebanon and Jordan, Palestinians are banned from legal employment in many vocations. Although some are issued travel permits, many cannot hold a passport or travel legally. If they do graduate with a high school diploma from an UNRWA program, university is out of reach for many. And for those who do have a degree, it may be illegal for them to work in their chosen profession in their host country. Because the majority of Palestinians lack citizenship, many dream of leaving for Europe or America to get an education, or to be able to work and live freely.

Third, it's important to understand the poverty of the camps. Most families must rely on UNRWA or private NGOs for basic everyday needs such as food, clothing, and toiletries. Many refugees in Lebanon, Syria, and Palestine suffer trauma in their everyday life; violence and conflict are a routine part of daily living.

Fourth, it's important to understand that although Palestinian refugees suffer tremendously, their suffering does not prevent them from experiencing joy. Palestinians suffer injustices daily, but there is something about this community -- a spirit that can't be broken. Weddings, engagements and celebrations overflow with vitality and resilience in the midst of poverty and decay.

Finally, I think it's important to know how humbled I am by the profound welcome I have experienced in the camps. As a Christian and an American I could not be more different than they. Nevertheless when I enter their homes I am given a seat of honor and treated with the utmost generosity and warmth.

I often wonder what kind of hospitality they would receive in my own country.

Check out the trailer for the documentary film, This is the Camp:

This Is The Camp - Trailer from 4N PICTURES on Vimeo.