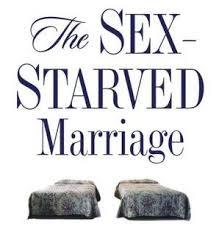 Do (or did) you and your spouse have significantly different levels of desire for sex? If so, you are not alone. Did you know that 1 in 3 couples has a sexual desire gap? But just because you aren't alone, it doesn't mean you should be complacent about a ho-hum sexual relationship. You shouldn't. It can lead to a miserably angry spouse, infidelity and divorce. If you don't believe me, watch this TEDx talk on The Sex-Starved Marriage

And although solutions to this sexual divide abound in magazines, self-help books and other pop psychology outlets, there is a little talked about fact underlying the problems associated with this sexual void.

The No's have veto power.

Here's the scoop. The spouse with lower sexual drive controls the frequency of sex -- if she or he doesn't want it, it generally doesn't happen. This is not due to maliciousness or a desire for power and control, it's just seems unimaginable to be sexual if one is not in the mood.

Furthermore, there is an unspoken and often unconscious expectation that the higher desire spouse must accept the no-sex verdict, not complain about it and remain monogamous. After decades of working with couples, I can attest that this is an unfair and unworkable arrangement.

This is not to say that infidelity is a viable solution to disparate sexual interests. It isn't. As with all relationship conflicts, being willing to find middle ground is the best way to insure love's longevity.

But what's a so-called "low desire spouse" to do?

Believe it or not, although sometimes the causes of low sexual desire are complex and deeply rooted, this is not always true. One of the most common causes for a sexual desire gap is also the simplest to solve. I recommend that the person with low desire adopt the Nike philosophy, and "Just Do It!" Why?

I wish I had a dollar for each time someone in my practice said, "I wasn't in the mood when I started making love but once we got into it, I really enjoyed myself. It felt great."

After seeing lots of this in my practice, I started to look around at the literature about sexual desire and discovered that for millions of people, sexual desire doesn't just happen, you have to make it happen. (Basson, R.) But what does this actually mean?

The human sexual response cycle is thought to have four stages:

Stage 1: Desire, which is defined as having a sexy thought or sexual fantasy that often occurs out of the blue or in response to a trigger such as seeing an attractive person, smelling a aromatic perfume, or watching a hot movie. Desire then prompts us to become sexually active.

Stage 2: Arousal is the excitement we feel, the physiological changes in our bodies once we're physically stimulated

Stage 4: Resolution, when our bodies return to the resting state.

But for almost half the population, stages one and two are actually reversed. They don't feel sexual desire until they've been physically aroused, until they've been touched. But once they've been stimulated, they feel plenty of desire. They're hot to trot. For these folks, arousal leads to desire, not the other way around.

If this sounds like you, it behooves you to do a little experimenting. Stop waiting for the fireworks to happen before you become sexual. Be receptive to your partner's advances even if you're not totally in the mood. Why? Two reasons.

You might just find that once you're into it, you're really into it. Plus, notice the changes in your spouse. She or he will be much nicer to be around. But don't take my word for it. Try it. At least watch this new TEDx Talk on The Sex-Starved Marriage.