Jan. 20th, 11:07am
With not even an hour of his presidency to spare, Barack Obama huddled in the holding room in the U.S. Capitol, just off the balcony, steps from where Donald Trump would take the oath of office. In this unusual setting, the outgoing President signed H.R. 39, the TALENT Act, to codify the Presidential Innovation Fellows program as a centerpiece of his legacy. The program, created by the Obama Administration in 2012 to build a more efficient, effective, and people-centered government, has received accolades across the political spectrum and private sector. The non-partisan non-profit that I run, the Institute for Education, has been an informal supporter of the Presidential Innovation Fellows program since its early days. I've been saying for years that the tech and innovation work of the Obama team was the most important work that nobody was talking about. And recently, the program has gained significant bipartisan support and even passed both the U.S. House of Representatives and the U.S. Senate with huge, almost unanimous bipartisan majorities.

Senator Mark Warner (D-VA) stated "as a former telecommunications executive, I know how difficult and bureaucratic it can be for government to adapt to new changes in technology, productivity, and data management. This program provides an opportunity for this country's top talent to bring their diverse and innovative experience to the federal workforce, without displacing change-makers within government." Republican Senator James Lankford (R-OK) embraced a similar outlook, "This law will play a part in helping improve the effectiveness and efficiency of our federal workforce. It was a pleasure to work with Senator Warner and Senator Booker on this, and I appreciate the efforts of House Majority Leader Kevin McCarthy, who authored the companion bill in the House."

But with the clock ticking on Obama's time as president and the District consumed with prepping for the inauguration of Donald Trump, getting the TALENT Act signed into law almost didn't happen. 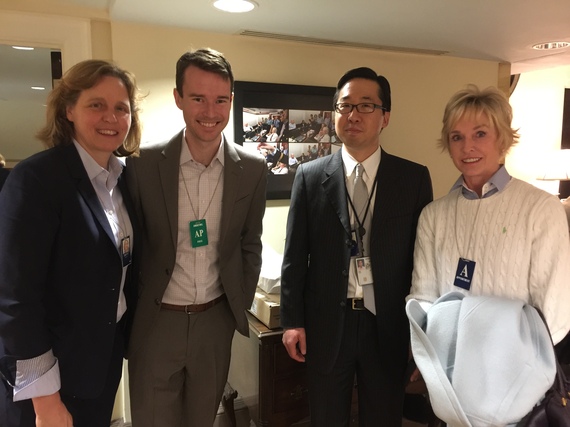 During the second half of 2016, a few former White House and Hill staffers ran a quiet lobbying campaign in the Senate on behalf of the TALENT Act. One of them was John Paul Farmer, who five years earlier had cofounded the Presidential Innovation Fellows program with former US Chief Technology Officer Todd Park. Farmer - a former pro baseball player turned tech power broker at Microsoft - still had a personal interest in making sure the Presidential Innovation Fellows program stuck around into the new administration, so he devoted his spare time to it.

After dying at the last-minute during the 114th Congress, the TALENT Act rose from the ashes at the beginning of the current 115th Congress when Representative Kevin McCarthy (R-CA) re-introduced the bill to the House. Majority Leader McCarthy and his whip-smart tech guru, Matt Lira, kept a close eye on the bill's progress, until it ultimately passed by an overwhelming majority: 386-17. On Tuesday evening, the Senate passed an identical companion bill by unanimous consent. Everything appeared as though it would head on to a fairly typical signing process.

House Speaker Paul Ryan (R-WI) was the first to sign, but then, the physical bill got hung up in the House and didn't arrive in the Senate until mid-afternoon Thursday, January 19th. By the time Senate President Pro Tempore Orrin Hatch (R-UT) signed the bill and returned it to the House Clerk for delivery to the President, it was already early evening on inauguration eve and Ryan's staff was gone for the day, either to get ready for inauguration parties or just to ensure that they could get home ahead of any protests or street closures. White House teams had turned in their badges and White House emails shut down. Communication was not fluid. Our government was handing off to the next administration, a peaceful transition of democracy. So the bill sat in the House Clerk's office and simply never got sent to the White House.

At a normal time, the White House Office of Legislative Affairs would've probably been pressuring the House to deliver the bill that they were expecting, but with the Trump inauguration the coming the next day, almost all of the staff had already been off-boarded and turned in their badges.

With no word from the House, John Paul Farmer sprang into action. Despite being repeatedly told it wasn't going to happen, he refused to take "no" for an answer, working the phones past 1:00am and starting again before dawn on Inauguration Day. Starting with the House Clerk, Farmer figured out what needed to happen to move the bill. After tracking down contact info for Ryan's staff in the Speaker's office, he still needed to figure out which West Wing staffers were still on the job. He then brought them all together and - because it was already mid-morning on Inauguration Day and there was no time for delivery to the White House - Farmer hatched a brilliant plan to have President Obama sign the TALENT Act into law during the few minutes between entering the Capitol Building and making his public appearance on the balcony outside, where the oath of office would take place. Seats were filling up with 4 past presidents, 8 Supreme Court Justices, Senate and House leadership. Getting Obama to that holding room was the only option left...and, BINGO it worked! The 44th President of the United States, Barack Obama, signed his last official act in office, The TALENT Act!

They say not all heroes wear capes. In my mind, the Presidential Innovation Fellows have been proof of that for years. But we should also thank John Paul Farmer, because without his resourceful, heroic efforts the terrific, bipartisan TALENT Act would have been a relic of the Obama presidency and not cemented its lasting legacy - using tech and innovation to make government work for the citizens.