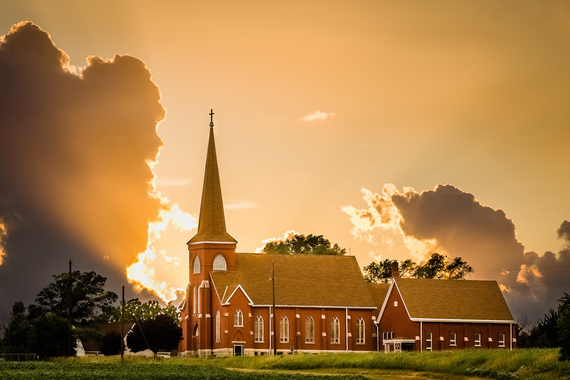 Those (of us) who do sightings of religion in public life are schooled to notice not only the "what" of religious phenomena and happenings, but also the "where" of each.

A guiding theme in my observing and reporting derives from a provocative and (only slightly) over-stated claim of José Ortega y Gasset: "Tell me your landscape and I will tell you who you are." It takes more than our "place" to explain our whole selves, but location tells much.

Two items this week popped up on my screen as reminders.

First was a Christian Headlines story by Veronica Neffinger announcing the "Top Ten Most Bible-Minded Cities in the Country." The Barna Group, reporting through the American Bible Society, listed ten cities which were most "Bible-minded." Never mind right now what "-minded" here means.

We have a hunch, and expect no one to be surprised, that all are Southern cities, three of them in Tennessee. Publics who bring "the hermeneutics of suspicion" to such a story may also note that most of these cities are in states with the highest divorce and "illegitimacy" rates, a fact which suggests that "Bible-minded" can mean many different things, but . . .

Second was a Pacific Standard story on "The Death of the Midwestern Church" by Lyz Lenz, who writes of "decline," a favorite paradigm these years, or "loss" or "crumbling," which are not quite the same as "death." Still, take Lenz seriously, as she reports aptly on the reasons, which evoke her metaphors.

"This loss is due, in part, to the continuing move from rural to urban life," Lenz reports, and, quoting sociologist Paul Lasley, "the increased mechanization and corporatization of farms, neighbors becom[ing] more far flung," etc. Her stories illustrate the effects of these as they bear on religion.

As each of us reads stories about places, we quite naturally compare them to accounts of our own place and personal experience. Having spent all but one of my years in the Midwest, the exception having been an internship in Washington, D.C., I feel at home with the depiction of landscape and churchscape in the Midwest and on the Great Plains.

The epics deriving from there, as in the poetry of John G. Neihardt and the novels of Willa Cather and Wright Morris, provide some matrix for my judgments. And the love for such places evokes mourning in the face of stories of decline. It also evokes disappointment when one finds humans "spiritually" misusing the landscape and doing so many bad things that other people in other places are simultaneously doing.

I grew up in a Nebraska and Iowa when family farms dominated. In a typical high school class one expected all but a few college-bound adventurers to marry young, have several children, and focus on local institutions like school and, of course, church. Today the young head to universities and corporations and cities, with fewer and later marriages, and ever less investment in the old home place about which it gets harder to be nostalgic.

The "death" metaphor of Lenz's story does not do justice to the thousands of examples of imagination, adaptation, enterprise, and religious energies that survive and often prosper on less than promising soil or in ever-declining towns. One does not have to be a romantic to recognize how much of the life, including the spiritual of young and old, prospers against all odds in such places.

Recruit young church people to do what "my" denomination sloganizes as "God's Work--Our Hands" and you will find good prospecting in many places where change and hardship, but not death, reign.