How Losing My Mom Prepared Me for My Brother's Suicide

What could be good about my mom dying when I was a kid? Not much, I thought -- until I lost my brother last year.

My mom has been gone for 25 years. She lived with a lump in her breast for a year before seeing a doctor, afraid of what it might be. Diagnosed with an aggressive form of breast cancer, she died a year and a half later.

Her death shredded my teenage world and forced me to reconfigure my life. For years I considered it a bad, sad thing. I didn't have my biggest champion riding alongside me, showing me the womanly ropes in life. The sting was especially bitter at pinnacles like college graduation, my wedding day, and the birth of my first child.

Last year my brother, Jim, died by suicide. In May he called to say he was depressed about mid-life marital troubles. By June he was battling suicidal thoughts. We spent the summer on the phone, talking, texting and emailing. Him sharing his shattered heart, me trying to put it back together.

Divorce was a four-letter word for Jim. A builder by trade, he was inclined to fix everything. When his most prized relationship turned up broken, he set about mending it, too. Somehow the depression weakened him until he believed he was broken beyond repair. In early September he ended his life.

Jim's tragedy seemed insulting to my already-injured family. Jim died on Sept. 5; my mom died on Sept. 7. She was 46 and I was 15. Jim was 47 and his oldest child was 15. History, cruel beast, had repeated herself in a mocking chorus of eerie parallels.

At first I didn't see how one tragedy would help me handle the other.

When someone dies young from natural causes, as my mom did, it's difficult enough to understand. Long lingers the question: Why? I still believe my life, and the lives of my husband, children and extended family, would've been better if my mom had defeated cancer and lived to old age.

Suicide is a different story. On top of confusion and disbelief, it piles thick layers of guilt and feeds an endless river of "if only" regrets. If only he'd asked for help sooner. If only I'd offered a different bit of sage advice -- that would've saved him. If only I lived closer to him, then I could've camped out on his lawn to make sure he wasn't hatching a suicide plan.

Not to mention the stigma. Society tends to reject those who take their lives, casting them as cowards or crazy. 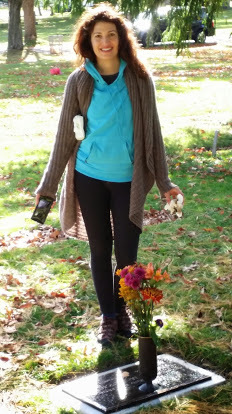 Death sucks, no matter how it happens. But there's an upside. It helps to think of it like a broken bone. Once we experience it in a certain part of our bodies, when it happens elsewhere, there's familiarity. We know pain and discomfort are part of the process. We'll need to treat ourselves gently and get proper treatment. Eventually we heal, but our bodies won't be quite the way they were.

My mom's death was the first major fracture in my life. My brother's was the second. A year after he died, I'm beginning to see how the first loss gave me coping skills for the second.

The stages of grief (denial/shock, bargaining, depression, anger and acceptance) don't necessarily happen in a linear fashion. They aren't a checklist. But confronting each stage is important. If we avoid any of them, later on they'll rear uglier heads.

Grief comes in tidal waves. It surfaces on days when we're not expecting it, amid different conversations and settings. On my brother's 48th birthday I was vacationing with my husband's family, and I figured I'd end up crying. I was wrong. It didn't hit me until a few days later, during a family prayer time. I cried for at least an hour.

We do "move on" after significant loss, but we don't leave it behind, as our culture might have us believe. It becomes part of who we are. Life doesn't get easier, and it won't revert to the way it was. Sometimes it's more difficult. Ideally, we emerge resilient, perhaps even closer to the people we're meant to become.

A person's life can pack a lasting punch, even if he or she dies young. My mom has been away for most of my life. But fundamental aspects of my character are rooted in her life and love for me.

My brother is gone but a year. Still, we had almost 40 years together, and his influence was stronger than my mom's. Extended time with him afforded me a clearer understanding of who he was. I was and will continue to be greatly changed by his life and death.

For some questions, the answers won't come. I don't know why my mom and my brother both died in their prime. And while explanations are missing, I continue to seek meaning in the pain and suffering that follow tragic loss.

Finding meaning takes time. I suspect that in another 25 years, I'll think differently about sorrow. Right now I'm thankful for the subtle-yet-undeniable evidence that sorrow has a purpose. In the last few weeks friends have connected me with others confronting suicide or suicide attempts. If I can offer even a whit of solace, then I'll be using my sorrow for good.

Author and radio personality Chris Fabry recently discussed the abundant life on his show. He suggested that abundance isn't merely when all seems right in our worlds. We can live abundantly as we deal with heartbreak, tragedy and confusion. Even when loved ones leave too soon, we can eke out a full life.

That's my desire. To draw good from bad, meaning from suffering. Death sucks. But it doesn't have the power to suck the joy out of life.