My Center on Budget and Policy Priorities colleague Chuck Marr presents me with two very different perspectives on the current economy.

In short, families are shopping more at dollar stores. But they are buying only what they need. They are picking up low-margin goods, cheaper per unit at dollar stores than places like Wal-Mart, and sold in smaller packages to let customers spread purchases out.

But at the other end of the economy, there's this:

Even with the economy in a funk and many Americans pulling back on spending, the rich are again buying designer clothing, luxury cars and about anything that catches their fancy. Luxury goods stores, which fared much worse than other retailers in the recession, are more than recovering -- they are zooming.

Wait a second, you're saying. I thought all the data were terrible. How could anyone be getting ahead right now?

In fact, corporate profits aren't just back to their pre-recession peak: they've surpassed it. The figure shows profits/GDP over the last decade (through 2011q1-most recent data point). You can see that profits took a hit in the great Recession as did everyone else. But you can also see their sharp recovery, a trend which stands in stark contrast to jobs and incomes of most everybody else.

(Chuck, our tax guy here at CBPP, looks at these data and concludes that the expiration of the highend Bush tax cuts remains a very good idea.) 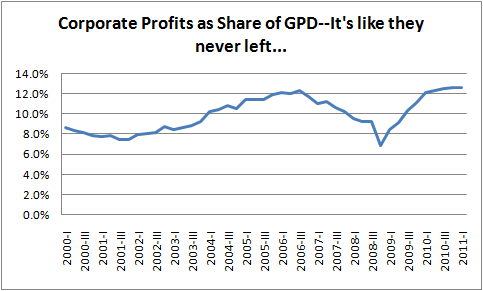 How is this picture consistent with an economy and job market hovering at stall speed? A lot of these firms are able to sell into (and create jobs in) foreign, emerging markets, where growth has been reliably solid in recent years. Other have found ways to squeeze productivity gains out of their incumbent workforce, able to meet current levels of weak demand without adding workers.

Something's gotta give, folks. It's an economy that's terribly weak in the middle, and that's where most of us live.