Fran Siegel's large, vibrant, blue-tone drawing 'Overland 19' poetically captures the character of Pasadena and the San Gabriel Valley. Created on Mylar, it clearly and honestly communicates the vibrant quality of this area with a unique combination of multi-media, cutouts and elements expanding beyond the frame.

The expressionistic presentation of the city and the surrounding San Gabriel Mountains is composed of rough strokes combined with subtle details and stark contrast between light and dark. It conforms to the wide-screen shaped format while, at the same time, breaking its boundaries.

Up close, one can differentiate between the drawing and the colored shadow that is projected by the paint onto the white wall. The ethereal impermanent nature of the wrinkling vellum effectively relays the changing nature of the metropolis by moving ever so slightly as the spectator passes by.

Pasadena, incorporated in 1886, was at that time known as a favorite winter tourist destination for wealthy families from the East Coast and also for its prolific orange groves. Several of these families, the Wrigley's and the Gambles, built large residences on Orange Grove Boulevard, known then as "Millionaire's Drive." With a population of only 140,000 people, Today, Pasadena is perhaps best known as the location of the California Institute of Technology (Caltech,) Jet Propulsion Laboratories (JPL,) Art Center College of Design. (ACCD) and as home to The Rose Parade, the second largest parade in the United States and held each year on the 1st of January. Pasadena is also a transportation hub with several major freeways and the Metro Gold Line within its boundaries. 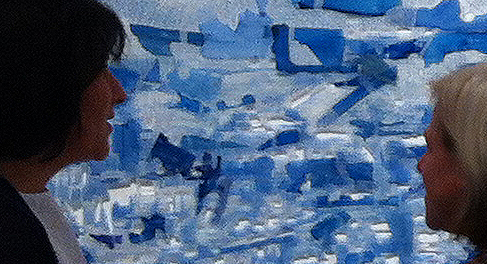 For a Los Angelino, like myself, the drawing above is instantly recognizable. Covering the surrounding mountains and valleys, with its mixture of skyscrapers, commercial and residential homes, it depicts rivers channeled in concrete, carving a trough through nature and creates geometric patterns with its crisscrossing freeways and surface streets.

With all its 'best in the world' technology and art, Fran has also skillfully captured the ever-growing development of the beautiful San Gabriel Valley. As a unique blend of old and new, it is a showcase for the historic and romantic Old Town Pasadena area, where over twenty-seven hundred entrepreneurs populate its historic brick buildings. Little wonder it continues to be a favorite destination for 'in the know' creatives, as well as for savvy tourists from all over the world. 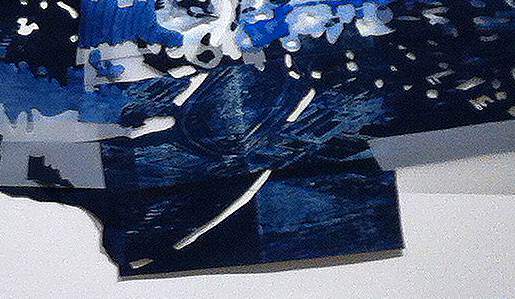 Fran Siegel is a graduate of Yale University School of Art: Painting. She lives and works in San Pedro, a port of Los Angeles that is predominately a working class neighborhood with a growing artist community. She exhibited the art piece described here at Alyce de Roulet Williamson Gallery at Art Center College of Design and has exhibited at Lesley Heller Workspace, the Art, Design, and Architecture Museum at UCSB and Genovese Gallery in Boston. She has participated in a range of art projects, such as: The Margaret Thatcher Project, "Transient Borders," "Observations of Light and Matter," "Trace" and "Interference."