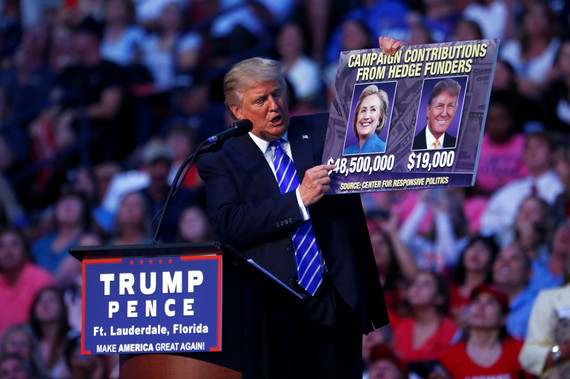 When my students ask about the implications for Africa under the direction of Donald J. Trump or Hillary Rodham Clinton, I have two reactions.

The first, and easy one, is that with the November 8 vote still months away, there will be plenty of opportunities to weigh the candidates' arguments and interactions.

The more immediate question is what their campaigns tell us about the strengths and weaknesses of the US democratic experiment that might hold lessons for democracy in Africa.

Trump's strongest supporters are Americans who prefer strong men over strong institutions. Trump is tribal. He is no democrat. He promises authoritarian leadership to an angry majority of Republican Party members. They fear a loss of status; they resent globalisation and immigration. They're scared of terrorists and want a more assertive America dominated by white Christian males. "Make America great again!"

Trump's demagogic genius has been to circumvent the Republican elite and appeal directly to the party's alienated majority. He has gained support from both only on the basis of their shared hatred of Clinton.

Clinton won the Democratic nomination on a completely different ticket. It included a celebration of American diversity and concessions to a progressive faction demanding greater economic justice.

Africans have bitter experiences with demagoguery, authoritarianism and foreign exploitation. After all they live on the world's most ethnically diverse and fractious continent.

Achieving greater freedom and equality for all identity groups has long been African democrats' primary goal. By contrast, American democrats have traditionally been preoccupied with individual rights.

Today on both continents democrats are testing variations of these ideals. These are experiences they might usefully share.

Democracy is best defined as a political experiment whose sole aim is to keep the experiment running. And a constitution limits and shares power among all parties to the agreement.

America's 1789 constitutional bargain excluded many. Most notably it excluded women and most egregiously African slaves in what today would be deemed a crime against humanity. How America's two major parties have dealt with excluded identity groups' demands has defined their priorities since the 19th century.

In the 1960s the Democratic Party lost a large faction when it passed civil rights legislation. Virtually all the white segregationists who controlled the bloc of southern states quickly turned Republican (and remain so). The effect was to further hinder the centuries-long struggle by African Americans for full and equal voting rights.

In this election Democrats are more determined than ever to advance equal rights for all groups, however self-identified, within constitutionally acceptable limits.

America's Democratic Party is now perhaps the world's most diverse political party. And like most other voters the world over, Democrats cast ballots primarily according to their self-ascribed identities. They do so with an agreed party platform of supportive policies.

There were striking visual differences between the two US national conventions. Republican delegates were nearly all white. By contrast the Democrats could be mistaken for a meeting of the United Nations, although with more women and fewer suits.

This same loose coalition of Hispanic, Asian, and African-Americans, plus the young and the well-educated, gave Obama his two terms in the White House. Demographically they are America's emerging majority. Lately they started acquiring proportional representation appropriate for equal standing in America's evolving version of democracy.

Lasting political reform will be possible only if a more pluralistic majority gains greater control over America's national institutions. For 227 years the Constitution has ensured disproportionate power for small states. This has helped perpetuate the domination of descendents of a founding group of Europeans.

The African Union is very different from the US. But it has adopted a long-term vision, Agenda 2063, that envisions pan-African integration by democratic means.

More immediately and substantially, the African Union's Constitutive Act of 2002 enshrines a consensus that supports democratic development in all 54 African states. The African Charter for Democracy, Elections and Governance commits all member states to hold periodic credible elections and invite AU observation.

States will no doubt invoke traditional rights of sovereign equality to impede Pan-African integration. This is analogous to the persistent claims of America's 50 states against encroachment of federal authority.

Africa's approach to democracy differs from America's in another important way. It focuses more on ensuring "horizontal equality" among diverse cultural and ethnic groups, rather than among individual, or "vertical" rights.

Highlighting this distinction helps clarify the historic nature of America's 2016 presidential election. Democrats are seeking greater horizontal equality. For Republicans the focus is on the unfettered rights of individuals. Take the issue of gun ownership.

Lately African commitments to democratic governance, nationally and regionally, appear to be faltering. Leadership provided by South Africa in founding the AU and advancing an African Renaissance is missing. No new champions have emerged.

Authoritarianism is reviving under leaders more like Vladimir Putin than Barack Obama or Hillary Clinton.

Africa's democrats therefore have a special stake in the outcome of the US election.

A win for the Democrats on November 8 would affirm the maturing of American democracy in several ways that are relevant to Africa's democratic development.

The most obvious gain would be greater gender equality, with the election of America's first woman president.

A Republican defeat would also mark another "post-colonial" turn for America. A turn away from the historic domination of one identity group and towards democratic pluralism based on greater equality among several identity groups.

African Americans will be prominent among these identity groups. They are likely to be even more influential under Clinton. They are playing a role as crucial to Clinton's nomination as angry whites are to Trump's. Recent polling shows Trump's support from black Americans to be less than 1%.

With Clinton's victory increasingly likely, the AU should consider new ways to strengthen ties with leading African-Americans. They are, after all, the the richest and most influential segment of Africa's global diaspora, the so-called sixth region of the African Union.

Should Trump win the election the main lesson for Africa's democrats would be that no democracy, however old and institutionally strong, is ever secure.