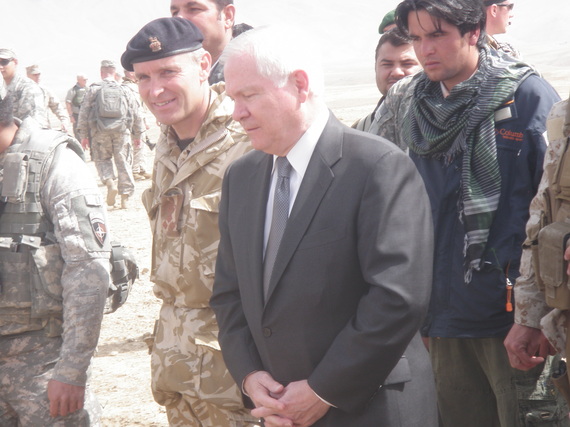 On April 28, 2008 I found myself in the worst firefight of my life, surrounded by the Taliban, out-gunned, out-numbered, preparing to die. The explosion from a mortar round that landed 3 meters away from me sent me flying into a ditch. When I came to consciousness, I thought, "Ok, this is it... that last one was too close... they have me targeted... the next one will surely kill me."

As if out of a movie script, when all hope seemed lost, a rescue convoy arrived and helped us fight off the Taliban fighters. As the reinforcements counter-attacked, I felt someone fall into the ditch next to me. Suddenly, an AK-47 fired in rapid succession next to my head. My body tensed. American soldiers don't use AK-47s -- but Afghans, esp. the Taliban, do. I turned and much to my relief found an Afghan man dressed in the uniform of an Afghan National Army soldier.

"Who in the hell are you?" I screamed over the intense gunfire and explosions.

"I'm Janis, I'm one of your interpreters!" the man yelled back.

And that's when I noticed what he had been shooting at -- the bodies of two dead Taliban fighters. Janis had seen I was alone in the ditch and that these fighters were sneaking up on me. Determined to protect me as his guest, Janis killed the fighters before they had the chance to kill or capture me. Simply put, I owe Janis my life.

For the next five years, I endeavored to fulfill a solemn promise -- I would get Janis and his family to America, where the Taliban could never threaten them again. During those five years, I learned just how little the U.S. State Department actually cares about these brave men and women who have served our nation at war. At one point, the State Department even revoked Janis' visa because they received an anonymous and bogus Taliban tip claiming Janis was really working for them, ignoring his seven years of heroic service and two years of investigations into his background by the US intelligence community.

Thankfully, Janis and I prevailed and he and his family immigrated to the United States in late October, 2013. The outpouring of support from complete strangers took both of us completely by surprise. Within a week of his arrival, we raised over $35,000 and fully furnished his modest apartment.

But the real shock, came in mid-November when we went out to dinner with his family. As we ate, a man at the table next to us came over and introduced himself. Before we could return his introduction, he cut us off and said "I know who you are, you're Matt Zeller and Janis Shinwari, you're the people who save the interpreters." It turned out, the man had been an Afghan interpreter to U.S. forces and had followed our story with great interest. After a brief and pleasant conversation, he turned to rejoin his family's meal. But as he walked away, he hesitated, turned back and said, "By the way, is their any chance you could help my cousin? He is an interpreter in Afghanistan and is still waiting for his visa." The man at dinner was only the tip of the iceberg. As the media picked up on our story, Janis and I have both lost count at the number of emails and Facebook messages pleading for help.

Our encounter with the man was only the first of several catalysts for our call to action. Two weeks ago as Janis received a call from a number he didn't recognize. He answered and I heard the rapid near yelling pleas of a man saying something in Dari. Janis' eyes grew wide and his smile transformed into a scowl. I've seen that look on his face once -- when he saved my life. Janis turned to me and said, "Matt, on the phone is my friend and fellow translator Ajmal. He is in San Francisco, homeless, and has no way of getting to Washington, D.C. The State Department gave him and his family 48 hours to leave Afghanistan. Can we help them?" Within 20 minutes, I booked Ajmal and his family a flight to D.C. and Janis arranged for them to stay in his apartment until they could find a place of their own.

Ajmal is just as much of a hero as Janis, having faithfully served our military at war for many years. He was even Secretary of Defense Robert Gates' personal interpreter while Gates visited our forces in Afghanistan (as seen in the picture above). Thus, you can imagine his shock that it took nearly three years for him to get his visa and his anger at the fact that the State Department only gave him a visa that was good for 48 hours.

To understand why the 48 hours is so insulting and a totally unacceptable precedent, one must first know how the process "normally" works. Usually an interpreters immigration visa is valid for roughly three months -- a fact that reflects the time it takes for the State Department to properly arrange for the interpreter's resettlement and flights out of Afghanistan. For example, in order for an interpreter to get refugee resettlement benefits from the U.S. government (i.e. a modest sum of money meant to pay for first month's rent on an unfurnished apartment), he must apply for said benefits through the State Department and agree to have his flights from Afghanistan arranged via an organization called The International Organization for Migration (IOM). IOM only arranges flights after the State Department has secured a refugee resettlement agency in the US to take care of the interpreter upon their arrival in America. The last thing anyone wants is an interpreter wandering the streets of the U.S. homeless and broke -- at least that's what they claim.

The process of securing a refugee resettlement agency and IOM booked flights takes on average 3-6 weeks according to the State Department's own correspondence (I've seen first hand what they tell interpreters as Janis shared with me all of his correspondence with the State Department). Thus, the tremendous insult to Ajmal. By only giving him 48 hours to leave the country, State effectively told him he would never get the resettlement benefits he's clearly earned and dared him to leave at his own expense.

Ajmal immediately realized his predicament and returned to the counter at the embassy in Kabul where he received his visa. He showed the document to the local Afghan working the counter and asked if someone had made a mistake? How was he supposed to travel with only 48 hours to spare? The man was just as shocked as Ajmal. He took the visa and went to a back room where the Americans sit and returned several minutes later. Leaning forward he whispered to Ajmal, "leave immediately. Get out while you can. This is your only chance to save yourself. If you don't leave before that visa expires, you will have to repeat the whole application process. The Americans are leaving in a year. They will never finish your visa in time. Get out now while you can."

Over the next 48 hours, Ajmal spent his life savings and borrowed thousands of dollars from friends and family as he desperately tried to reach America before the clock on his freedom expired. Along the way, Ajmal said, Emirates Airlines stole $7,600 from him. They booked his ticket, took his money, and then their man in Kabul refused to let him and his family on the plane. Thankfully, Ajmal found another last-minute flight to Dubai via another airline. From Dubai, Ajmal said, Emirates Airlines made them pay another $1600 to rejoin the flight to San Francisco that they had originally booked. He and his family landed in the United States on December 31, 2013 with only hours to spare before their visas expired. Days later, having wandered the streets of San Francisco homeless, he happened to find another Afghan who took him in and from there found his way to Janis and me.

Janis never fails to amaze me with his kindness and generosity. Calm, patient, the embodiment of laid-back, nothing seems to phase him -- except seeing his fellow interpreters abused and suffering. After our experience with Ajmal, Janis asked me to use the money we've raised to help his family start a new life for a far larger purpose -- to help resettle Afghan and Iraqi interpreters. Fed up with the State Department's total failure to take care of our friends and allies, Janis refuses to sit quietly and enjoy his much-earned life in America.

For the past several weeks, we've worked to set up No One Left Behind, a non-profit dedicated to helping Afghan and Iraqi translators gain their U.S. Special Immigration Visas and ensuring that they are properly resettled in America. We define properly resettled as arriving with a furnished apartment and some modest financial support to help cover the weeks it can take before their social service benefits (food, medical, etc.) begin. To accomplish our goals, we've set up a fund to support interpreters like Ajmal.

As I watch Janis' and Ajmal's children play with each other I'm overjoyed to know that together Janis and I have saved another Afghan family. But then I think about how they got here and I'm enraged. I was a guest in their country and they took incredible care of me -- Janis even saved my life. And this is how we repay them -- with continuous bureaucratic ineptitude. You'd think after what State did to Janis they would have learned their lesson. But apparently not. Apparently their next chapter is a cruel joke in which interpreters, who have clearly earned their American salvation, are only given mere hours to flee their Afghan hell. This isn't how we should treat those who served our military at war. We ought to take our example from our Afghan allies as they clearly know how to take care of their friends.