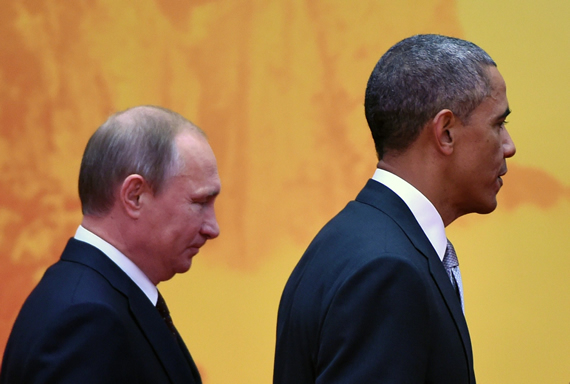 Much has been said about Russia's intensified military involvement in Syria and its call for building an international coalition to confront ISIS. As usual, opinions have varied. Some have viewed this as an opportunity to seek a solution to Syria's intractable conflict; others have voiced alarms about Russia's actions and motivations and cautioned against cooperation. And, as usual, the reasons and context for both positions and those in between are complicated, nuanced, and everchanging.

Carnegie Corporation of New York asked a number of leading Russia experts to weigh in on this urgent debate. Do Russia and the United States have a shared objective concerning Syria? If so, how can they settle the most divisive element in their current positions, which is the future of Syria's president Bashar al-Assad? And Is it possible for the United States and Russia to cooperate in ending conflict in Syria and defeating ISIS and, if yes, what are the necessary steps toward it?

Interim Director, Center for International and Security Studies at University of Maryland

Last spring and the year before, a group of students from the University of Maryland's School of Public Policy addressed this basic question in joint policy exercises with their Russian counterparts from the Institute of U.S. and Canada Studies' School of World Politics. Both times, they quickly agreed on the structure of the problem. The United States and Russia share important interests in defeating the Islamic State, protecting civilians from violence and hunger inside Syria, and preventing chaos there from spreading to other countries, but the United States sees Assad as a cause of these problems, while Russia believes that keeping him in power is essential for their solution.

In spring 2014, the American and Russian students settled on a lowest-common denominator recommendation to cooperate on humanitarian aid. By spring 2015, The Islamic State's position had strengthened substantially and the civilian death toll had topped 200,000 with no end in sight, so the American students decided to follow Secretary of State Kerry's lead by signaling some flexibility on Assad long enough for an international coalition to defeat ISIS and negotiate a political settlement to the Syrian civil conflict. Almost immediately, though, the Obama administration got so much criticism from both ends of the U.S. political spectrum and from some key Middle Eastern countries that it resumed insisting on Assad's departure from power as a precondition for cooperation, so the Islamic State got more entrenched, the killing continued, and refugees began flooding into Europe.

It was hard for the students to understand how world leaders could prioritize the political fate of one man more than hundreds of thousands of human lives, let alone peace and prosperity in neighboring countries. They were only slightly more accepting of their leaders' inability to compromise when they acknowledged the broader consequences of giving up on either principle at stake. Putin has justified blocking any type of international action besides talking as defending the norm of non-interference in the internal affairs of sovereign states (except at the request of their leaders or with Security Council approval.) The United States counters that the responsibility to protect civilians is part of what makes a sovereign legitimate and the international community worthy of that name. Few Americans, Russians, or Syrians would want to live in a world where either principle always trumps the other, but the current situation violates both principles and many other values.

Given the political challenges of balancing these conflicting principles and interests enough to achieve even lowest-common-denominator forms of U.S.-Russian cooperation in Syria, it is no surprise that both countries have been providing their preferred set of actors in the Syrian civil war with progressively more significant military aid, hoping to change the facts on the ground enough to achieve their political objectives without having to compromise their core values. The United States has progressed from giving moral support and humanitarian assistance to those it identifies as the "democratic opposition," to military training, weapons, and airstrikes. Russia has provided progressively more advanced weapons to Assad and now is conducting airstrikes, too, against those it calls "terrorists" in parts of Syria where the U.S.-supported insurgents are strongest.

Putin's primary objective may be to underscore that the United States and its allies cannot advance any of their objectives in Syria without respecting Russia's interests and requesting Putin's help. But each Russian airstrike makes that politically harder for the Obama administration to do. Maybe it is time to change the focus of conversation from a thumbs up or down on Assad, or from abstract arguments derived from competing principles, to a set of specific behavioral rules that could make it possible for Obama, Putin, Assad, and other international leaders to coordinate and cooperate enough to protect Syrian civilians from violent non-state actors.

As a practical matter, that would require the United States and other countries that want a political transition in Syria to agree that they would subordinate that objective until more vital objectives have been achieved so long as the Assad regime and its allies agree not to target Syrian civilians or engage in other specified actions that undermine the two common objectives, regardless of whether or not that's the intended effect. It's hard to envision how to blend principles, power politics, and pragmatic joint actions to advance shared objectives when U.S. and Russian interests and values seem starkly at odds in Syria and many other parts of the world. But it was equally hard to imagine that the United States and Russia could convince Assad to give up his chemical weapons until it actually happened.