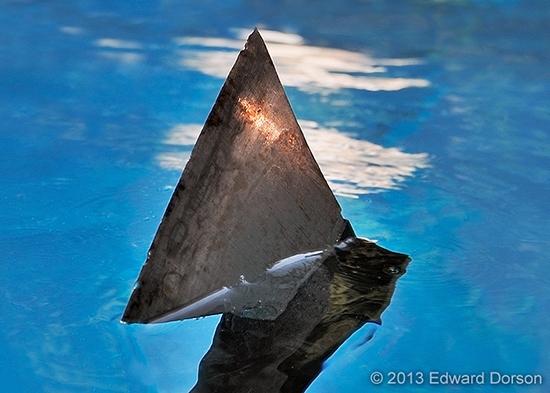 Nearly three years ago, I wrote "Shark and Awe in the U.S. Senate", my account of the near-death experience that the Shark Conservation Act of 2010 endured before it was resuscitated in the 11th hour of the 111th Congress. The 2010 Act eliminated enforcement loopholes from the Shark Finning Prohibition Act of 2000 and expanded deterrents against shark finning, the grotesque practice where the fins (worth up to $800 a kilo) are sliced off after capture and the less valuable mutilated shark is thrown overboard to slowly die. This carnage satisfies China's and the prospering Pacific rim's appetite for shark fin soup, an expensive luxury dish served at banquets and weddings that's perceived to elevate social status.

Under The Shark Conservation Act of 2010, aside from an exception made for smooth dogfish sharks as a compromise, all sharks captured within U.S. waters or caught anywhere by U.S. flagged vessels will now have to off-load sharks with their fins naturally attached. In addition, the Act also contained measures to promote shark conservation internationally, such as sharing information on vessels fishing illegally. The Shark Conservation Act was a much-needed stepping stone for the U.S. towards addressing the unsustainable slaughter of at least 100 million sharks a year, along with the loss of their essential role in preserving ecosystem balance, such as regulating aquatic species' populations and distribution.

Meanwhile, over the past few years, heartening gains in shark conservation have been achieved worldwide. Several nations have recognized the urgency of many shark populations plummeting more than 90% from historic levels. Unlike bony fish that are considered sustainable for exploitation, cartilaginous fish such as sharks and rays are terribly vulnerable: they grow slowly, are slow in reaching sexual maturity and give birth to only a few pups at a time. Palau, the Marshall Islands, the Cook Islands, New Caledonia, the Maldives, Honduras, the Bahamas, Tokelau and French Polynesia have all declared their territorial waters as shark sanctuaries. These shark havens are combating the threat of extinction head-on: any capture of sharks is forbidden, even those killed accidentally as bycatch must be returned to the sea intact.

As for the U.S., ten states and territories (and counting) -- American Samoa, the Northern Mariana Islands, Guam, Hawaii, California, Washington, Oregon, Illinois, Maryland, Delaware, and New York (awaiting the Governor's signature) - have addressed the unsustainable killing of sharks by enacting prohibitions on the ownership, landing and trade in shark fins. Chicago, San Diego, Los Angeles, Honolulu and San Francisco had served as significant import and export hubs for the international trade in shark fin. With the inclusion of New York City, the largest port on the East coast engaged in the trade in shark fins will be closed off.

Deplorably, all these U.S. state and territorial gains in shark conservation are now on the chopping block. On May 2, 2013, under the oversight of the National Oceanographic and Atmospheric Agency (NOAA), the National Marine Fisheries Service (NMFS) issued its proposed implementation ruling on the Shark Conservation Act. The ruling is strewn with overreaching regulatory language: "these [state and territorial shark fin] statutes have the potential to undermine significantly conservation and management of federal shark fisheries." It also "argues that these state or territorial shark fin laws are preempted if they are inconsistent with federal fishery management plans or regulations."

Official pronouncements pairing off amorphous verbiage (e.g. "undermine significantly" or ''inconsistent'') with concise outcomes ("state or territorial shark fin laws are preempted") don't offer reason, they're meant to be absorbed, not considered. If you view such statements as if examining a pictogram, their meaning becomes much clearer: "Preempted" is a powerful tool within NOAA-NMFS's lexicon -- and a weapon upon the well-being of our oceans if not used wisely. If preempted, states and territories that democratically enacted shark fin bans would be coerced into opening their markets to shark fins, a form of forced subsidization for the fishing industry.

As reported on June 28, 2013 in Hawaii News Now, NOAA's Regional Administrator for the Pacific Islands Regional Office, Michael Tosatto, gave this blunt assessment: "Those sharks are not a conservation issue so to prohibit the fins from being possessed creates a problem." He added: "There is little likelihood that the state would be able to prevent the landing, possession and sale of shark fins landed in Hawaii." As the public comment period on this proposed ruling is still open for further consideration until July 31st, Michael Tosatto's "little likelihood" prediction suggests a bias that seriously interferes with NOAA's ruling process.

NOAA and NMFS are obligated to adhere to ten National Standards governing fisheries management within The Magnuson-Stevens Act (MSA), including Standard 5: "Conservation and management measures shall, where practicable, consider efficiency in the utilization of fishery resources; except that no such measure shall have economic allocation as its sole purpose." Establishing and expanding markets for fish products, particularly for a home-grown shark fin cartel, obviously ignores U.S. policy on advancing shark conservation.

While NOAA and NMFS is charged by MSA with achieving a balance between "conservation and management," they're also under the umbrella of the Department of Commerce, where commercial applications increasingly taint considerations of conservation. This isn't bureaucratic tunnel-vision at work, it's a calculated effort directed by the guiding hand of fishing interests.

To be more precise: many signs trace back to the regional fisheries councils, uniquely exempt from any conflict-of-interest laws, who advise NOAA-NMFS on establishing "maximum sustainable yields" (in practice, the cyclic boom-and-bust management formula that could empty our oceans by mid-century). Of the eight councils, the Western Pacific Regional Fishery Management Council (WESPAC) was the most obstinate group in opposing the fin bans. WESPAC's primary tactic in opposing the region's fin bans was to assert that the state and territorial bans would conflict with federal law, a contention that was dismissed as the bans were shown to assist, not hinder, federal fishery management. Yet this same threat of preemption is being mirrored in NOAA-NMFS's proposed implementation ruling. WESPAC is renowned for their chronic mismanagement of the seas surrounding Hawaii, Guam, the Northern Marianas, American Samoa and the Line islands. This is a vast area that still has sharks to plunder for rapid sale with nearby reopened shark fin markets if NOAA-NMFS's proposed ruling becomes finalized.

With the issuance of this proposed ruling, NOAA-NMFS has seemingly strayed from fulfilling its science-first mandate. The newly honed edge on this Shark Conservation Axe is clearly aiming for more profit for fishing interests by getting (or forcing) shark fins into every market possible, the precautionary principle cast aside. The importance of getting involved to counter a final rule that would jettison all the gains achieved in U.S. states and territories for shark conservation can't be overstated.

Public comments challenging this implementation rule must urge NOAA-NMFS to reconstruct their preamble language and extract the proposed state and territory preemption rule from within the Shark Conservation Act while keeping the rest of the Act intact. Reviewing comments already submitted as attachments by NGOs and state and territorial legislators can help in preparing a valid letter of objection, but unless armed with a similar level of knowledge and expertise, it's best to express your demands by signing the following four online petitions (which will be delivered on the deadline date of July 31st):