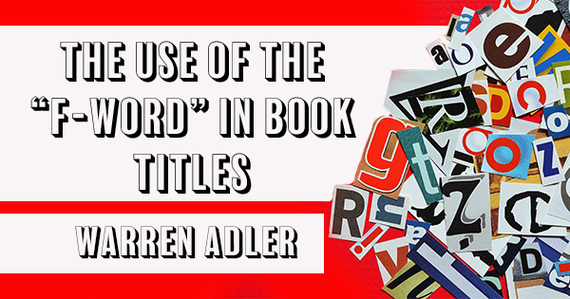 While the use of the F-word in books, movies and other media is now as common as oxygen, I recently read that it is now making its way more than ever into the actual titles of books, and is becoming a prominent feature in their cover designs, certainly destined for even greater proliferation. To those of us who grew up unaccustomed to that infamous word as a descriptive expletive, it does come with a wink and a gulp.

When I was growing up during the depression in Brooklyn, the verbal or written use of the F-word was practically non-existent. Of course it was out there, but I rarely heard it spoken even where boys of that time congregated in the schoolyard, the playing field, and the traditional indoor and outdoor hangouts. I can't speak for women, but I would bet the barn that the F-word and all it stood for was locked in a vault of deep mental suppression.

There were so called "cusswords" bandied about but they rarely attained the singularly black reputation of the F-word. That word was the big No-No of my childhood and adolescence. The pervasive threat in my domestic household was that my mother would "wash out my mouth with soap" if I uttered words that barely approached the level of condemnation that the F-word connoted.

To give some idea of the restrictive language in the public sphere, when in 1939, Clark Gable uttered that famous line that ended the movie Gone with the Wind, "Frankly my dear, I don't give a damn," it was considered a public language breakthrough so shockingly offensive that the then censoring organization, The Catholic Legion of Decency, threatened their usual boycott. Their influence gave rise to the famous "Banned in Boston" slogan, which, believe it or not, set the tone and the measure of what passed for decent language in books and other media in those bygone days.

Indeed, in those days before World War II, which still lives remarkably accurate in my memory bank, language with blatantly sexual connotations was an underground phenomenon. While the F-word, which was allegedly "invented" as both a description of sexual intercourse and a dark and angry descriptive curse dates back to somewhere south of the sixteenth-century, it had an underground print heyday in Victorian times and was a useful tool to stoke the fires of sexuality.

The dam of the F-word prohibition seemed to have been broken during World War II when it became commonplace for the F-word to be used descriptively in every possible variation. Words and phrases were uttered with the F-word to describe every person or object on earth. It was as if nothing could be described at all with out the use of the F-word. Cities with dual names like San "effing" Francisco, Los "effing" Angeles, and New "effing" York will give you some idea.

It was in common use in every possible variation as in the following: "pass the effing butter," "where is the effing wrench," "where is the effing toilet," "its effing raining," "wipe that effing grin off your face," "off to get my effing pipes cleaned"--and on and on. When the boys came home they did not vacuum their language, although it was still considered a no-no in all forms of popular media.

I vividly remember somewhat of a breakthrough when The Naked and the Dead by Norman Mailer was published with copious amounts of the euphemism "fugging," which was used throughout the novel that dealt with World War II events.

In some of my earlier novels when the word was still in negative territory I used every creative skill I knew to come up with substitutes for the word and for the act that it described. As an aside, I am sure there are people still alive who remember the phrase "everything but" and the creativity required to achieve a satisfactory outcome. Looking back, some of the words I came up with to describe the act of copulation are objects of amusement and ridicule--especially by my own children.

Fast forward to modern times where the use of the word is as common as the definite article. It has crept into every facet of our lives, particularly the movies we watch, which when enumerated, often uses the word hundreds of times in a single feature.
For someone like myself who grew up in a language restricted environment, I cannot quite shake the sense that still resides in my psyche and I often wonder if such propriety was more reflective of civilized conduct than the laissez-faire world in which we now reside.

What are your thoughts?

Warren Adler is the acclaimed author of The War of the Roses, a masterpiece of macabre divorce adapted into the BAFTA and Golden Globe-nominated hit film starring Danny DeVito, Michael Douglas and Kathleen Turner. His newest historical-fiction thriller, Mother Nile, is now available.