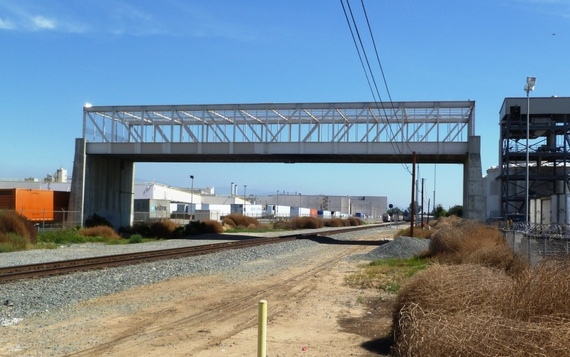 Even by the mid-San Fernando Valley's standards, Woodley Avenue is a hard street to love. The north-south thoroughfare starts off promising enough, bisecting the pastoral Sepulveda Wildlife Basin and Woodley Creek. North of Victory Boulevard, however, Mr. Hyde takes over, assuming that familiar Valley identity of an overly wide, pedestrian-hostile boulevard pockmarked by auto shops, industrial behemoths, forlorn mini-malls and stucco overkill. Two blocks north of a dusty RV park near Strathern Street, a single railroad track cuts across the road. The track is used by Metrolink and freight trains, but it's what lies a scant one hundred feet east of Woodley that elevates this hardscrabble section of Van Nuys from the mundane to the mysterious.

Over this railway is a steel bridge suspended in air. Well, not exactly suspended, but supported by reinforced concrete on both ends. However, the bridge does not connect to anything. It is truly a bridge from nowhere... to nowhere.

Newer or younger residents of Los Angeles are often puzzled by the abandoned overpass. A man at a local business called Bar Depot observed, "It looks like the kinda place where a kid might get into trouble." Friends of mine who work for a social media company on nearby Raymer Street assumed it was some sort of "weigh station" for trucks belonging to Anheuser-Busch Brewery, which occupies the land north and south of the railroad tracks. The bridge does in fact belong to the beer conglomerate. But its original purpose was far more ethereal. To me, it will forever represent a transport back to carefree weekends in the Valley.

But first, we must flashback to 1966, when Busch Gardens opened up around the corner on Roscoe Boulevard. Guests would enter under monorail tracks that were a central feature of the nascent park. Climbing into my "SkyRail" car, I can still remember the potent smell of fermented yeast as we were whisked into a cavernous, vat-laden brewery to Ed McMahon's familiar baritone, celebrating the wonders of beer-making through tinny speakers. Anheuser-Busch, I salute you... for imprinting my impressionable olfactory receptors with a lifelong love of brewskis. This was how things worked back then. Kids were regularly plunged into adult worlds and expected to simply abide. And Busch Gardens had plenty to offer grown-ups, like free beer at any of its five pavilions. Still, while boat rides through lagoons and tropical bird shows were fun for the whole family, the park couldn't hold a candle to the thrilling attractions of Disneyland or the newly opened Magic Mountain up the freeway.

So, in 1972, Busch Gardens added rides. Here's where our mystery gets solved. To accommodate the park's five-acre expansion, a pedestrian bridge was built over the railroad tracks. It led to a log ride known as the Ya-Hoo Flume, which entered a giant misty aviary with waterfalls and squawking parrots that flew freely. It's only now, when I look at old photos of the ride, that I realize the "logs" were in fact replicas of wooden beer kegs. (Again, get 'em while they're young!) The SkyRail was also expanded to encompass the entire park. Its tracks were connected to the west and east sides of the bridge. One of my most vivid Busch Gardens memories was standing on that bridge and watching workers clumsily attempt to shoo a wayward peacock off the monorail tracks, a source of subversive delight for us kids.

Alas, Busch Gardens never made it out of the 1970s, bulldozed so the brewery could expand its distribution operations. Recently, feeling nostalgic, I somehow talked my way onto the Anheuser-Busch property to see if any employees remembered the park. In the parking lot, I approached a bald, middle-aged machinist named Rick at the end of his shift. After grilling me about how I got through security, Rick's eyes lit up when I mentioned Busch Gardens. "Oh my god, I used to sneak into the park!" he said. "Right through a side fence by the bridge." Rick was so obsessed with the park, he started working for the brewery in 1980 - one year after it closed - and has been here ever since, touting the company's free beer for employees. He pointed out that, in addition to the bridge, remnants of the monorail track remain, visible from Roscoe. They've been repurposed to ferry beer to the packaging department. I asked him why he thought the bridge remains despite not serving any purpose. He rubbed his thumb against his forefingers, the universal sign for money. "Cheaper to keep it up than tear it down," he said.

In today's profit-driven world, boozy theme parks that inspired The Simpsons' satirical "Duff Gardens" aren't exactly good business policy anymore. But every time I drive by this nonsensical bridge, it's nice to know it's still there. Like the feral parrots that loudly roam our city's treetops - supposed descendants of birds that escaped when Busch Gardens closed - bridges to lost L.A. still abound if you squint hard enough through your beer goggles.