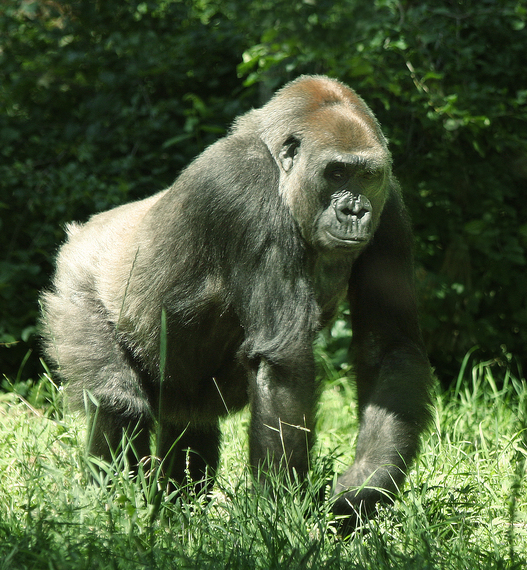 What is your response to that statement?

I have seen no such argument in response to the death of Harambe, the Western Lowland Gorilla who was shot on 28 May at the Cincinnati Zoo. Zookeepers understandably feared for the life of a child who entered his enclosure. The incident has created furor.

Mainstream media depicted the shooting as a tragic necessity because the child was at risk of grievous harm or death. Whether implicitly felt or explicitly stated, the assumption was that the life of this child is more valuable than the life of this gorilla.

This was the view of Jack Hannah, the well-known conservationist and former director of the Columbus Zoo. In a host of interviews, he clearly stated that the decision to kill Harambe was an easy call because every human life is more valuable than any animal life.

For her part, the child's mother, after insisting that she is a responsible parent, asserted on Facebook, "God protected my child until the authorities were able to get to him." Then she thanked those who saved her son and "most importantly God for being the awsome (sic) God that he is." She apparently believed that God had intervened, even at the price of the Gorilla's life.

She did not explain why God did not elect to protect her son by more peaceful means, such as, by preventing him from climbing into the enclosure.

In contrast, a host of critics were outraged by the killing and what they considered the mother's negligence.

Especially upset were animal rights proponents, who base the value of animals on emotional or cognitive traits they are believed to share with us, or on their capacity to suffer. For them, the great apes, our closest biological cousins, have rights that deserve respect, foremost, the right to life.

But I could find no one making a reasoned argument that this gorilla's life was more valuable than that of this human child.

Some environmental philosophers and scientists, however, contend that an individual member of an endangered species is more valuable than an individual human being. Or, as conservation biologist Reed Noss put it to me recently, the value of an individual decreases proportionately with the size of its population.

Such arguments are premised upon an understanding that the viability of a species is associated with the variety of genes in its population: With few exceptions, the greater its genetic diversity the greater will be a species' resilience in the face of diseases or environmental threats. But the smaller the population is, the higher is the risk of extinction. Consequently, every individual matters.

So, if one starts from an ethical claim that humanity ought not drive other species off the planet, and add scientific understandings about the value of an individual organism to the viability of its species, an endangered animal such as Harambe could be considered more valuable than one that is not valuable in this way.

The argument is as worth pondering . . . and so are our reactions to it.

Our reactions to the value of humans and other animals are typically shaped by culturally deep religious roots.

Put simply, most large human civilizations have religious roots and strong constituencies, which either view humans as a special creation of God, or consider humans to have become the highest and most valuable life forms by leading meritorious past lives.

Whatever ground for felt ethical obligations toward non-human organisms there might be given such premises, when push comes to shove, human lives come first.

In contemporary environmental philosophy, such views are termed anthropocentrism or literally, human-centered ethics.

That is a nice way of putting it.

But it is really the ideology of human supremacy.

Harambe's demise may not provide a perfect fit for considering the proposition with which I began my provocation. The Zoo had frozen semen taken from him because it is part an international consortium that understands the importance of genetic diversity for efforts to save endangered species. Moreover, Western Lowland gorillas have more habitat and greater numbers than great apes that are on the very brink of extinction.

And perhaps, this case will help those who are skeptical of the religious ideas that undergird human supremacy to leave them behind, once and for all.

It may be that corresponding conservation policies and efforts would follow is such a value transformation spreads.

Indeed, there are signs just such a transformation is under way. It can be seen in the work of Dian Fossey who risked her life and was killed while trying to protect endangered gorillas, and as rangers are empowered by law to use lethal force against poachers. So, we have examples where the lives of endangered species are considered to be more valuable than at least some human lives.

I hope that zoos will soon, and universally, be on the leading edge of this transformation, rather than reinforcing ancient and self-serving human conceits.