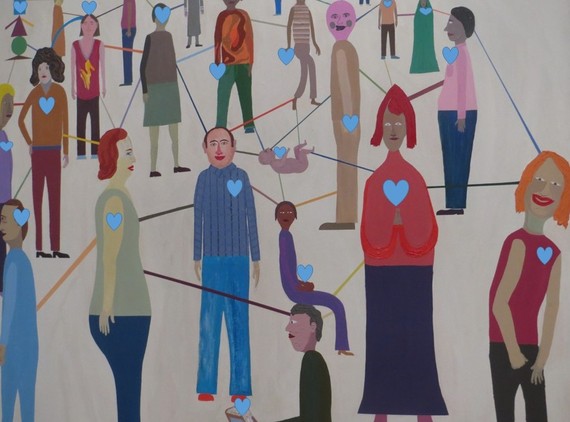 A couple of years ago I ended the last chapter of my book, "Big Bang Being", citing Chris Bache and his suggestion that we might be entering the era of Homo Spiritualis. It may sound strange at a time when just skimming the news we get a feeling of chaos and profound disruption of the world as we knew it: whether it's because of the impact of external factors - fires, droughts, flooding or earthquakes-- or because of human created conditions-- migrations, extreme violence, far-right movements, or the clash between the gas and oil industry and people standing up to protect nature.

In contrast, as I was attending the Companies versus Climate Change Conference over the past days, I was delighted to see the increasing number of corporate examples of businesses that are using innovative practices and developing products by screening all their decisions through the filter of sustainability and ecological footprint. Young entrepreneurs and large corporations alike, they were a testimony to behaviors and mindsets that are reshaping the business world. That came only a few days after over 300 business leaders had signed and submitted to president-elect Trump a petition to respect the Paris Agreement and continue supporting the US environmental actions. The former Rainforest Alliance President and current Director of the Center for Sustainable Business at NYU Stern, Tensie Whelan, reminded the audience concerned with the potential impact of the new administration on climate initiatives, that, of the US latest GDP of close to US$ 18 trillion, US$ 15.6 trillion came from business in the US. Business is not waiting for the Federal Government to tell it what to do, and today less than ever.

Now we may raise an eyebrow at the thought that any 'values' revolution can be spearheaded by the power of corporations. But let's ponder for a moment what business is about.

First, it is a compound of large, medium and small enterprises, which in itself has a number of implications. Small enterprises are usually very sensitive to local needs, and tend to develop products or services addressing those needs. Larger enterprises on the other hand have a broader perspective, since they have to understand the needs of diverse markets: regional, national, and international. Innovations that reach higher environmental standards tend to act as benchmarks and open the path for replication in other places, therefore raising the bar globally.

Second, whether large or small, business is the in-between factor between nature and consumers. As Tedd Saunders, Chief Sustainability Officer of the Saunders Group of Hotels put it, Nature is a strategic factor, which his business clearly learned as, first hurricane Sandy, and later an intense snow fall, left one of the chain's hotels without power for six days. And consumers are being educated on the corporate practices behind a brand in their shopping cart, an education that in some cases influences decisions, and in other cases creates an uncomfortable tension. Some consumers might feel "I don't like to fuel my car at the gas station because I don't support the dirty energy industry, yet I cannot afford a Tesla or the inconvenience of biking".

That tension, sooner or later, is seen as an opportunity for innovators, who find niches that are just waiting for new solutions. A recent Xmas video by a Spanish initiative showed different young people struggling with what gifts to buy for the holidays, for their parents, girlfriend, sister or grandparents. Each one of them came up with a great idea, and as the presents were unwrapped, we could see the joyful faces. "You can wear any of my clothes", was the message for a sister. "I will go back to having dinner with you on Fridays", was the message for the grandparents. "I will switch off my phone for our meals", was the gift for the parents. The bottom line was: in this holiday season, don't buy stuff. Make yourself the present.

The 2012 Mayan Prophecy indicated that humanity would enter into a new phase of evolution. If we look at the troubling news, showing us injustice, violence, and much suffering caused by our short-sighted actions, we may be led to think that the evolution is spiraling downwards toward chaos. However I see something different. I see that the exposure of unfairness and injustice is today more than ever shaking us up, like a drama that is too strong to ignore. For the first time in history 195 countries agreed on something: the urgency to protect the planet and to act with no delay. The American clothing company Patagonia announced that all its Black Friday revenue, which they estimated at US$2 million, would be donated to grassroots nonprofits working on the front lines to protect our air, water and soil for future generations. In fact, the sales reached US$ 10 million, indicating the value based behaviors of their customers, speaking with their feet and wallets.

What I see is that- intentionally or not- we all are individual triggers, with our reflections, blog posts, pledges, campaigns or conversations with our friends. Perhaps we are discovering that we have been shaping the world with our actions, and that means that we can start shaping it as we really would like it.

Now, that is what I call the Values R-Evolution. Worth a try.