Over Budget - Mathis Wackernagel loves the outdoors. As a sustainability advocate, he travels the world to inform audiences about the global ecological footprint concept. How does he balance his travel schedule with his urgent call for less emissions in the world?

Mathis Wackernagel, President of the Global Footprint Network, has been preaching his message about humanity's ecological footprint and what he calls "ecological overshoot" for more than a decade. These concepts both relate to the consequences and effects of economic growth worldwide. The ecological footprint, conceived by Wackernagel, is a tool that measures economic supply and its demand on nature.

Humanity's demands have been exceeding the biosphere's supply since the 1970s, a phenomenon called ecological overshoot. Each year, the day on which humanity's resource consumption for the year exceeds the planet's capacity to regenerate those resources that year moves earlier on the calendar. In 2015, it was August 13. This year, it is August 8.

What does this mean? "It means that overshoot is structural. It now takes the Earth more than a year and a half to regenerate what humanity uses in a year," Wackernagel says. "Even if the date of Earth Overshoot Day stayed the same, that would not be helpful. That it keeps coming earlier means that we have not bucked the trend yet," Wackernagel says. 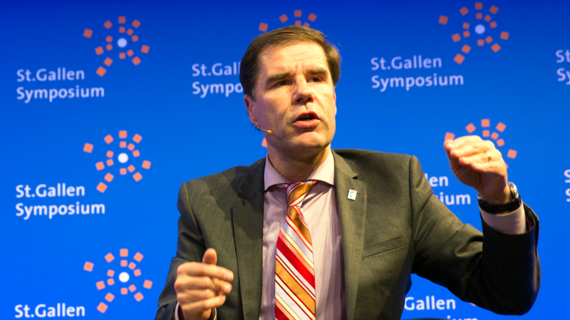 This trend cannot go on for ever. "Will we get out of overshoot by design or by disaster? That is the big question," Wackernagel says. According to him, humanity still has a choice. "But we are not choosing wisely. I think we can still take fate into our own hands. It is like with money: why we cannot choose the same way we do about resources? Why can we work with budgets for money, but not for natural resources?"

Can humanity as a whole really decide to take natural resources into account? Even Wackernagel admits we cannot afford to stop expanding, but unrestrained consumption of natural resources is not the way to do it. "We do not produce anything when we extract natural resources," Wackernagel says. "It is like moving money from your savings account to your checking account, and considering it to be newly earned money. Of course, it is not."

Still, Wackernagel is no pessimist. "I have total faith in humanity's ability to deal with it. It is not like an asteroid that will hit us. We can transform our systems. It is technically and financially possible." The Swiss-born scientist proclaims that he is a technological optimist, but technology on its own will not change the trend yet. "What holds us back - despite urgent warnings from the UN, for instance - is that we do not see it for the true challenge it is. We cannot see beyond growth, even though we cannot go on forever like this. What happens if we cannot have growth? We are not thinking imaginatively enough about it."

Many initiatives surrounding sustainability nowadays are about "awareness." "I still do not entirely understand what this means," Wackernagel says. "I wonder if it really changes our fundamental behaviour. The values we have, about growth for example, do not shift easily, even if they are not based in reality anymore."

Wackernagel hopes that his Work Session at the 46th St. Gallen Symposium may have contributed to the shift. "I hope that people have been a little bit disturbed, but not so much that they have been disgusted. And intrigued enough that my talk stuck with them, that it kind of nags and makes them ask themselves: what shall we do? What are the possibilities now?"

Even for someone like Wackernagel, making a real difference feels like a challenge. Take travel: A rough calculation by the magazine suggests the cumulative distance travelled by all the symposium's visitors amounted to flying around the world 50 times over.

Wackernagel flew from his home in California to be at the symposium. "I have solar panels at home. We have LED lights. We separate trash. I try not to waste any food. But I should have 6 times more solar panels just for my flight to Zurich, to compensate for my impact on the environment," he admits. "Let's be honest: I am adding to the problem. We could do so much better, we could achieve so much more."

The sustainability advocate is suddenly pensive. "That is why I ask myself every day: am I adding value?"

Mathis Wackernagel, President, Global Footprint Network, shared his insights on sustainability in the context of this year's St.&nbspGallen&nbspSymposium&nbsp(11–13 May 2016) held on the topic "Growth – the good, the bad, and the ugly".