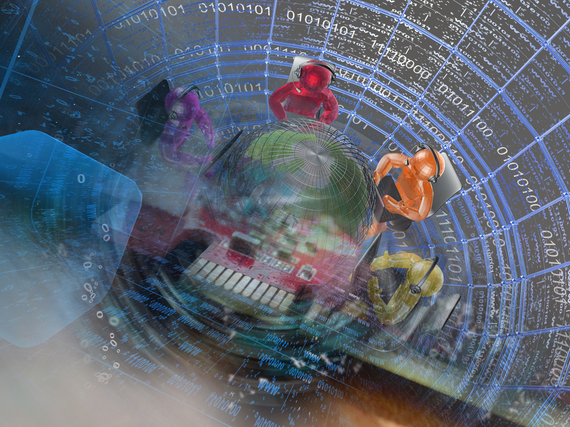 Connections are changing the world. The connectivity enabled by the Internet has huge implications for the very structure of the global economy. While estimates of the Net's contribution to economic output vary, it's generally thought that it exceeds individual industry sectors like education, agriculture, and energy. The total value of transactions occurring today online are more than all but three or four of the world's largest national economies.

In the past few years, many governments have recognized that there are momentous opportunities to increase their own GDP growth through e-commerce and digital channels, despite the economically challenging times. Data, it is generally agreed, is central to everything. As more data is produced and stored, techniques including advanced data analytics and machine learning are extracting sense and using that to improve the efficiency of systems across societies. People, places, organizations, and objects are increasingly linked together in ways that drive tangible economic gains. These changes are profoundly impacting both businesses and consumers worldwide.

But this shift to a Networked Economy raises a new set of difficult questions that will take decades to even begin to answer. Who owns all this information? How is it shared? Is it secure?

For companies with longstanding business models, the immediate challenges include preparing for the new digitally-oriented workforce and identifying how to most profitably use the new tools for projects that achieve goals like improving customer experience or optimizing productive capacity in the organization. This is not easy.

Industries that have been disrupted by digital technology are left trying to navigate and prioritize the benefits to consumers that are not measured by traditional economic measurements. For example, look at what happened to previously robust industries like video rentals. People around the world have shifted to new, more convenient and attractive ways to consume video digitally. Additionally, the bulk of book and music sales are now made online. Traditional retailers and the entire music industry are losing customers and revenues. Many more industries are being forced to make fundamental changes to avoid becoming irrelevant, as connected consumers are offered alternative ways to purchase or access everything from power tools to hotel rooms.

But the potential benefits to society of the Networked Economy far outweigh any growing pains that accompany it. To gain long-term advantages, businesses and organizations need to look beyond numbers. A shift in consumer behavior is rapidly unfolding, and businesses must be sensitive to evolving social values and customer expectations.

There is little doubt that hyperconnectivity is the cultural environment in which humanity will reside from here on out. The economic benefits of Internet adoption are undeniable in developed nations such as the U.S. and the U.K., where we have seen countless successful digital companies and services founded since the recession. But developing nations, where well under half currently have Internet access, will potentially be even more transformed.

According to Deloitte, if countries in Africa, Latin America, and Asia could raise Internet adoption to the level found in developed economies, long-term productivity would rise by 25 percent, GDP growth rates would increase by 72 percent, and 140 million new jobs would be created.

The social benefits would be huge. Average annual incomes would rise by $600 per head, lifting 160 million people out of extreme poverty. Internet-based healthcare could save 2.5 million lives, and education for approximately 640 million children would be improved greatly. Mobile technology is already substantially impacting African countries, where mobile payment systems such as M-Pesa, which started in Kenya, are empowering the unbanked. Meanwhile, doctors and teachers are using text messages and other new tools to reach more people in need.

The Networked Economy will reinvent and further globalize the world economy. It will connect individuals, businesses, and societies in real time, leading to a transformed global society that is more collaborative, intelligent, responsive, and efficient. This will, in turn, lead to dramatic increases in global productivity and economic value.

Dinesh Sharma is the vice president of marketing at the Networked Economy at SAP.
Original article published at Techonomy.com.