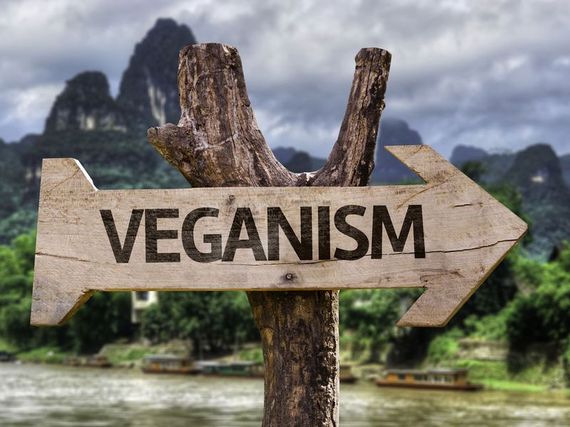 Veganism has been a relatively new addition to my personal foodscape. When I first moved to the U.S., eighteen years ago, I did not know what it was. I had never heard of veganism in Italy. At the time, it was not a common practice there (it is now). Now, although not a vegan, I can cook vegan meals. Many traditional Italian recipes are actually vegan, as meat and dairy were somewhat of a luxury until quite recently.

A few months ago I had colleagues over, and as a couple of them are vegan, I found it easier to make the whole meal vegan. And - not to toot my own horn - it was not any less enjoyable because of it. My only moment of hesitation was over the decision to use honey for a roasted carrot dish with cumin and cilantro. Some vegans consume honey while others argue that it is an animal product, and as such the result of exploitation by humans. This is a point that also the feature-length animation film Bee Movie makes, with some humor. In it, a bee convinces the insects in his beehive to stop providing honey to the humans. However, the bees also discontinue the pollination of flowers, causing havoc on the whole ecosystem. Although I do not believe it was the intention of Bee Movie to take on veganism, the plot hints to the complex relations between humans and animals, to which veganism tries to provide an ethical and political response. The presence of this theme in a children's cartoon reflects its pervasiveness in today's public conversations about food.

The motivations that lead individuals to go vegan, and the way society at large perceives and talks about them is the theme of The Vegan Studies Project: Food, Animals, and Gender in the Age of Terror, by Laura Wright, a literature professor at Western Carolina University. Although the book is not an easy read, as its language is steeped in critical and literary theory, it focuses on news, advertising, and popular culture that is very much part of our daily experience. The title itself - meant "in the spirit of play" - suggests a certain proximity of Wright's work with burgeoning fields of research such as food studies, fat studies, and animal studies. Veganism, which is now very visible in US social and cultural debates about food, health, and the environment, begs for a deeper understanding beyond any easy rebuttal.

The author's main argument is that veganism is both an identity category - just like religion, sexual orientation, or national origin - and a practice, as it reflects itself in many choices ranging from shopping to cooking. As such, its manifestations are far from univocal, and it would be a mistake to focus uniquely on the experience of white vegans. Wright frames veganism within an ecofeminist approach, examining forms of oppressions that place nature, the body, and women in direct opposition - and in an inferior position - against culture, the spirit and men. In this context, the consumption of meat is marked as quintessentially masculine. Historically, the manhood of ethnic males that consumed limited amounts of meat or preferred vegetables has often been questioned in the US. Veganism is either perceived as a challenge to mainstream food customs or instead presented as the "idealized paragon of health, beauty, and strength."

For Wright, veganism is "in stark opposition to the consumer mandate of U.S. capitalism, and for this reason the actions of individual vegans pose a substantial - if symbolic - threat to such a paradigm." The author argues that this contrast has become much starker after 9/11, when "nation, religion, and diet all functioned as the criteria by which we posited our difference - our very humanity - from the animality of our attackers." Remember freedom fries? And how comfort food came back in vogue with a vengeance? Wright points out how in this kind of rhetoric, vegans are often described as extremists, dogmatic, and irrational.

The book proceeds to examine different aspects of veganism in popular culture, from the vampires in Twilight and True Blood who refuse to drink blood, to zombies and post-apocalyptic survivors. However, I found the author particularly effective in the two chapters that discuss veganism within the wider social and cultural debates about femininity and masculinity, from the comparison of women's veganism to anorexia or, at least, a disordered eating pattern, to the symbolic emasculation of male vegan, perceived as an aspect of a supposed "crisis of masculinity." I am not sure if Wright's intention to open a whole new field of inquiry and scholarship will come to fruition, but she definitely offers many arguments that deserve attention and reflection.