Few destinations have preserved the allure of the past so completely that you can roam the streets and feel as if you have gone back in time. Venice is such a place, the past is alive and vibrant in this magical city where some things seem everlasting: the sound of the waves lapping against the Moorish style Palazzos, the winding canals and the gondoliers' serenade, the quiet of the alleyways after dark where one can hear footsteps echoing against cobblestone walls.

Not long ago I took an art history class that focused on the elegant and gracious Palladian Villas of Venice, the summer homes of Venice's aristocratic families built in the 15th century. The thought that they still stand in all their splendor enchanted me, and I knew then that someday I had to see them for myself.

So when I had the opportunity to travel to Venice recently, I knew this time I would experience the city in a way I never had before. My goal was to explore the country villas to get a feel for the lifestyle of the Venetian aristocracy in centuries past. History has it that in the 15th century noblemen began transferring their entrepreneurial spirit from the sea to the land, and so they began building prestigious mansions that would allow them to oversee their farms while providing rural recreation for their families. Less than eighty such villas have survived along the Brenta River, once the trade route for spices and salt. The most striking of these country villas were built by famed architect, Andrea Palladio, whose architectural designs were replicated in Thomas Jefferson's residence and in the White House.

Back then these grand villas and their gardens were private paradises where the laws of normal life seemed suspended when the aristocracy summered in the country. For them the aim of the country holiday season was to make merry, to search for love, to welcome crowned heads and grand-dukes, to savor music and dance, all while governing their estates. These country holidays were so rooted in the Venetian way of life that even ambassadors rented villas so they could join in the great occasion. 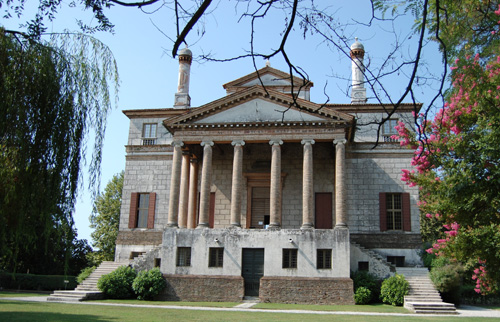 It was easy to imagine why when my Palladian Villa tour guide, Rita, paused as we approached a villa with a breathtaking façade designed to look like a Greek temple, rising high above the Brenta River. "Just look at the magnificent view of La Malcontenta," she said, her voice full of pride. She went on to say that the Villa had been commissioned by the Foscari bothers, one of Venice's most noted doges. As I walked into the reception floor, known as the piano nobile, I caught my breath, the interior was splendid, full of richly decorated frescoes by the noted painter Zelotti. While Rita explained each fresco at length, two stood out in particular. The first adorned a space that resembled a dinning room, in it Zelotti had depicted the mythical story of the killing of the giants. The giants were lying on their backs, being mercilessly crushed by stones hurled down by the gods. I glanced at Rita, "It's beyond me how anyone could enjoy eating spaghetti with this gory scene around them, no matter how beautifully it is painted." Rita just laughed. "Come," she said, with a gleam in her eye, "let me show you something more interesting."

I followed her into a bedchamber. "The fresco in this room depicts the wife of one of the Foscari brothers," she told me. "Legend has it that the Villa's nickname, 'La Malcontenta,' may have it origins from this lady, who was allegedly locked up in the room while her husband was away on long trips. He seemed to have a nagging fear that she was unfaithful to him." I could imagine why "La Malcontenta" would be an appropriate name for the lady as well as the house

As we left, Rita pointed out more villas along the river: Villa Allegri (at least this one means happy); Villa Moro (the oldest remaining villa in the area); Villa La Bon Boniera de Canale (a nickname for a sweet box that is given during a marriage ceremony); and Villa Gradeneggo (the owner blew up part of the property with dynamite because he was fed up with the high property taxes).

We stopped at Locanda Alla Posta, where in the 16th century riders would exchange exhausted horses for a fresh mount during long journeys, and then headed for the magnificent 18th century Villa Pisani, known as the Versailles of the Brenta River. Here the Pisani family built an elegant hundred and forty room mansion with an opulent ballroom and frescoes painted by Tiepolo, the great 18th century master. As celebrated is the garden, where between the orangery and the Villa is the jewel of 18th century gardens: the Maze of Villa Pisani, a labyrinth of box hedges that quickly became the symbol of a society and its tastes. Today it is common to see a tour guide standing in the center tower of the labyrinth, directing lost tourists out of the maze's nine concentric circles. Rita pointed to a beautiful house at the end of the garden and asked, "What do you think this lovely structure was used for?" "A guest house?" I replied. Amused and waiting to see the shocked look on my face, "No. These are the stables complete with frescoes and all," she declared. I shot a picture of the stables that you see below and sent it to my family and friends in Los Angeles. Hands down everyone voted that they would have liked to have come back as a horse on this estate. Of course such opulence demands upkeep, and maintenance of the villa was so expensive that the Pisani family later sold it to Napoleon, who in turn gave it as a gift to his ex-wife's husband -- Napoleon must have really been thankful to get his ex-wife off his hands. 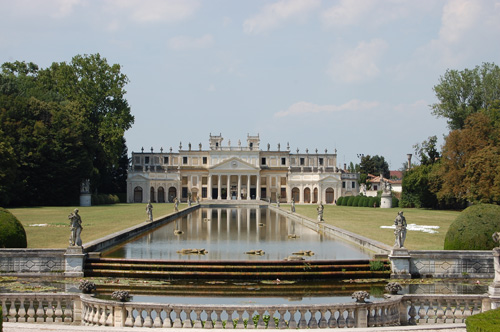 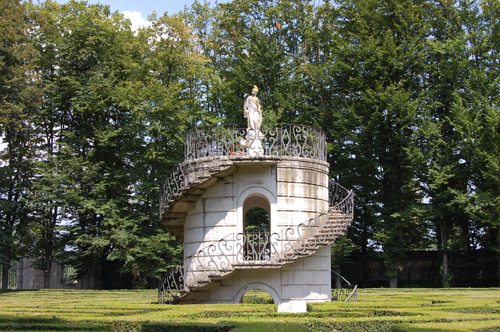 The last leg of our tour took us to Villa Barbaro and Villa Emo. Villa Barbaro, considered one of the most outstanding examples of 16th century Palladian architecture, boasts exquisite frescoes by Paolo Veronese. The villa is flanked by adjoining farm buildings, known as barchesse, for storing grain and wine, and for housing farm animals. At the ends of these structures, Palladio surmounted dovecotes, embedding their facades with sundials. "This is where they raised pigeons and doves for food and also for sending messages to nearby towns," Rita tells me. I imagine the doves aloft ferrying messages of love and of secret trysts. Hmmm, I wonder, perhaps that's how La Malcontenta got into trouble in the first place. 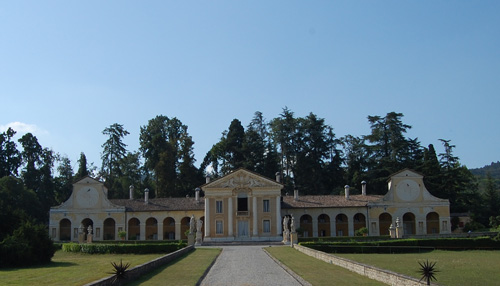 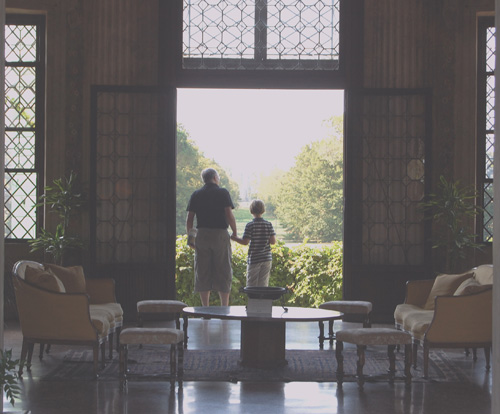 For 450 years Villa Emo stayed in the Emo family, one of the oldest in Venice. But, in 2005 it was acquired by Bank Credito Trevigiano which now protects the mansion as a "world legacy." Simple in form, without lavish decoration, I couldn't help but marvel at how skillfully Palladio combined elegance and symmetry with functionality in Villa Emo. For instance, rather than the expected staircase, there is a gentle slope leading up to the Villa's front entrance, making it easy to roll barrels of food and wine into the house. Inside, most rooms enjoy beautiful views of the lush garden landscape below, again bringing to mind the Venetian social summers of centuries long past. While standing at the entrance of the Villa Emo, I saw a grandfather and a grandson gazing at the majestic view outside, and I could almost imagine how it was back then, generations of Venetians coming to their villas, leaving the daily routine of their city life behind in the hope of a little summer fun.