In the midst of the unrest this year in Venezuela, there was little attention paid in the media to the conditions facing Indigenous peoples in that country and where they stood in regard to the anti-government demonstrations. This might be because the truth on this issue does not match up with the media's anti-Venezuelan government narrative. 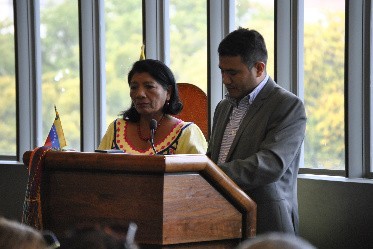 There are around 38 different indigenous groups in Venezuela, making up approximately 2% of the total population of 26 million. The most sizeable indigenous nation, of approximately 300,000 people, is the Wayuu Nation whose people live largely in Zulia - a territory in the Northwestern corner of Venezuela between Lake Maracaibo and the Colombian border. I recently had the fortune of interviewing a Wayuu leader, Flor Angela Palmar de Hernandez, a Professor of Intercultural Bilingual Education and current member of the Organization of Indigenous Educators of Zulia.

We refuse to call the actions earlier this year, 'protests.' Instead, we referred to them as 'guarimbas'; as actions intended to create chaos. While the opposition would like the Indigenous to participate in these actions, that will never happen. Indeed, the 'guarimbas' did not take place in Indigneous lands. We are not a shameless people, and we will not legitimize the 'garimbas' which have a hidden agenda.'

According to Professor Palmar, there have been positive changes for Indigenous peoples since Chavez came to power in 1999. For one, she explained that, for the first time ever, the rights of Indigenous peoples has been enshrined in the popularly-approved Constitution of 1999, a Constitution which also guarantees Indigenous representation at the national, state and local levels.

Professor Donna Lee Van Cott, in her article "Andean Indigenous Movements and Constitutional Transformation: Venezuela in Comparative Perspective," echoes this view. As Van Cott relates, under Chavez, Venezuela went from being one of the most backwards countries in terms of Indigneous rights to one of the most progressive ones. She explains that the changes brought on by the Chavez revolution

enabled Venezuelan Indians to obtain a constitution containing the region's most progressive indigenous rights regime. Venezuelan constitution-makers incorporated most of the symbolic and programmatic rights that neighboring constitutions recognize . . . , while making several interesting innovations - such as guaranteeing political representation at all levels of government (Art. 125) and prohibiting the registration of patents related to indigenous genetic resources or intellectual property associated with indigenous knowledge (Art. 124) . . . . Symbolic achievements - rhetorical recognition of Venezuela as a 'multiethnic and pluricultural state,' and recognition of their special status by dint of including a separate chapter on 'Rights of the Indigenous Peoples' - may be enjoyed immediately. As in the other Andean cases, however, most programmatic rights require future legislation.

Still, there is much to be done. As Professor Palmar explained, they are still working on an Indigenous land law and on the process of demarcation of Indigenous lands. This is a continuing struggle largely due to the resistance of powerful economic elites -- particularly in mining, ranching and agribusiness -- which covet Indigenous land for exploitation. In addition, as Professor Palmar also explained, though with some obvious trepidation, there is the very real threat of violence by Colombian paramilitary groups which cross into areas like Zulia and engage in "social cleansing." It is believed that the Colombian paramilitaries have also been engaged in assassinations of key Venezuelan leaders, such as left-wing legislator Robert Serra earlier this month.

Indeed, according to the Minorities at Risk (MAR) Project -- a university-based research project that monitors and analyzes the status and conflicts of politically-active communal groups in all countries:

The indigenous of Venezuela have few of the risk factors for rebellion. They are minimally cohesive and have restricted their activities largely to nonviolent protests in the recent past. Venezuela is also one of the longest established democracies in Latin America. Furthermore, under the 1999 constitution passed under the leadership of President Hugo Chavez, both political and economic remedial policies are in place to address indigenous concerns.

Indigenous are likely to continue low to moderate levels of protest. While protests have been directed at the government as groups struggle for the implementation of their constitutional rights, almost all indigenous groups are very clear that they support President Chavez.

In short, the Indigenous of Venezuela do not find common cause with the elites who led the violent "guarimbas" earlier this year in an attempt to unseat Chavez's successor, President Maduro - a fact quite inconvenient to the mainstream media.