Drop to the end of Jann Wenner's Rolling Stone interview with President Barack Obama, and you'll get to the part where Wenner asks the president to talk about the music he's been listening to lately. Here's Obama's answer, in its entirety:

My iPod now has about 2,000 songs, and it is a source of great pleasure to me. I am probably still more heavily weighted toward the music of my childhood than I am the new stuff. There's still a lot of Stevie Wonder, a lot of Bob Dylan, a lot of Rolling Stones, a lot of R&B, a lot of Miles Davis and John Coltrane. Those are the old standards.

A lot of classical music. I'm not a big opera buff in terms of going to opera, but there are days where Maria Callas is exactly what I need.

Thanks to Reggie [Love, the president's personal aide], my rap palate has greatly improved. Jay-Z used to be sort of what predominated, but now I've got a little Nas and a little Lil Wayne and some other stuff, but I would not claim to be an expert. Malia and Sasha are now getting old enough to where they start hipping me to things. Music is still a great source of joy and occasional solace in the midst of what can be some difficult days.

Now, here's how FoxNation.com distilled that answer, on its website: 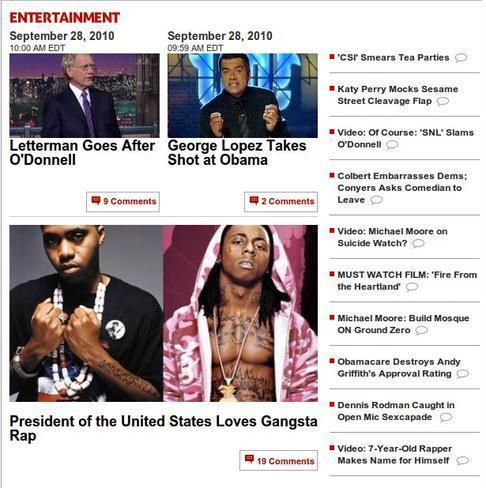 That item, on the Fox Nation website, originally linked to exactly what I've shown you, above. It's since been pulled down, probably because it was idiotic. Luckily, it was "saved for posterity" by pourmecoffee.

Obviously, I don't know how you take a guy who's way into Stevie Wonder and Bob Dylan and John Coltrane, whose "rap palate" is "improv[ing]", and who'd just been introduced to Lil Wayne by Reggie Love into a "lover" of "gangsta rap," but then I'm basically of the mind that "gangsta rap" is a quaint term that was invented by media to describe a meta-genre of hip-hop that's largely not being made these days. Ice-T plays a cop, on the teevee. Dre shills for Dr. Pepper. And Jay-Z's drug-dealing past has sort of lost its outre luster now that he's sitting for interviews with Warren Buffet for Forbes magazine, and the kids from Glee are giving his lyrics about "stash boxes" the show choir treatment... on, uhm, Fox.

If Obama had broken off a verse of "Million Dollar Corner," that would have been one thing. But it seems that Obama is one American whose iPod makes mine look dangerously subversive by comparison.

Naturally, I understand if Fox still has a beef with Nas.

UPDATE: Fox News spokeswoman Dana Klinghoffer writes in to clarify that "FOX News and FOX Nation are very much separate." You can read this article and judge for yourself how different they are -- but we've made some tweaks to the headline and text to make extra clear that this was posted on the FoxNation.com website.