On both sides of the Atlantic, a plethora of record breakers will help us spread the word. Three women with some remarkable physical attributes. A man with so much metal in him he is a challenge for every D.H.S. officer out there. A musical instrument so large it takes four men to play it. It takes quite a mental and physical effort to gather these people and then ferry them around the inevitable press junkets. A few years ago our special guest was Mr. Sultan Kosen. Aged just 28, Kosen is the tallest living man in the world standing today at a remarkable 8 feet 2 inches. Stretch limos, business class seats, elongated beds, oversized hotel suites. Having dinner next to him in a Turkish restaurant in New York felt like sitting next to a veritable colossus. Bending and crouching are Kosen's middle names. Who knows how Robert Wadlow the tallest man ever at 8 feet 11 inches ever coped? 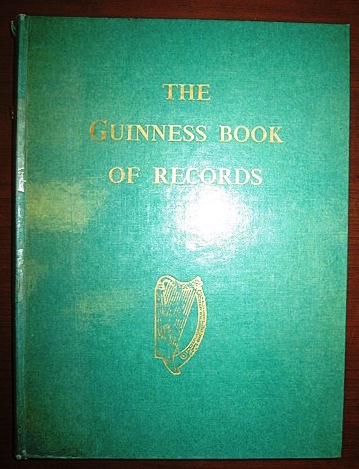 As we look to the imminent launch of the latest Guinness World Records book, it's worth giving a nod to the book that got it all started in which Wadlow was first featured. The very first edition of The Guinness Book of Records (as it was called then) was published on August 27th, 1955. It was 7 inches wide, 10 inches long, had a lime green cover and stretched to 198 pages. It was the first time anything of its kind had ever been printed and no-one had any idea what a global phenomenon they had in their hands. Indeed, it's a testament to how well that book was put together that we are still around today.

Compiled by Norris and Ross McWhirter, twin brothers who were worked in Fleet Street in London at the time at a fact-finding agency providing information to encyclopedias and newspapers, it took them sixteen weeks to put this gem together at a cost of $35,000. They fired off literally hundreds of letters to experts and consultants all over the world. Exaggeration, Norris said, was the bane of their existence. He tells the story of receiving a letter informing them that a fly in Africa had been measured in flight to travel at a speed of 820 mph. That is faster than the speed of sound! 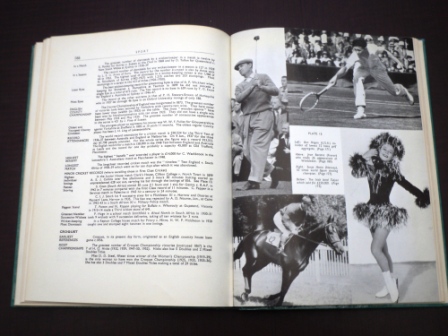 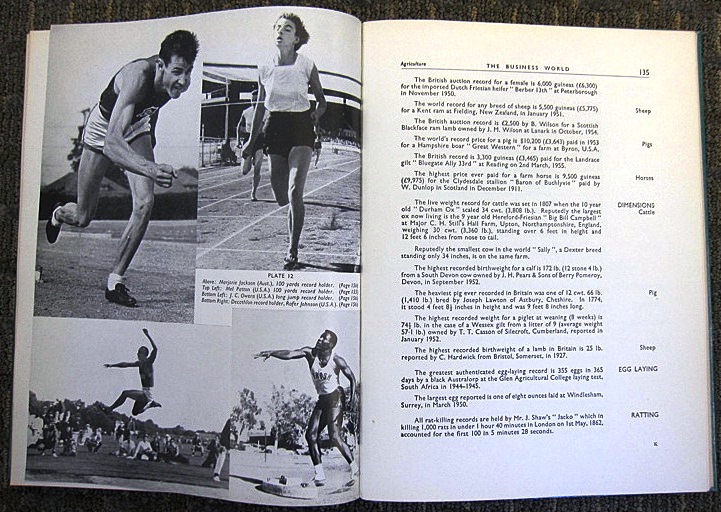 Much like today, the McWhirters embarked upon a promotional book campaign every year, first in the UK in 1955 and then in the USA where it appeared the following year. Interestingly it had about the same number of records as today's volume, approximately 4,000. No glossy full color images mind you, just eight pages of black and white photographs featuring such giants as John R. Cobb, holder of the world land speed record (one direction only) at 403.135 mph set in 1947, Manningford Faith Jan Graceful, a British Friesian cow responsible for the highest life-time milk yield (325,130 lb over 17 years) and The Smith's Arms, the smallest pub in the world measuring ten feet wide and four feet high at the eaves. Blimey. Other than that, the only other illustrations are ink drawings of things such as a blue whale, a snake and a Diplodocus (to scale of course). Wonderful stuff. Nowhere to be found are the names of Norris or Ross McWhirter. The book is merely attributed to 'The Compilers.' Hats off, gents.

Apart from its Guinness brewery origins, the aim of the book was very much to inform and educate readers about the amazing world of superlatives and stimulate discussion. It is very much in this same spirit that next week's juggernaut hits the road as we too, 56 years later, hope to create the same magic. But what we look forward to most is capturing what the Rt. Hon. the Earl of Iveagh (Chairman at the time of the Guinness Park Royal Brewery in London) wrote about in his foreword to the very first edition.

Wherever people congregate to talk, they will argue, and sometimes the joy lies in the arguing and would be lost if there were any definite answer. But more often the argument takes place on a dispute of fact, and it can be very exasperating if there is no immediate means of settling the argument. Who was the first to swim the channel? Where is England's deepest well, or Scotland's highest tree, or Ireland's oldest church? How many died in history's worst rail crash? Who gained the biggest majority in parliament? What is the highest point in our country? And so on. How much heat these innocent questions can raise! Guinness in producing this book hopes that it may assist in resolving many such disputes, and may, we hope, turn heat into light.