One week ago, I sat in front of the Supreme Court of the United States among hundred of others anxiously awaiting their decisions on marriage equality. 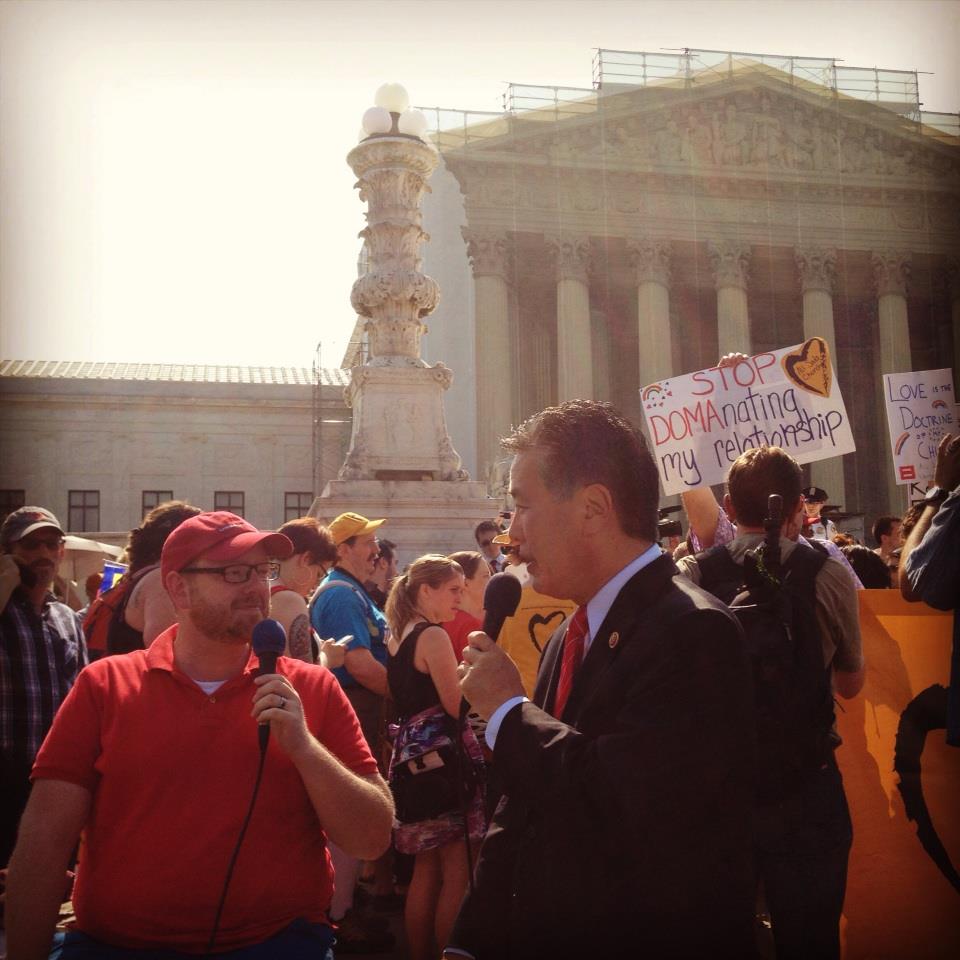 It's strange, because there in the sun, just a few hundred feet from where the decisions were being read, we actually found out quite a bit later than many of you at home reading SCOTUSblog. Phone service was sparse and in the bright, direct sunlight, I couldn't see a thing on my screen. Not to mention, I was busy hosting streaming coverage and interviews for WeActRadio. While talking with Congressman Mark Takano (D-CA), the decision striking down Section 3 of the so-called Defense of Marriage Act (DOMA) came out.

I wanted to scream and hug the Congress member, but we didn't quite have that kind of relationship yet. I continued covering the day's events and followed up with several other interviews on radio stations around the country and finished up the day on SiriusXM Radio with my husband and another friend and her wife... and a bottle of champagne. What a day!

My husband Sean and I had helped to organize rallies that happened outside the Supreme Court back in March while the DOMA and Prop 8 arguments were being heard. So much of our time was spent considering what "the other side" would be planning while we rallied. Partly we wanted to know so that we could respond courteously and effectively to the things they said. But the other reason we wanted to be prepared for them was so we could protect the families we knew would be standing with us, from the hateful, toxic things the anti-gay right seems to spew when they're angry. Our kids don't need to hear that.

Last week in front of the court was different though. Despite hate groups like the National Organization for Marriage and Family Research Council calling for "days of prayer" and for their followers to stand with them that morning on the steps of the court, no one came. I could count on one hand the number of people standing their with anti-gay signs. The rest was a sea of rainbows and love. Maybe despite their screams to the press that they would win, they knew what was coming, what was inevitable.

What followed that amazing day when my husband and I woke up without equality and went to bed with 1,100 more rights, was truly dumbfounding.

The National Organization immediately began attacking the court for making an "Illegitimate" decision. In their first email/blog post, they asked for money and linked to their fundraising page 8 TIMES. As a person who works in digital media for a living, I can tell you with some certainty that 3-4 times is excessive when asking for money in one email, but 8?!? Not even street canvassers will bother you that many times.

"There is a stench coming from this case that has now stained the Supreme Court. They've allowed corrupt politicians and judges to betray the voters, rewarding them for their betrayal. It's an illegitimate decision. We and millions of other Americans will refuse to accept this rogue decision rewarding corruption. "

Then came the emails. The angry, angry emails. NOM's emails accused California lawmakers of participating in "lawlessness" when they began issuing marriage licenses to gay and lesbian couples (which was now legal following Prop 8 being struck down). Another email was filled with vitriol and borderline racist comments about CA Attorney General Kamala Harris. In this message, they refer to Harris' "arrogance," a term usually reserved for those we think don't deserve a place in leadership. Additionally, they use the email to twist and misquote remarks made by the President about Harris a few months ago.

They followed with a tweet that said "Polygamists are actually celebrating the Supreme Court's decisions this week as a personal victory for them" and linked to a blog post which of course, said nothing of the sort.

In other posts, they continued their usual outdated theme claiming that marriage equality is bad for children somehow. Yet they continue to ignore the fact that their argument completely discounts the millions of kids being raised by LGBT parents.

NOM wrapped up the week with a patriotic 4th of July email claiming that a person cannot be gay or a supporter of equality for gay people and an American at the same time.

Graphic from NOM's most recent email

The anti-gay Right is disintegrating before our eyes and the desperation with which they are clinging onto life has never been more apparent. They will never be gone forever, though. Just as we've seen with groups that fought integration and some in the South who are still fighting the Civil War, they're never gone for good.

Happily though, with support for marriage equality in this country hitting all time highs and a Gallup poll following last week's rulings finding support at 55 percent for and 40 percent against legalizing same-sex marriages, these hate groups will continue to lose funding and support.

The fight is far from over, and as NOM is only too quick to recognize, there are still 37 states which do not recognize marriage equality. I think this number will drop quickly, but not without our work.