Until the very end of the Republican Convention in Tampa, the issue of climate change was a no-show. Even the Democrats have not made as much of this issue as many in the scientific community would like. But the issue did come up when Governor Romney gave his nomination acceptance speech. He could have made neutral comments about climate change or the environment. He could have ignored the issue completely as the Republican platform does. But in fact, Romney mocked the issue, mocked the threat to the United States and the planet, and mocked efforts to protect the environment, using the issue of sea-level rise as a laugh and applause line.

Climate change is no laughing matter. Uncontrolled, human-caused climate change is a real threat to the United States economy, hundreds of millions of Americans, and their local communities. The increasingly extreme weather of the past few years is a sign of things to come: rising temperatures, changing rainfall patterns, increasing storm and drought frequency and intensity, changing vegetation, and rapidly disappearing Arctic ice. There are plenty of remaining uncertainties -- such as the speed of the changes, their extent and severity, the costs of suffering impacts versus the costs of adapting to or preventing them -- and the scientific community continues to work hard to understand and reduce these uncertainties. But one of the most certain and devastating consequences for the United States is going to be the very climate impact that Romney chose to mock: rising seas.

Sea levels are rising for two reasons: thermal expansion and an increase in the volume of the ocean. As the planet warms, so do the oceans, and warmer water takes up more space than colder water. As ice in glaciers and the ice caps on Antarctica and Greenland melt, the volume of the oceans grows. And we already see rising sea levels. Between 1993 and the present, sea levels have been increasing an average of over 3 mm per year -- more than 50 percent faster than over the past century. Indeed, sea levels are actually rising at the upper range of model projections, and there is growing concern that scientists have conservatively underestimated the speed at which some of the massive ice volumes in Greenland may deteriorate and melt. There is so much ice on Greenland alone, that were it to melt into the oceans, sea levels would rise nearly 24 feet.

A global increase in sea level of a meter (more than three feet) by the year 2100 is now "widely accepted as a serious possibility" and even the U.S. Army Corps of Engineers recommends planning for as much as 1.5 meters (nearly five feet).

What is even clearer are the risks to our populations and economies posed by this threat. The United States has a vast and vulnerable coastline. More than half the nation's population lives in coastal counties. Nearly four million people already live within three feet of today's high-tide level, with hundreds of billions of dollars of infrastructure at risk. Residential structures in today's 100‐year floodplain of just New York City and Nassau, Suffolk, and Westchester counties already have a total estimated value of over $125 billion. New York's Sea Level Rise Task Force identified a wide range of growing threats associated with sea-level rise, including storm surges, inundation and flooding, rising water tables, salt water intrusion to groundwater, and coastal erosion.

The entire coast of the United States faces similar threats. A Pacific Institute study analyzing the vulnerability of California to sea-level rise produced a detailed assessment and maps of the threats to the California coast from the Oregon border down to Mexico. A 1.4 meter sea‐level rise would put 480,000 people at risk of a 100‐year flood event, even assuming no increase in population. Many of those at risk live in low‐income households and communities of color -- similar to the population that suffered the most from the flooding during Hurricane Katrina.

A wide range of critical infrastructure along California's coast is also at increased risk, including nearly 140 schools; 34 police and fire stations; 55 healthcare facilities; more than 330 U.S. Environmental Protection Agency regulated hazardous waste sites; 3,500 miles of roads and highways; 280 miles of railways; 30 coastal power plants, with a combined capacity of more than 10,000 megawatts; 28 wastewater treatment plants; and both the San Francisco and Oakland airports. Overall, nearly $100 billion worth of California property is at risk of flooding from a 100‐year event with a 1.4 m sea‐level rise if no adaptation actions are taken. (See the Figure below, and go here for detailed risk maps.) 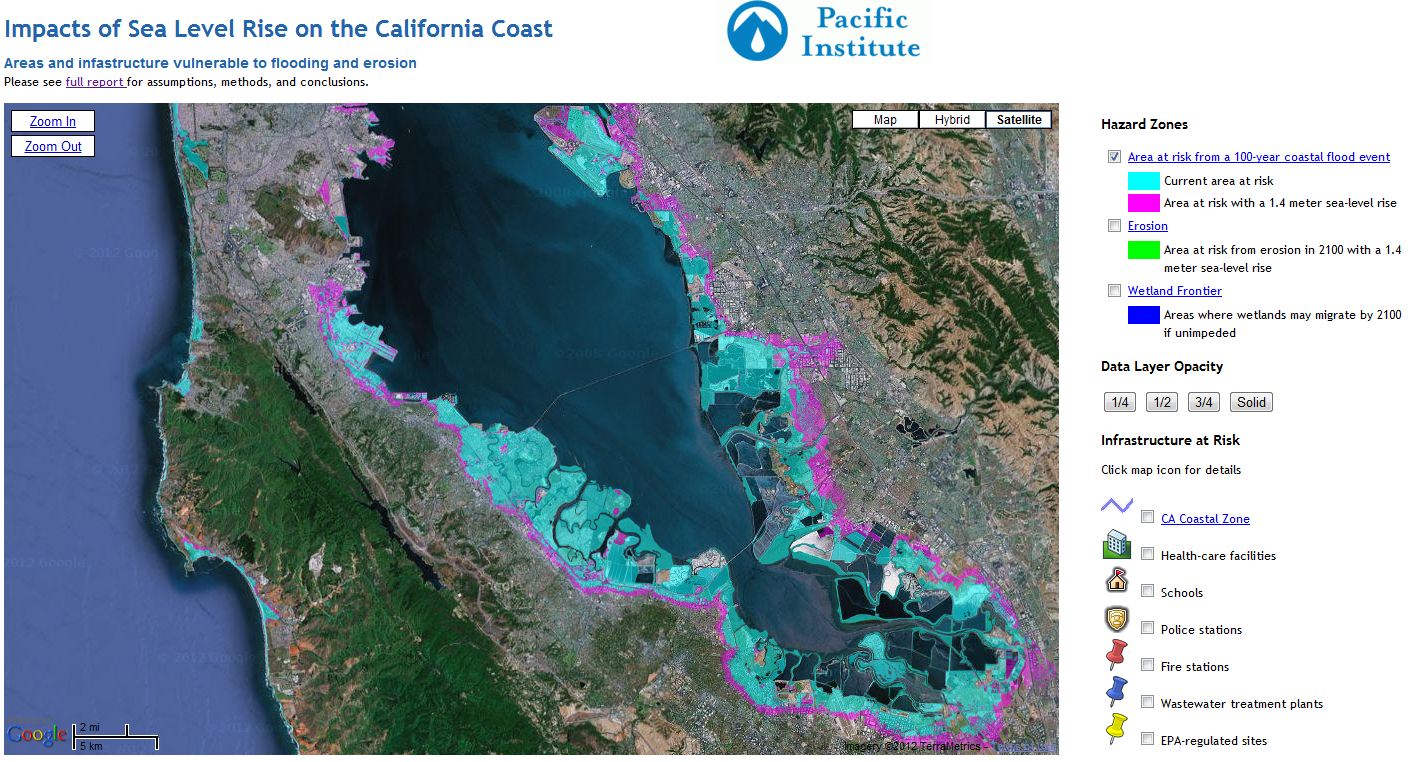 And adaptation won't be cheap. Many sea-level rise impacts will simply be unavoidable, and building coastal defenses for those things that can be protected will impose vast costs on society. Approximately 1,100 miles of new or modified coastal protection structures will be needed just along the Pacific Coast and San Francisco Bay to protect against expected increases in coastal flooding at a cost of tens of billions of dollars.

Our only climate options are mitigate, adapt, or suffer, and the only real question is what the future mix will be. The most important thing to do is slow and eventually stop human-caused climate change, and thus slow and eventually stop additional sea-level rise. But even reducing greenhouse gas emissions will not prevent significant rises from occurring in the coming years, because of the gases we've already put in the atmosphere, with a concomitant increase in both severe coastal flooding and the need for costly adaptation measures. While reducing the risks of sea-level rise will not be easy or cheap, it will be far harder and more expensive if the people we elect mock the risks we face, or even worse, fail to act.