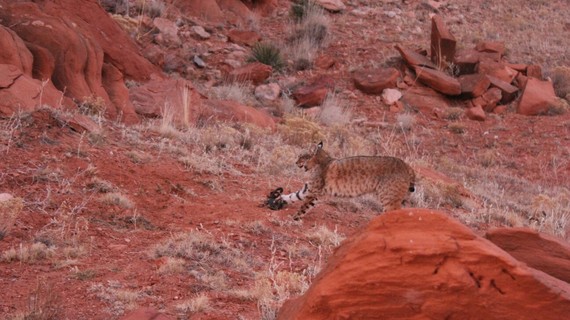 Steel-jaw leghold traps--even the name sounds vicious for these contraptions used on fur-bearing animals in the U.S Banned in approximately eighty-five countries including the European Union these ghastly apparatus are still being used today in the U.S including on the Navajo Nation. One local man, Ron Toahami Jackson is waging a campaign against these traps on the Navajo reservation after discovering two bobcats caught in traps on his land and having had to free his dog from another. I spoke with Mr. Jackson recently who said that one of the main reasons he is opposed to trapping is the pain and injury it inflicts on the animal. "I don't understand how people can do this to animals," he said, "I saw the pain the bobcat I found was going through. I was shocked. He almost pulled off his leg trying to get away."

There is no doubt that these traps cause immense suffering to the animal that is often trapped alone for hours if not days. The Navajo Nation's Department of Fish & Wildlife (NNDFW) guidelines state that the traps must be checked every forty-eight hours so an animal could easily be left in agonizing pain struggling to free his or herself for up to two days. Many animals attempt to chew off their own legs in the process. All suffer from massive swelling, broken bones, broken teeth, and dehydration not to mention the terror they must feel. The NNDFW officer that came out to Mr. Jackson's property, Dondi Begay, is listed as a "Wildlife Conservation Officer." According to Mr, Jackson, he appeared angry that Jackson had freed his dog from the trap and told him "not to mess with it." How can anyone be called a "Conservation Officer" who is engaged in using a steel-jaw leghold trap? I contacted the Director of NNDFW, Gloria Tom, to ask her about this issue but could not get a reply.

An interesting article was recently brought to my attention written by a trapper. In it, he quite categorically states he does not care if he causes suffering to the animals he traps and knows that he does. This may not come as a surprise to those of us who work against animal exploitation but it a damning indictment of the industry itself. The FBI have recently announced it will be tracking animal cruelty cases because they have proven to be "an early indicator of violent crime." I would suggest that we also include institutionalized violence towards animals including trappers. On the reservation, the NNDFW supports trapping and may even be selling permits to white hunters to trap on Navajo land but for Jackson, inflicting such deliberate cruelty is not in line with his traditional values. His Grandmother, Flora Watchman, told him that all creatures deserve respect and not to harm anything unless you are starving, and then you have to have ceremonies before you do any hunting asking for that animals forgiveness. 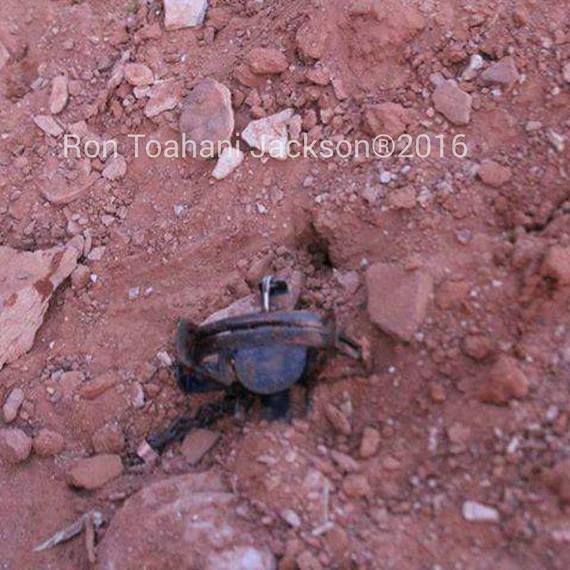 Image of a steel-jaw leghold trap found on his land courtesy of Ron Toahami Jackson.

There are multiple campaigns and petitions calling for an end to steel-jaw leg hold traps so let's end this scourge of our wildlife and companion animals. By buying fur products including clothes with fur trim you are supporting this industry of cruelty. In his campaign against trapping, Jackson urges people to report any incidents of their animals and livestock caught in traps, "If we all come together, join forces," he said, "we can get this thing outlawed."

As an alternative to the money earned off trapping, Jackson would like to see a wildlife sanctuary on the Navajo reservation and thinks it would be a good tourist attraction. It is likely that a sanctuary would bring in a lot more revenue and provide a lot more opportunities for locals than selling trapping permits. At least, this would not inflict unnecessary cruelty on any animal that just happened to be in the wrong place in trapping season whether it's a companion animal or wild animal.

For more info, please check out the following links.