"You must always remember that your career path is for you to set. It's not something that happens to you; it's not something that others draw for you. When you encounter a brick wall, rather than stand there and curse at it, make a right turn and explore some other avenues." -- Pam Luecke, Reynolds Professor of Business Journalism at Washington & Lee University, quoted in The Edge of Change: Women in the Twenty-first Century Press 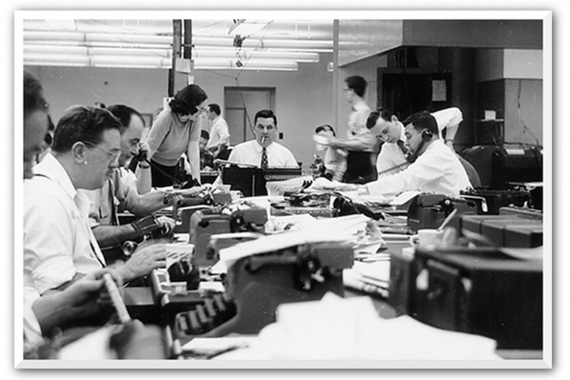 The snug lobbies with floor tiles the color of old scallop shells. The murky tanks brimming with lethargic lobsters. The clattering of dishes and the aroma of mysterious spices. These are snippets of the early memories I have from dining out in D.C. and New York Chinatowns with my family growing up. But there were also the Asian-American newspapers scattered on countertops or crammed into wire racks, an afterthought in places ruled by food. As a little one, I would often pick up these publications and study the photos or trace the Chinese characters with one of the pens my mother always kept in her purse.

As I grew older, I continued to seek out whatever print material I could find beyond library walls. While carrying a book with me wherever I went became a habit, community and metro newspapers, 'zines, and literary journals possessed a different kind of magic: Someone who had not yet catapulted to literary stardom -- to borrow my former professor Winnie Chan's phrase -- or someone who wanted to engage with the community as a public service, had produced this quarter-pound of paper in my hands.

Many of these "someones" were women, a pleasant deviation from the authors dominating my school reading lists. In scouring local mastheads as a young, impressionable writer, I took note of all the women's names. I was looking for hope in female role models. Because, unlike national publications, I saw that smaller, more localized ones populate their mastheads with female talent. These publications may still be imperfect in how they treat female employees, but they should be credited for having a higher percentage of women writers and editors than their national counterparts. They should be credited for inspiring young girls to consider a career in publishing and journalism.

My observation that women abound at local publications cannot be purely anecdotal. As a starry-eyed teenager, I got my start as a writer at community publications in the D.C. metro area, Grinnell, Iowa, and Richmond, Virginia. I always reported to female supervisors and was surrounded by female writers and editors. It wasn't until I interned at my first national publication that I found myself overwhelmingly outnumbered.

Statistics on more localized writing outlets are hard to find. "The Status of Women in the U.S. Media 2014," a report produced by the Women's Media Center, for instance, studies bylines and on-camera appearances in the top 20 TV networks, newspapers, online news sites and news wire services across the country. This year, 64 percent of those bylines unsurprisingly belonged to men. Then there's the VIDA Count. One of the main purposes of the Vida Count is to challenge major literary publications and book reviewers, from the Paris Review to The Atlantic, by tallying their gender disparity. This year's Count also confirmed -- to quote Amy King, who serves on VIDA's executive board -- that "where the money is lower, women are published more often, too." In other words, those community publications I'm talking about.

That's what's tricky. We as advocates for female writers and editors should make an effort to celebrate the publications that employ large numbers of women. Community newspapers and journals do just that. Yet those publications tend to pay less than national ones pay.

What I want, and am confident many women writers would appreciate, is a fuller picture of publishing and journalism: local, regional, national, and international, commercial and nonprofit, and pay scales for editorial assistants through publishers. That's one of the reasons I am grateful for the VIDA Count in Children's Literature. It shows another aspect of the publishing world not mentioned in the VIDA Count. The field is "friendlier" to women writers and editors, though predictably imperfect, and seeing these numbers gives us hope. What I find problematic about the Children's Literature count, as with the majority of such studies, is its focus on "prestige."

Many publishing professionals, male or female, dismiss community newspapers, magazines, and lit journals as too provincial, too rooted in the everyday or weekly minutiae of a place. They do not discuss ideas on a grander scale for a global audience. Recognition and respect matter, but so does the ability to do quality work and enact real change as writers and editors. To quote Scott Bass, editor of the Chesterfield Observer in Chesterfield, Virginia, "Great journalism comes from connecting with a community, its people, and a willingness to delve deeply into the socioeconomic issues that affect it."

Nikki Roberti Miller, a professional writer for an international relief non-profit and a 2007 Al Neuharth Free Spirit Scholar who started contributing to the Florida Today's teen section at age 13, wrote in an email:

"I think [community journalism] is widely overlooked. The community appreciates it when they or someone they know is featured in it or when they can use it to find out what's going on that weekend entertainment-wise... Some [national writers and editors] view [community newspapers] as a nuisance or something that gets in the way. Others view them as cute, not-real newspapers that are nice but not a real threat."

Sexists would add that, like the sphere of domesticity, community is a feminine concept and therefore inferior to more serious (i.e., masculine) matters. Women "settle" for positions at local publications because they can't "run with the big dogs." That's the same logic that explains why women would dominate children's literature: Children are "women's business."

How can we as women leverage the fact that we dominate community publications (whatever the actual statistics may be)? Local journalism allows for activism and the exchange of ideas as much as national publications, just in a much more concentrated fashion. Authorship shouldn't matter regardless of sex, language, location, or prestige. What matters is the writing and how that writing affects people. Of course I want more women writing for national publications "of merit." But authorship, whether local or national, grants an opportunity to enact change no matter what -- and we should take pride in our local publications and the women working for them.