For over thirteen years, multinational oil giant Royal Dutch Shell has done everything in its power to stop a trial from taking place at which the company must answer to charges that it colluded with the Nigerian military to commit serious human rights abuses to quell peaceful resistance to its operations in the Niger Delta region called Ogoni, including conspiring to bring about the conviction and execution of Ogoni leader Ken Saro-Wiwa and eight of his colleagues.

On Tuesday, there was a last-minute announcement that the trial is postponed with no new date given but it is expected to commence soon, and the plaintiffs -- Ogoni villagers and family members of people who were killed -- will finally have their day in court.

There has been a flurry of media attention as the lawyers prepare for battle in the courtroom. However, some of the most interesting events are happening behind-the-scenes in the lead up to the trial. They show that Shell continues to do everything in its power to keep the truth from coming out.On May 12, Shell's lawyers filed a motion opposing the admission of prominent human rights attorney Paul Hoffman to serve as trial counsel for the plaintiffs. [download PDF of the document]

As standard procedure for a trial of this kind, Hoffman had filed a "pro hac vice" application with the court. The Latin pro hac vice is a legal term meaning "for this occasion," and refers to the lawyer being granted permission to serve in a state where he or she may not hold a law license. In this case, California-based Hoffman was filing to represent the plaintiffs in federal court in New York.

In the motion by Shell's lawyers to oppose Hoffman as counsel, they explain how seriously they take it:

"Defendants' counsel have over 70 years of experience among us, and none of the three of us has ever had occasion to oppose a pro hac vice application."

So why was Shell opposing Hoffman's participation in the trial?

"However, here the website maintained by Mr. Hoffman's firm... contains an announcement that Mr. Hoffman will be one of the lead trial lawyers in this matter, along with a link to plaintiffs' "campaign video" that we have previously raised with the Court." [Emphasis added]

It goes on to conclude:

"posting of that link...is, in our view, inconsistent with counsel's obligations under the Canon 7 of the New York Lawyer's Code of Professional Responsibility, Ethical Consideration 7-33, and Disciplinary Rune 7-107."

In the 'Minute Entry" of the court proceedings from May 18, the court rules against Shell's motion to deny Paul Hoffman's participation in the trial: "All pro hac vice applications are granted for the purposes of this case. The Court finds that statements made by plaintiff's counsel did not violate Rule 3.6 of New York Professional Conduct."

But then it goes on to say: "However, plaintiff's counsel must remove the video from the website."

Soon after those court proceedings, the video, produced by Rikshaw Films, disappeared from the WiwavShell.org website, maintained by the Center for Constitutional Rights and EarthRights International, the two organizations which have served as the plaintiffs' main co-counsel in the case.

I don't know how often or how vigorously Shell has complained about this video, but they have. And they take it so seriously that three lawyers with "over 70 years of experience" filed their first motion against an opposing counsel's pro hac vice application over it.

So what's the big deal? Well, you be the judge. Click on the image to watch it: 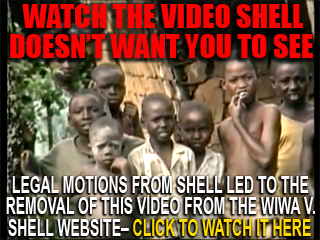 Note: I should disclose, as I did when I was on Democracy Now! recently, that I am a producer with Rikshaw Films and helped produce the video when I was working with the plaintiffs' attorneys (I no longer do).