The ladies of "The View" finally won the Daytime Emmy for Best Talk Show host, but none of them was on hand to receive it.

The chat show's co-hosts — Barbara Walters, Whoopi Goldberg, Joy Behar, Elisabeth Hasselbeck, and Sherri Shepherd — were perhaps so used to losing out to Ellen that they skipped this year's ceremony.

She then followed it up with, "OHMYGOSH we won!" "Jesus! We won!" and "The one time I decided not to go we win!"

"Just spoke w/Whoopi. She didn't know we'd won & Joy was out to dinner."

Below, a view of the empty stage after their win was announced: 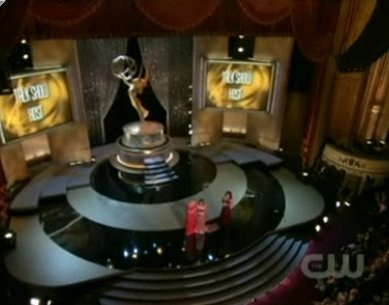