We all know that our kids listen to everything we say and often their opinions are created from a combined view of what they hear at home and what they see on television or online. Now, I really try to avoid getting into politics on social media but how can we not avoid the political scene happening in the U.S. right now. One encouraging aspect of it is that our kids are starting to pay more attention to the upcoming elections, who is in the running and even asking questions about what the difference between the candidates are.

In a recent carpool I was doing with 6 kids in the car - all girls ages 10-11 and my 7-year old son, it was fascinating to hear their views. Firstly, they started the conversation completely on their own with one kid asking, who would you vote for in the elections. These are the responses:

I would not vote for Donald Trump he is crazy.

I hate Donald Trump, what's wrong with him.

I would vote for Hillary because we should have a female president.

Well, I think she is awesome and all women should vote for her.

I was born outside of the U.S. and we're Muslim so if Donald Trump wins we would have to leave.

Really? Is that really true?

Yes - she's right - that's what I heard as well. If you are not from the U.S. and you believe in Islam you have to leave.

No one likes him, I don't understand why is he on TV all the time and who are all these people voting for him?

I still think we should all vote for Hillary, she is going to be great as a president.

I don't think she is and I will only vote for a female president when there is a good one. We should vote for Bernie Sanders instead.

Yeah, my mom is a Republican but now she has to vote for Sanders because there is no one else.

I don't know about that but I don't think our country is ready for a female president (this is from a 10-year old girl!!).

And we are back to what 10 year olds would normally talk about - friends at school, having a sleepover and what are you doing for your birthday.

Here's the thing - does this 5 minute conversation with 10-11 year old kids really sound so different from what we actually hear on the news everyday! Do you know what your kids would say? As our kids are becoming more intrigued and interested in the elections should we be talking to them about it more? Should schools be playing a part in this? Or do we keep politics at home like we are supposed to do with religion?

Why not ask your kids tonight what do they think about the elections, what have they heard, do they talk about it with their friends. Here's a tip - don't say anything just let the conversation happen between them (obviously, that's if you have more than 1 kid). Trust me, it will be a dinner conversation you will always remember. 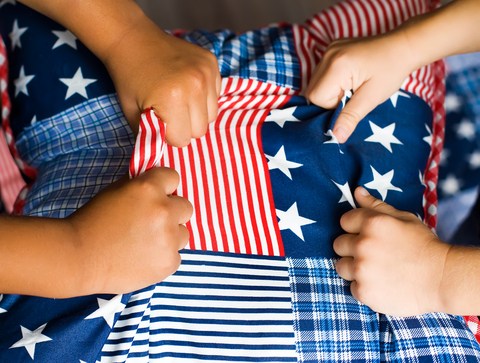 More:
DemocracyHillary ClintonElections 2016Republican PartyParenting
Newsletter Sign Up
Raise the kind of person you'd like to know
Subscribe to our parenting newsletter.
Successfully Subscribed!
Realness delivered to your inbox