Imagine having a job where you're tasked to accomplish the impossible. And you only get two chances.

For example, your assignment (should you choose it) is to build a martian spacecraft -- one that can land safely, scoop soil from the planet's surface, load it into an onboard chemistry lab to test for the existence of life. Oh, and it has to transmit data back to Earth, along with photos of the Red Planet. Put yourself back in the late '60s when technology and robotics were relatively primitive. No internet, smartphone, laptop, iPad. Data came in kB, not MB or GB. And, please, land it on July 4th, 1976, would you, because that's America's Bicentennial celebration, and how red-white-and-blue "far-out" awesome would that be!

Well, it happened - to a team of engineers, scientists and early computer specialists. No one considered it Mission Impossible, but the odds were certainly stacked against them. No detailed design, test, deployment or operational specifications existed; there were many unknown factors about the atmosphere and surface of Mars; there were worries about money to keep the program afloat. And yet they overcame all the barriers, they did everything they were tasked and more, except the July 4th part (a few days late so as not to set the robot down on a risky spot). And then, they did it again, landing a second machine a few weeks later, for backup.

Who were these incredible guys?

20th century Vikings, the best technical team that ever was. They were so good, killer precise, dead-on dedicated, they should have each gotten a Presidential Medal, or at least a vacation in Norway, home of the original Vikings.

Like the medieval Vikings, these were curious explorers and capable conquerors, but mostly they were inventors. They invented the Viking spaceship to sail and land in unknown realms. They were "imagineers" - designers of gadgets, experiments, solutions. They numbered about a thousand who gave their all to the NASA/Martin Marietta project over a decade, including scientist Carl Sagan, a public voice and unveiler of Viking. 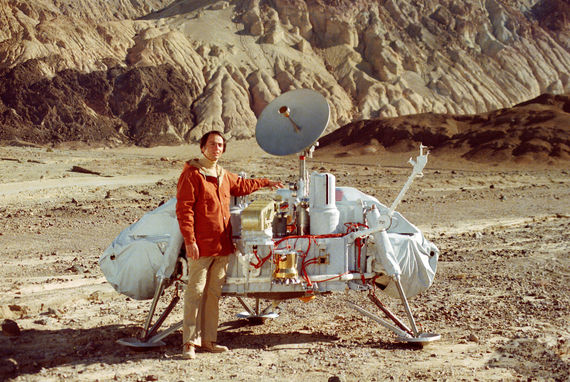 One engineer was Bob Rodamer, a Cape Canaveral (then Cape Kennedy) launch operator who pushed the button to launch the Titan/Centaur rocket that sent Viking Mars-bound. He said "At T-minus 35 seconds when I initiated the launch sequence, it got tense and exciting. It was the last manual function that made all previous efforts, by so many, a reality." Imagine the sweaty finality of pressing that button!

A hundred gathered at the 40th Viking anniversary 2016 Reunion. The 'greybeards' looked a little different than they did four decades ago. No long hair, leisure suits, bell bottoms, sideburns or cigarettes. They were plenty happy to meet up - like a fraternity homecoming - and it was mostly men. Only a few women were technologists back then.

Tears were shed as the Viking era story was revived. (Although this roomful of rocket scientists had some trouble getting the slideshow going... ha, ha.) Viking had been the pinnacle of many people's careers; their academic training, their requisite rare knowledge, their shared achievement, all distilled into one enterprise. For many, the realization only came years later, when they contemplated the profound work ethic, the daunting sacrifices - people working around the clock, family time cut short, marriages collapsing. But personal pride and lifelong friendships developed, too. If ever a technical team needed to pull together, it was the Vikings. It took everyone's heart, sweat, tears, determination, and brains to produce those stunning long-lasting results.

A special highlight was, of course, the memory of their collective thrill when the first photos came back from Mars soon after touchdown - they had succeeded! It was real! There was the footpad of the machine, actually planted on the rocky surface millions of miles away. Then when the color photos arrived, they saw no little green men running around, just a bright red hue. Maybe redder than they thought possible.

The wife of Terry Surline, a Viking aerospace engineer fresh out of college, recalled asking him: "How the heck do you know how to do this?" (See, they had been in high school trigonometry together and she'd helped him out, so she was skeptical...) Terry said: "I don't know. We just do it! We do one step, then we figure out what the next step should be."

How many steps are required to get to Mars anyway? Gazillions! And every step has to be solid, correct, and work perfectly or subsequent millions of steps could be going down a blind alley.

The practical, straight-arrow engineers didn't much like the "pot-smoking soft weirds" at first. Any green men they might discover on Mars couldn't have been more alien. Engineers wore standard white shirts and ties, short haircuts and pocket protectors. Some had steel-toed shoes. They wondered, what were those casual, irreverent data muckers doing, constantly writing mysterious code? Code that had to interface with their electronics and hardware. Then there were scientists, a third brand. The visionaries! "Anything can be done!" declared the wild-eyed scientists.

Ultimately there was mutual respect, and the confidence, that a hand-picked team could master any technical challenge the old Fourth Planet from the Sun could throw at them. "Can we make something that can do this? Damn right we can!"

Larry Perkins, who worked on the system test computer said, "No one asked, 'Is it worth it?' We all knew it would definitely be the hardest but most worthwhile thing we had ever done, and the results would definitely prove to be worth the risk, the cost and the commitment."

What's happened since? College students who worked on Viking - via an intern program - went on to be stars on future Mars programs. One lucky 14-year-old, Jim Duncan, who witnessed the landing from the Jet Propulsion Lab, was inspired to study engineering and ended up working the Mars Reconnaissance Orbiter program.

Cathy Rowe, a data specialist on the inorganic chemistry team, and one of the last to process the robot's final transmissions, was especially excited about the amazing Curiosity (large rover) landing in 2012. "I felt that all of us on Viking were pioneers and helped to make the Curiosity mission possible." Her husband, Jim Rowe, was instrumental in creating management strategies for the huge data streams. This led to the safekeeping of vital information that is still being used in current Mars programs.

The Viking findings were inconclusive about life on Mars. Sadly, the cameras revealed no little green men (or women). But Dr. Penny Boston, Director for NASA Astrobiology Institute, a 40th reunion speaker, reported that, since Viking, so much more knowledge has developed about what microbial life actually is. "What we knew about life wasn't enough then. Since the 1990s there's been an explosion of work done to show what organisms would have to be like to survive on Mars."

The Vikings of yore, when they landed on our East Coast, didn't stay long. The environment was too harsh and inhospitable. Maybe, for them, it was landing on Mars! But those explorers, too, took home lots of data about a strange, distant land, which later came in handy. What if... they hadn't come?