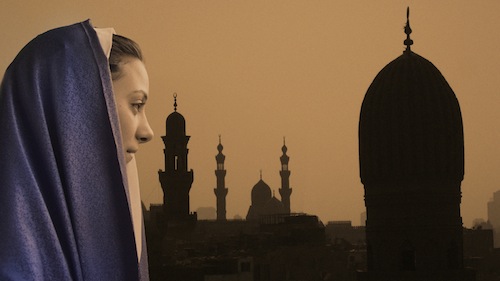 It is no secret that in the Arab world religion becomes an undeniable part of a person's identity. While most often the media concentrates on the more epidermic responses of the Muslim communities in the countries of MENA, there is little talk here in the West of the Coptic minority, a dwindling population which continues to observe the original, purest form of Christianity across the Middle East.

At this year's Tribeca Film Festival, my personal appreciation grew immensely, for both the "budding" nation of Qatar -- if one can use such a word when talking about a country with the highest per-capita income in the world -- and one of its most prominent cultural organizations, the Doha Film Institute. An educational and artistic entity -- founded by H.E. Sheikha Al Mayassa bint Hamad bin Khalifa Al-Thani -- within a country where the entire indigenous population is Muslim, the DFI helped to finance Namir Abdel Messeeh's The Virgin, the Copts and Me, a touching feature walking the line between fiction and documentary, about the complicated dogmas of faith and belief.

While I sat watching Messeeh's film for a second time, inside the SVA theater in NYC and surrounded by an audience which palpably welcomed its themes, humor and charmingly personal POV, I could not stop thinking I was witnessing history in the making.

It hit me, that this cinematic organization from a tolerant yet conservative Islamic country was opening up the discourse on the nearly untouchable subject of religion in the region. Groundbreaking! Ever the woman who tries to find ways how cinema can transform this chaotic world of ours, I could not hold back tears.

The Virgin, the Copts and Me is undoubtedly a labor of love, from all sides involved. Messeeh, born in France of Egyptian parents, disclosed that "DFI arrived at a moment when I was underneath the earth" and continued "we had finished shooting, I had problems with the producer because we had run out of money and he didn't believe in the film." Then Doha Tribeca Film Festival programmers Hania Mroué and Chadi Zeneddine watched a rough cut and insisted that the film be in the 2011 edition of the festival. "That's how I got a post-production grant, left my producer, created a company and finished the film without him."

But the film, mostly shot in 2010, is also a testament to a time past in Egypt, and Messeeh admitted, "it would not be the same film today" after the revolution, even if "the revolution has not changed very much in upper Egypt, in the villages, where lives are still the same and they are more concerned with problems like eating, working... " The filmmaker was asked by his first producer to add in some references to Tahrir Square and those infamous 18 days, but thankfully Messeeh resisted, keeping the film about his own journey home, the intimate relationships within his extended Coptic family and his personal struggles between skepticism and belief.

His reasons for resisting are perhaps a great insight into his humble genius "I didn't want to include the revolution, because I still personally don't understand what is happening in Egypt today." 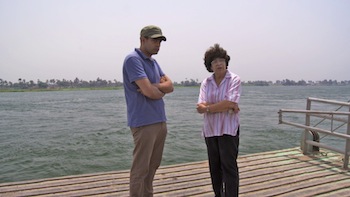 Apart from keeping true to the artistic integrity of his project, the chasm between Messeeh and his producer led to a wonderful development in the story of the film. The filmmaker's own mother turned into the film's producer, accountant and public relations specialist, helping to diplomatically negotiate the fragile boundaries that surround any discussion about religion, within their own family and the Middle East. And for the audience, she brings insight into what a proud, strong and modern Arab woman truly is, an image so far removed from the stereotype misrepresented in the West. As Messeeh answered, when asked whether he knew he was making such an important statement: "Well, women are the ones who have the power in Arab countries."

When I questioned how his own faith has changed, from the beginning of his quest to make The Virgin, the Copts and Me, Messeeh responded "to be honest, in the beginning I was a little skeptical of the apparitions, because when you are raised in a Christian family, even if you don't believe there is still something that makes you care deep inside." Once shooting started, he continued "I turned very skeptical, because I really wanted to discover that these apparitions were real, but I felt disappointed and deceived because of all the information I received and started to get confirmation that it was more like a social phenomenon."

The apparitions Messeeh refers to are at the center of the story of his film. The first one recorded was seen on the roof of the Church of Our Lady of Zeitoun in Cairo, in 1968 just after Egypt's defeat in the Six-Day War -- which led many to speculate it was a state ploy to lift the population's spirit. The second were a series of mass apparitions in Assiut, upper Egypt which were later approved by the Coptic church.

To comprehend the full power of these visions, it is essential to understand how important the Virgin Mary is in the Arab world, where she is considered "the most perfect woman and the ideal mother." And, as a taxi driver tells Messeeh in the film, "Egypt is the mother of the world... Egypt is my mother" but also where Mary lived for three years, perhaps explaining her predilection for appearing there. While many Muslims will not publicly admit to having viewed the apparitions, those who do confess to having seen her talk of Mary as their own saintly matriarch, another enlightening point brought up by the film.

After the TFF screening, a young male audience member congratulated Messeeh by saying "This film is a jewel! I loved how you portrayed your family, human and without turning them into victims or exotic creatures," while panelist Andrew Lund confessed to the filmmaker "You had us at hello!" because "you went on this impossible quest to film the apparition, which of course, is what filmmaking is about, constantly impossible quests." Continuing on, Lund also pointed to the fact that "the commercial aspect of a film is important, but what is also important is the ripple effect a project will create," which is what I personally found so groundbreaking about this film.

Ultimately, The Virgin, the Copts and Me is about what it portrays but also what it conveys. Each audience member at that screening came away with a very personal feeling. Mine was a resolve to continue to believe in the magical power of cinema.

The film will next screen in Cannes during the festival, as part of the ACID program.

Images courtesy of the Tribeca Film Festival and Image.net, used with permission.