Maricielo had a chance to study the proofs from the first photo shoot by the time the photographers returned. A pioneer in Lima's transgender community, she exuded a self-assured energy that demanded attention and respect. The artists had tried to capture that strength, to represent Maricielo as the leader and the role model she had become. The images indeed made her look confident, even formidable. But something was clearly troubling her.

Boston-based artists Andrew Mroczek and Juan Barboza-Gubo have been documenting the plight of Peru's mercurial transgender community for the past several months. As part of their ambitious project called Virgenes de la Puerta ("Virgins of the Door"), Mroczek and Barboza-Gubo are photographing several transgender women -- many of whom have never been photographed in a positive, respectful way -- in order to present them as honored role models, examples of leadership in the country's burgeoning transgender pride movement. "We want to show the trans community that there are these amazing pillars who represent their interests," Mroczek explains, "and that there are those who are willing to sacrifice their own personal safety in order to gain the visibility needed to promote change."

In a country where homosexuality and transgenderism are widely considered to be illnesses, transgender Peruvians live almost entirely in the shadows, forced to the fringes of society by a staunchly Catholic nation that severely marginalizes its LGBT citizens. A 2013 report by the U.S. Department of State showed "widespread, culturally sanctioned" intolerance that is "largely underreported for fear of violence or additional discrimination." Despite the fact that nearly 250 gay, bi or trans Peruvians were murdered between 2006 and 2010, hate crime and anti-discrimination measures have repeatedly been blocked by Peru's deeply conservative congress.

The title of Mroczek and Barboza-Gubo's project draws upon a specific cultural reference that is instantly recognizable to all Peruvians. In 1664, the walled city of Otuzco in northern Peru was besieged by pirates that had already devastated several neighboring communities. Fearing annihilation, the residents of Otuzco placed an image of the Virgin Mary on the door of the city's main gate for protection. The pirates bypassed Otuzco entirely, as the story goes, and the city was saved. Dubbed the miracle of Virgin de la Puerta, the occasion has been celebrated in Peru every December 15th for the past 350 years. It's not just a story of devotion. It's a story of adornment, of the value of a visible demonstration of faith.

Maricielo was an obvious choice for the Virgenes de la Puerta project, and she enthusiastically agreed to participate. She was a balance of strength and elegance, well known and liked within the transgender community. Mroczek and Barboza-Gubo initially tried to craft a portrait of "strong Maricielo" to reflect her status as a leader in the community, but when Maricielo examined the first round of images, she didn't see "strong Maricielo," she saw "masculine Maricielo." She wasn't unhappy with the photos -- she just wanted to look more feminine. It's a desire that speaks to the way that gender is perceived in any society: Maricielo identifies as female, and she wanted the photos to reflect that. 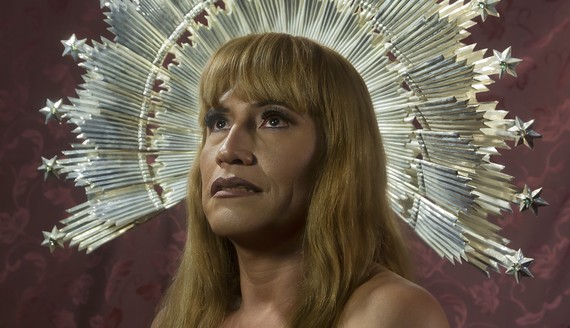 Or perhaps there was a greater issue at play. The experience of being trans can be so traumatic that those who embark upon a physical transition often turn their backs on their painful past. As a result, Maricielo might have been concerned that by looking too "masculine," she would alienate members of her own community.

For example, the artists interviewed one trans woman who had undergone breast augmentation surgery. Following the procedure, she severed all ties to the transgender community, saying that she now considered herself to be a "full woman" who wanted no connection to her "former life." This schismatic mindset serves to further fragment the transgender population: people who begin physically transitioning to their self-identified gender are shunned both by society and by their own community, and are often left with no sense of identity at all. "As soon as they start changing, it's like they're gone," says Barboza-Gubo. "They're just... gone. Nobody wants to see them anymore."

The Peruvian government's position on transgenderism compounds the issue of sexual identity. According to the U.S. State Department report, Peruvian law "does not specifically guarantee transgender persons the right to identify with their chosen gender, including by changing their name and gender on government-issued identification." This is significant because, by law, all Peruvian citizens must carry an identification card. The card is required to obtain even the most basic public services, and must be surrendered to officials upon request. Trans men and women are forced to list their legal name and biological gender on the card, instead of the name and gender they identify with. Barboza-Gubo adds that when the gender on the card doesn't match the appearance of the cardholder, a transgender person may even be denied services.

Obtaining medical care is a particular challenge. Transgender individuals are often segregated from other patients and subjected to additional, unnecessary tests. One participant in the Virgenes project, a trans woman named Gaby, told Mroczek and Barboza-Gubo that if she's lucky enough not to be turned away from a government-run clinic, she's escorted to a different part of the facility, given an HIV test, and subjected to extensive blood work even before she's asked the reason for her visit. And when a doctor does see her, she is often given a cursory examination and then dismissed without treatment. "They don't even want to touch us," she explained. "They're disgusted by us."

That disgust, according to a 2010 report by Canada's Immigration and Refugee Board, stems from discrimination that is "rooted in cultural practices" such as traditional gender norms like machismo, as well as strong anti-LGBT sentiment from the conservative Catholic church. Faced with such deeply-ingrained societal intolerance, shunned by their families and deprived of basic education, much of Peru's transgender population has been forced into exile, living on the outskirts of larger cities or in small Amazonian jungle communities, often turning to prostitution as their only means of support.

One of the goals of Virgenes de la Puerta is to produce powerful renderings of proud community leaders like Maricielo and Gaby, to honor them in a way that has never been done before. The project goes beyond just crafting inspirational portraits, however: Mroczek and Barboza-Gubo are cleverly incorporating examples of religious and cultural iconography into their photographs, adorning all of the women with crowns, capes and other artifacts styled after those used in traditional Peruvian ceremonies. In doing so, Mroczek and Barboza-Gubo portray these women as cultural symbols of hope, much like the image of the Virgin Mary was a symbol of hope to the people of Otuzco.

"When we conceptualize these images, we're trying to link these beautiful women to the iconography of Peru," Barboza-Gubo explains. "We hope they'll start to see themselves as cultural icons, often for the first time in their lives."

"There are some amazing leaders within the transgender community who are actively promoting change," Mroczek says. "We want to honor those people, but we also want to empower all transgender Peruvians to become pillars of their community, and we're honored to be a part of that progress."

"We can't fight their battles for them," he concludes, "but we can help empower them to continue to fight for themselves."