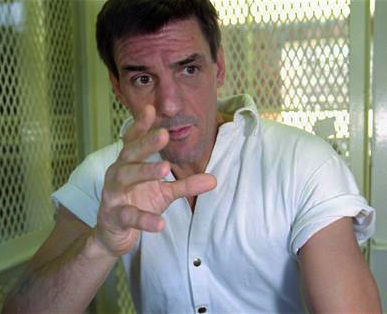 On October 30, I woke up and walked into the bedroom of our three young children. Our oldest children are twin boys. Their little bodies were contorted around stuffed animals and producing loud snores. I watched them sleep for a little while. The room was still dark. I walked further in. Our youngest was curled up in a ball. I watched him sleep for a moment. Shuffling over to a rocker, I sat for a while and let my mind wonder in the twilight.

The previous day, the State of Texas surprisingly announced that it would execute Scott Panetti on December 3. I wondered what Scott looked like when he was the age of my children. I imagined a mother watching her child sleep and dreaming about all that he child might become. I can imagine that Scott's mother never thought her child would be a paranoid schizophrenic capable of killing his in-laws in front of his estranged wife and child. The more I sat and thought, the more I couldn't help but look to my own children and wonder if they would ever commit such a crime. Who can say? I can only know what I would do if they did. I would love them.

We descend into hell when we leave love behind. The State of Texas is quickly descending into the hell of a loveless decision. Scott Panetti has suffered from documented mental illness for over 30 years. During a trial where he represented his self, Scott wore a cowboy costume and subpoenaed the pope, John F. Kennedy, and Jesus Christ to testify. In 1986, six years before Scott killed his in-laws, the Social Security Administration of our country deemed him to be so mentally disabled that he was granted monthly benefits. In order to be competent enough to be executed, Scott must understand why he is being executed. Presently, Scott thinks that he is being executed for being a preacher of the Gospel of Jesus Christ. Over the snores of my children, I couldn't imagine letting anyone take the life out of their vulnerable young bodies no matter what they did. If we don't think it is okay to execute children incapable of understanding their decisions, why would we think it okay to execute someone who is severely mentally ill and incapable of understanding their decisions? To execute either would be a cruel injustice that serves no constructive purpose in a modern world.

In his mental condition, Scott is as vulnerable as my sleeping children. How will we respond? Will we protect vulnerable life? I invite you to think about the vulnerable people that you love. Would you want the state to kill them? Texas plans to descend into a loveless hell on December 3. Somebody please save us. Oh, and by the way, the October 30 morning I spent with my children was also my birthday.