This may sound unkind, but watching millions of impassioned Walking Dead fans plunge into a collective state of Stage 4 apoplexy today has been as much fun as the show itself.

For those who haven't been following the AMC zombie tale, Season 6 ended Sunday night with someone's head getting bashed into a puddle of pulp by newly arrived bad guy Negan (Jeffrey Dean Morgan, below). 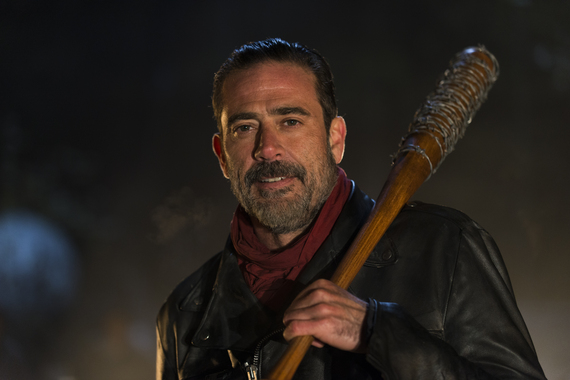 Severe head injuries are hardly uncommon on The Walking Dead, because the way you kill zombies is to stab, shoot or eliminate the cranial region.

What was different Sunday is that this head belonged to a living character that we had come to like and who we would prefer had stayed alive. 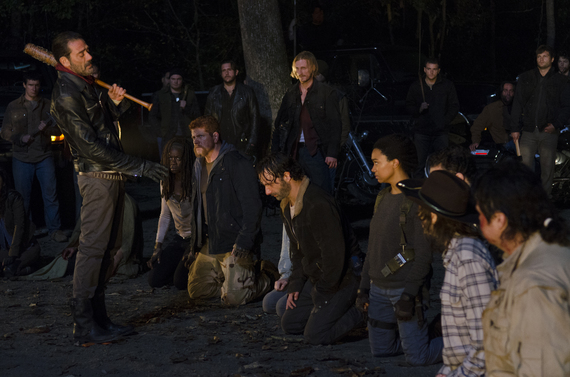 Rick, Carl, Maggie, Glenn, Daryl, Abraham, Rosita, Eugene, Sasha, Michonne and Aaron were all lined up on their knees, waiting along with millions of viewers to see which one would be selected by the strutting, sneering, evil Negan to become the aforementioned pool of mush.

In the night's final scene, however, all we saw was Negan swinging his baseball bat, the one wrapped in barbed wire and named Lucille in a touching homage to the late bluesman B.B. King, who called all his guitars Lucille. 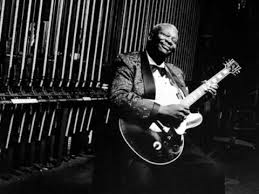 We didn't see who he was hitting, therefore we don't know who perished, and Negan had barely followed through on his final swing before the internet exploded with outrage.

"How could the producers do this, asked millions of infuriated fans. What kind of outrageous cheap gimmick are they pulling? Do we really have to wait six months to know how deeply we need to grieve?

The answer to that last one is yes. Because even though all human life is precious blah blah blah, we all know the Walking Dead universe would be way more shattered to lose Daryl than it would be to lose, say, Eugene.

But as for the more general question of "how could the producers to this to us," the answer is as clear as the appetite of a lurching zombie.

The producers did it because they knew this is exactly the way fans would react.

Fans would be outraged, they'd be furious and they'd spend every spare minute of the next six months saying so.

All the Walking Dead producers had to do was pick up the playbook employed so brilliantly by the producers of the prime-time soap Dallas back in the summer of 1980.

Dallas was a Walking Dead of its day -- a cultural phenomenon, a point of reference even among people who dismissively declared they would never watch it.

So in the third season Dallas finale, spring of 1980, someone shot the villainous J.R. Ewing (Larry Hagman). And for the next eight months, repeatedly encouraged by CBS, fans asked, "Who shot J.R.?"

It worked. It so worked. 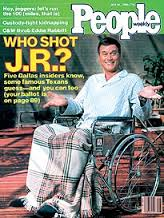 The first Season 4 episode of Dallas drew 27 million viewers, up from 19 million for the previous season. Nor were they just one-timers. For three of the next four seasons, Dallas was the No. 1 show for the whole television season.

Few shows have been able to generate that kind of hype in the last 36 years because few shows had that kind of wide-based buzz. The Walking Dead does.

Meaning it would have been dumb for the producers not to cash in.

No production team in TV history has been better at teases, hints, red herrings and general misdirection than this one.

It's an extremely safe bet that as speculation and rumors proliferate over the next few months, someone will get it right and figure out what happened. But the right answer will be surrounded by so many wrong answers that the suspense will remain.

Clues will be dropped. The show will begin filming at some point and when the actors get the scripts they will notice someone is missing. Some crew member will mutter something to someone over a drink. The producers themselves will doubtless make a few cryptic remarks.

Comparisons will be drawn to the comic book on which the TV show is sometimes based, noting that in the comic book, Negan killed Glenn.

Which, based on history, doesn't necessarily mean that's who got kissed by Lucille on TV.

It will all make fans even more apoplectic.

None of this would matter, of course, if The Walking Dead didn't continue to be a first-rate show, rock-solid in the basics of creating characters we care about and stories we want to see.

As others have noted, the longer-range cliffhanger in the Season 6 finale is how the rest of our team will get out from under the broad thumb of Negan.

And then there's the fate of another major fan fave, Carol, who was saved by Morgan after she got shot a couple of times. 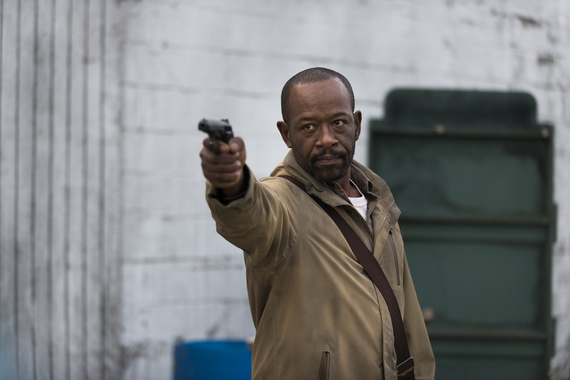 Carol seemed almost happy she was about to die, which made it ironic that to save her, Morgan had to kill someone.

Morgan, who doesn't want to kill anyone because he feels everyone can change.

Wonder whether he'll feel that way if he meets Negan.