Note: Do not read on if you have not yet seen Season 3, Episode 9 of AMC's "The Walking Dead," titled "The Suicide King."

The first half of Season 3 of "The Walking Dead" has been a far cry from the tediously slow "Where's Sophia?" arc of Season 2, but this week's midseason premiere dialed back the zombie-slaying and brought back the heavy dialogue.

We last left off with a cliffhanger: Darryl and his brother Merle about to face off in a gladiator-style battle-to-the-death at Woodbury, prompted by the now-cycloptic Governor. And that's exactly where things picked up, with the brothers being forced to fight as collared zombies and bizarrely enthusiastic spectators (can't they see the irony in being bloodthirsty?) surround them. But just when s*** is about to get real, Rick brings in back-up and throws a smoke bomb into the ring as Maggie fires a machine gun into the crowd. The commotion allows Darryl and Merle to escape, as a shocked Andrea looks on from the chaotic scene, staying behind. Right before the panic-inducing music of the show's opening interrupts, we see the Governor walking slow and steady through the smoke, seeming pretty disappointed that he didn't get his death match. 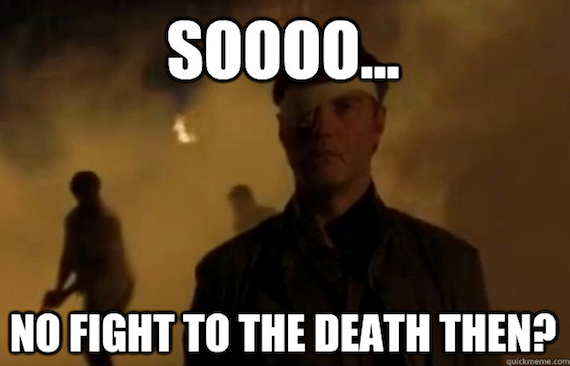 As Rick, Darryl, Maggie and Merle escape, a breach in Woodbury's fence starts to let in walkers. The four make their way down the road to where Michonne and Glenn are waiting and, needless to say, not happy to see Merle. After a brief stand-off where everyone draws a weapon on one another, Merle explains the Michonne/Andrea/Woodbury connection and everyone is finally on the same page. Now it's time for them to figure out what to do with Merle. Darryl makes the decision easy by saying he won't leave his brother again. The two of them walk off, arm-in-arm, as the rest of the gang piles into the car. Before they head off, Rick warns Michonne that as soon as she's patched up back at the prison, she's on her own.

But before they can reach the prison, an obstructed road causes Glenn to get out of the car and tell Rick how he really feels: that the rescue mission was a complete FAIL. Not only are they not bringing Darryl back, but the Governor -- who beat him up and practically raped his girlfriend -- is still at large, now madder than ever. Glenn 1, Rick 0.

Back at the prison, Warden Carl is still holding it down with his sister, "L'il Ass Kicker" and the rest of the clan, having recently taken in a new batch of survivors: Tyrese, Sasha, Adam and Ben, who also sought shelter in the prison. Hershel and Carl keep the foursome locked up in a separate cell, but we see the two groups mingling as we learn more about the newcomers. Tyrese and Sasha reveal that they survived at first by raiding the neighborhood paranoia case's end of the world bunker, then joined up with Adam and Ben in a camp that had up to 25 people before being overrun (Tyrese: "I must be the first brother to ever break INto prison!"). We also learn that Sasha has really poor conversational judgment when she asks where baby Judith's mother is. 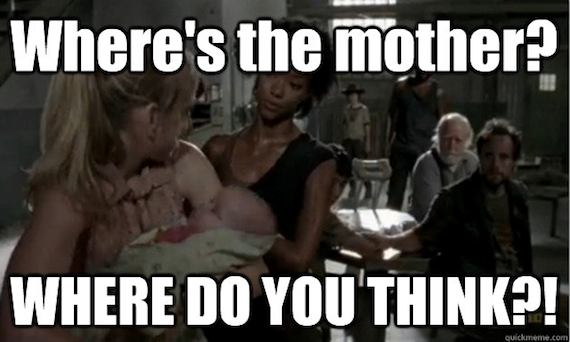 Carl's "Kiditentiary" continues, but the newcomers are later allowed to go outside to bury their departed friend. Although we get a good vibe from this new group, Adam and Ben immediately start talking about how easy it would be to kill a young kid, a teenage girl, a one-legged old man and a depressed woman and just take over the whole prison, arguing "survival of the fittest." Luckily, Tyrese and Sasha put them in their place right before Herschel's daughter Beth and Axel, the former inmate, come out acting super nice and hand them shovels. Take that, jerk face. 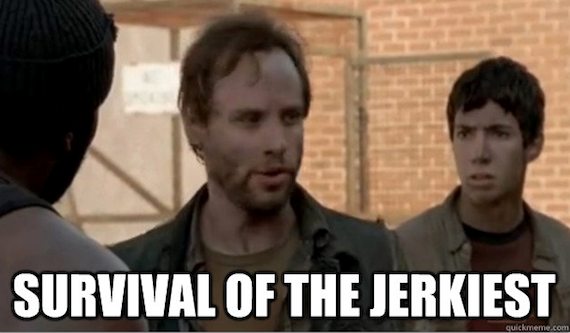 Back in Woodbury, Andrea is in full Laura Croft mode as panic sets in and citizens try to leave the compound. Zombies come in through the aforementioned fence breach and before you know it, a man is being eaten alive on the faux-town's pristine streets as a woman cries out, "Somebody do something!" This is when we see a quietly enraged Governor, no longer the charming politician we once knew -- come outside and TCOB, right in front of everyone: 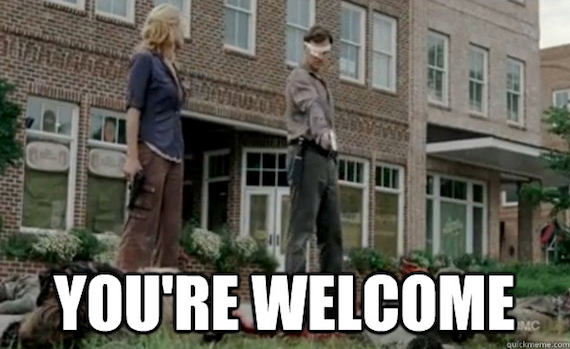 After that display of sanity, Andrea confronts the Governor, who finally reveals that he knows her friends and that they are still alive (but not for long if he has anything to do about it). Defeated, Andrea and Woodbury's resident nerd go outside to greet the town, who is now in desperate need for some leadership. Homeboy fails miserably at calming the crowd, but Andrea delivers an inspirational address like she's been writing stump speeches in her spare time. The last image we see of the Governor in this episode is of him standing in the dark, staring out the window at Andrea playing Governor in the street. It was hard to tell if he was impressed or furious, not unlike every facial expression Michonne has ever made.

When Rick, Maggie, Glenn and Michonne return to the prison, Carol and Carl are outside reminiscing about missing the sound of planes flying by, which is probably the last thing I'd care about if we was in a zombie apocalypse. Carol notices right away that Darryl isn't with them, and is obviously upset when Rick explains that she was dumped for a miraculously alive Merle. Herschel has to play both doctor and Dr. Phil to just about everyone in the prison, mending wounds and playing therapist with Maggie and Glenn. He even tells Glenn that he's like a son to him (aww!) and gives Rick an update on his baby that he never sees, saying she "eats like a horse and sleeps like a rock," which is definitely Lil' Ass Kicker's new tag line: 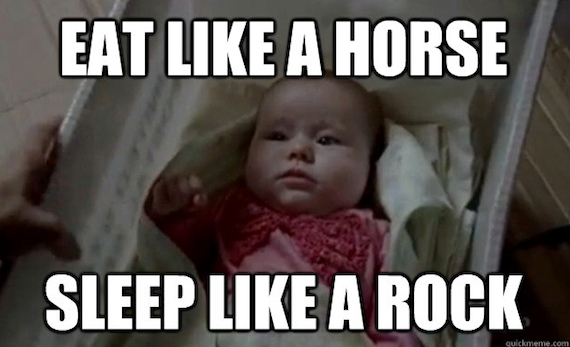 At the end of the episode, Rick finally acknowledges the existence of the "new class" and introduces himself to Tyrese and the gang. Having been burned before, he isn't exactly welcoming and doesn't shake Tyrese's hand, which would have been the biggest offense to his new roommates except that he completely freaks out after that. Just when Hershel is telling him to "give people a chance" and let them stay, Rick looks up to see THE GHOST OF LORI standing in front of a glass pane window on a balcony like she's Bonnie Tyler in the "Total Eclipse Of The Heart" video: 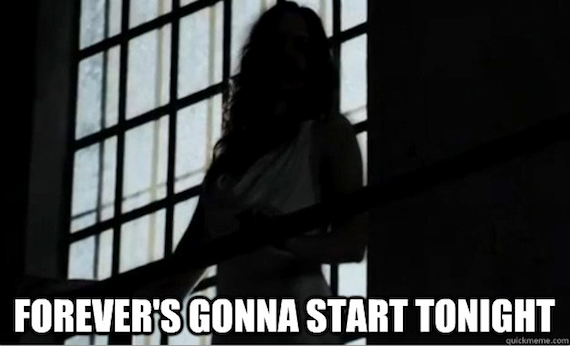 Needless to say, this sends Rick into a full-on freak-out. I wouldn't be surprised if next week's starts with Tyrese, Sasha and the Darwin twins trying to plan their escape from Rick's quickly deteriorating mind.

Was this midseason opener too slow, or an expected refresher course? Leave your thoughts and predictions for next week's episode in the comments.