Two of the prison's biggest problems were solved at the end of last week's "Internment." But, just as the flu was being quelled with antibiotics and the fence-crushing walkers were furiously gunned down, we saw a familiar face lurking at the edge of the woods.

The Governor has returned. Or, at least it looked like The Governor. The person we saw wasn't The Governor anymore, or even Philip. As we learned this week, it was Brian, a road-weary, fallen king with a brand new set of priorities.

As an episode, "Live Bait" is basically a one-man show, starting with a flashback to The Governor's field of massacred minions he left behind at the end of season 3. We finally see what he's been up to while the Prison crew has been homesteading. After Woodbury's fall, he and his last two remaining henchmen, Shumpert and Martinez, roughed it for a while until one morning The Governor woke to find himself totally alone. 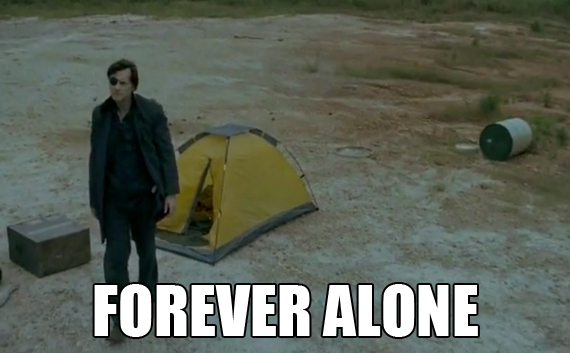 Cue the sad music as we see a montage of The Governor destroying Woodbury like an angry toddler, then hitting the road with nothing but his gun, a backpack and a scraggly beard. We hear a female voice asking him about where he came from, whether there were "monsters" there and what happened to it. As The Governor eyes a barn scrawled with the names of the dead and missing, stopping on his soon-to-be new moniker Brian, we hear him tell the female voice that "The man in charge" simply "lost it," referring to himself and Woodbury.

The Governor (for whom I guess we're supposed to feel bad, now?) barely drags himself into a nearby town and enters an apartment building with a strategically placed food truck parked outside. There he meets two sisters, Lilly and Tara. They have been living in an upstairs apartment with their lung cancer-stricken father and Lilly's cute little girl named Megan since, as Tara puts it, the "S-H-I-T hit the fan."

Suspicious of him at first, the women welcome "Brian" into their lives with a fist "pound" and a meal offering. They explain how they've been surviving off the food truck their dad drove (mmm, "Sketti Rings" for years). Tara, by far the sassier of the two sisters, says she used to be a cop and that her sister was a nurse. Despite those being two professions that are pretty much essential in the post-apocalyptic world, they actually have very little understanding of what's going on outside. For example, the whole "shooting zombies in the brain kills them" thing.

After "Brian" helps the women out by lift their father in to bed, the old man starts explaining his love for his daughters and little Megan. He begs Brian to go fetch a Backgammon set from another apartment for Megan to play with and says, "You might not understand it because you don't have a baby girl of your own." If he only knew... 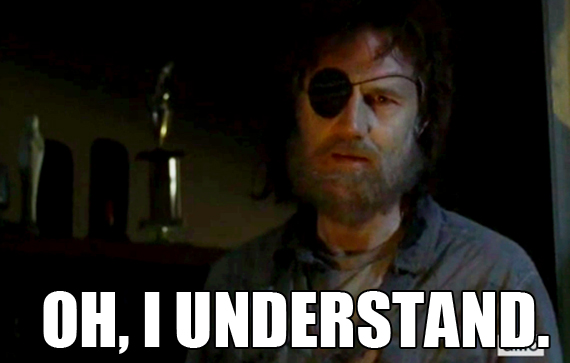 Brian goes to get the game and finds the owner, a double amputee, sitting in the tub after what looks like a botched mercy killing. Upon his return he tells Lilly that you have to shoot the "biters" in the head to kill them, to which she hilariously responds, "Why?"

Lilly, who has now seen Brian's picture of his old family, asks him to do them one more favor before he goes. She asks if he can go to the old folks' home nearby to get more oxygen tanks for her father. And, just like the father did, she phrases the question in a way that makes it about pleasing little Megan. So, Brian obliges.

Now, if you're freaked out by regular nursing homes, this might be the scariest episode of "The Walking Dead" ever. Three words: SENIOR CITIZEN ZOMBIES. 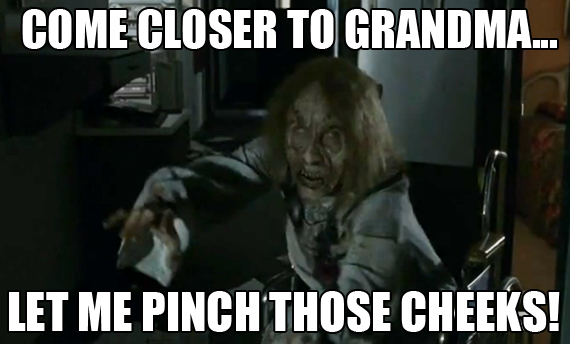 Brian tries like hell to get a couple of oxygen tanks and miraculously makes it back to the apartment without being bitten. There, Lilly gets to pretend she's still a nurse by patching him up. She also utters my favorite line of the episode:

"Nobody ever mentioned just how boring the end of the world is going to be." 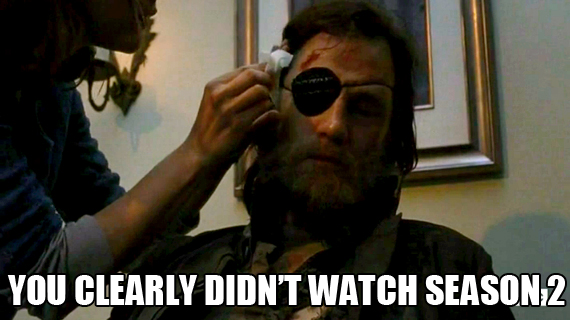 Lilly and Brian have a tender moment in the bathroom as she explains that Megan initially thought Brian was her father returning home. Then Megan comes in, acting all adorable, and asks about his eye patch. You can see the wheels turning in Brian's head. Maybe this could be his new family?

The next morning, that idea quickly starts to become reality. Brian is now clean shaven and teaching chess to the little girl. They're bonding as the apartment's current patriarch is undoubtedly dying in the next room. Right before he dies, Megan hands Brian the chessboard's King with an eye patch drawn on it. I like to think that Brian took this as permission to take over.

And take over he does! As Brian predicted, the women do not know what to do when their father turns and tries to attack them from his death bed. Luckily, he does. 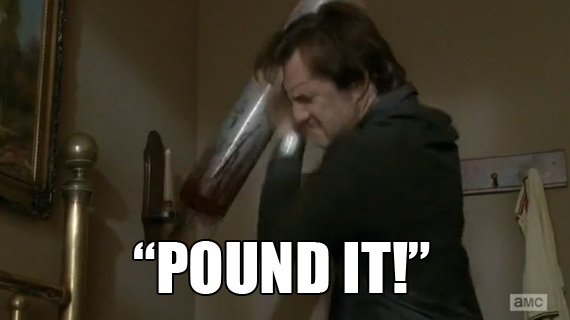 After a quick burial, the women are still sore at Brian for eliminating their father before their very eyes, but quickly get over it. That night, Brian sets fire to the photo of his former wife and daughter and packs his things. Now, he could have just disappeared into the night, but he decided to knock on Lilly and Tara's door to say "Goodbye," probably because he really didn't want to leave them. Lilly makes the decision for him by demanding that he help them find a safer place to live. "You're stuck with us," she says. Aww? 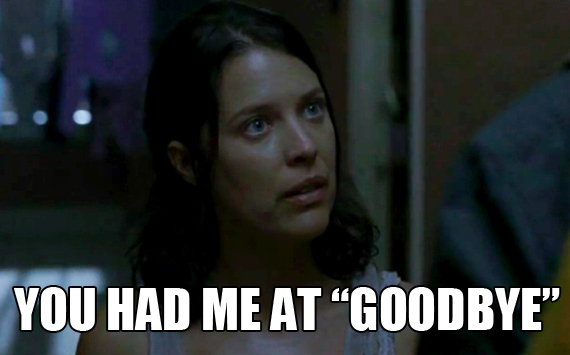 The next day, Brian and the girls pack into the Gorbelli food truck and set off in search of a new home. The next few hours are pretty banal. Tara admits she's not really a cop. They stop in a field to have a meal. Megan is being distant towards Brian. Lilly says, "It's going to take some time" for her to warm up to him. But, you know what DOESN'T take any time to happen? Brian and Lilly gettin' it on in the food truck! Weird! And, aren't her sister and daughter also sleeping in the truck? If so, gross!

Anyway, the next morning they realize that the truck has gone kaput. As they set off on foot with a rather large amount of luggage, Tara reminisces about the one that got away (also: she's into chicks) and doesn't realize her shoe is untied. She falls, hurting her ankle, just as Brian discovers a horde of biters is eyeing them for lunch.

"Come on, Megan!" They all scream at the little girl, now frozen in her tracks. Megan tries to decide what's scarier: zombies, or this guy with an eye patch who just killed her Grandpa. She chooses Brian, and runs into his arms for safety.

But wait! Brian and Megan fall into a huge pit, not unlike the ones The Governor used to have near Woodbury for corralling biters. Here, some of the most gruesome kills of the season take place, including this hilariously terrifying (hilarifying?) one, and whatever is left of Megan's innocence is completely obliterated. 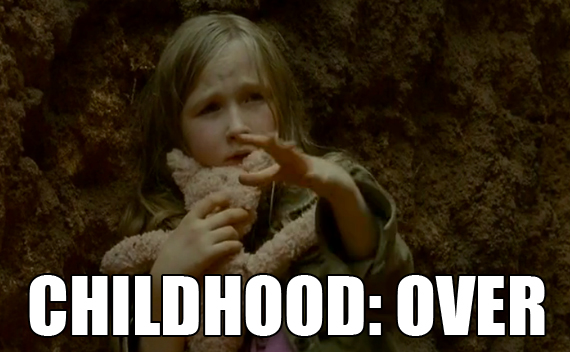 "I'll never let anything happen to you," Brian tells the little girl. And, before he can say, "Cross my heart," we hear the appropriate exclamation of "Holy sh*t!" from a man standing over the pit with a machine gun. Yep, it's Martinez! 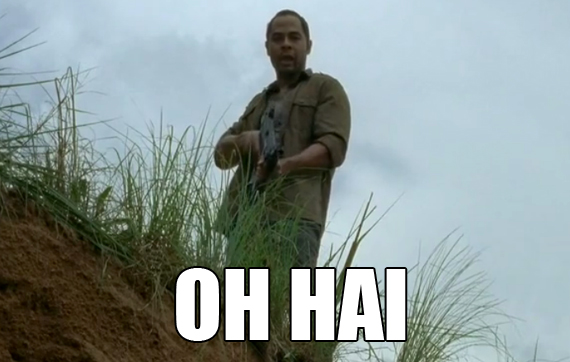 Thus concludes The Governor's --or excuse me, Brian's -- one man show. But, now that he's reunited with his old crony, what will Brian's new family think of his past? Will Martinez welcome him back with open arms, or blow up his spot and leave him for dead? Will everyone at the prison (who hasn't already died) survive the flu? And, more importantly, will Brian ever learn how to properly "pound it?"

CORRECTION: Lilly's name was incorrectly printed as "Melody" in a previous version of this blog.