Note: Do not read on if you have not yet seen Season 4, Episode 3 of AMC's "The Walking Dead," titled "Isolation."

The chaos, mass deaths and unbearable piglet massacre of last week's "Infected," are replaced with careful planning and difficult calls in "Isolation" as the prison deals with multiple crises at once.

Fresh graves are being dug as we pick up with Tyreese's gruesome discovery of Karen and David's still-smoldering bodies in the courtyard. Their murders add two more bodies to the 12 lost during the flu/Patrick outbreak and, like the viewers of this show, Tyreese wants answers.

Last week I was convinced that Rick was the one who did it and this week Tyreese's fists appeared to have the same suspicions. A fight leaves Rick with a sprained hand and Tyreese with one eye temporarily shut. That, plus his undeniable rage had him looking kind of familiar to me. 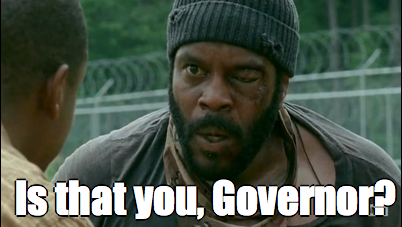 Tyreese pours his anger into burying the dead, even before seeking medical attention ("Not until they're in the ground" ::chills:: ). Later, Rick attempts to comfort him by saying whoever did it was probably trying to stop the flu from spreading (duh), but that does nothing for T's pain. While Rick is concerned about "keeping this place going," Tyreese is seeking morality over all: "You worry about that, I'll worry about what's right," he says ominously.

Inside the prison, the cell blocks have been reorganized to keep the infected people from spreading the flu. Beth is hidden away alone with baby Judith. Those with sensitive immune systems (i.e. the rest of the children and Hershel) are forced to be isolated together while Daryl and Michonne lead a 50-mile trip to a veterinary college for antibiotics.

Carl, still hopelessly stuck between childhood and adulthood, has a disturbing realization as he's gathering his things to go stay with the other kids. Packing his gun, he reminds his dad that he might have to use it on one of the kids if any of them turn. Considering that later on in the episode we find out that Lizzie -- the girl who may or may not have been feeding walkers at the fence -- has come down with flu symptoms, I'm wondering if Carl will have to take her out. Regular kid problems, amiright?

But speaking of characters with names that definitely have the flu, we soon find out that not only Lizzie but Dr. S AND Sasha are sick. Sasha is heard coughing by Glenn and Hershel on her way to the quarantine block. Ugh. Hang in there, girl. 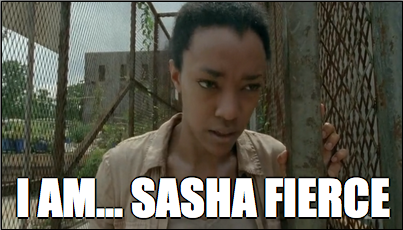 Even worse? GLENN HAS IT TOO. Now, the only hope for these (major) characters is this trip to the veterinary college over an hour away. Daryl and Michonne recruit Bob to help them find the (hopefully not already raided) drugs. Tyreese eventually leaves his self-assigned security post outside the quarantine block and decides to join them, but not before asking Carol to look after Sasha for him in case he perishes.

Now, normally I wouldn't be suspicious of scenes where someone is asking the show's honorary Godmother Carol to take care a loved one for them, but this is where it became increasingly clear that Carol is the one who "eliminated" Karen and David. 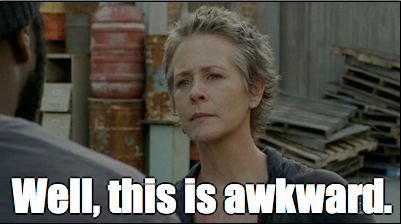 After her scene with Tyreese, Carol gets emotional, even tipping over a barrel of life-saving water that she's been working to collect for practically the entire episode. Later on, she further proves how far she is willing to go for the group by risking her life to get MORE water. "We might not get a tomorrow," she says. Well, if they do, they'll definitely be hydrated for it.

She's clearly dead serious about protecting the group, but Carol may have a competitor when it comes to toughest woman in the prison. The quiet, sweet, teenaged Beth continues to hold it together while isolated with the baby. Her emotional, older sister Maggie confides in her about Glenn being sick from the other side of her door, but Beth just reminds her that they don't get to be upset. "Everyone has a job to do," she says, echoing their father. Luckily, her job is doing this: 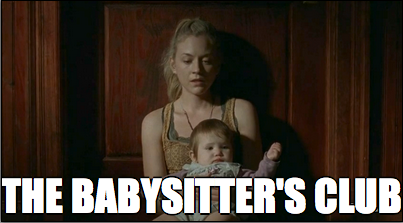 The only person who doesn't have a job to do during this outbreak and ensuing race against time is Herschel. He can't go with the group to the college because he can't run, and he's been put in isolation with the children. As the camera pans in on him in a prison office we see a painting adorned with the phrase, "Smooth seas do not make good sailors." He interprets this as: defy Carl, sneak out into the woods and collect elderberries to make tea.

Carl, now reunited with his sheriff's hat, accompanies the old man on his mission, but Maggie is not as willing to let Hershel help out. Determined to enter the infected unit with the natural remedy, he has to go into full-on monologue mode to convince Maggie that he should risk his own life to save others. 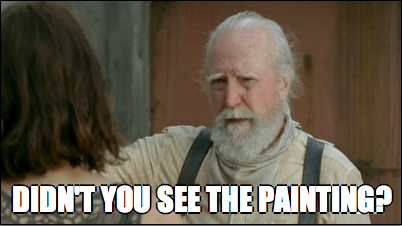 As Hershel does his best to help save Glenn and Dr. S (the latter of whom coughs blood all over his face, so... Bye-bye Hershel?) Daryl is driving his group to find medicine. They hear what sounds like a human voice on one of the radio stations, but before that can be explored any further, they hit a GIGANTIC horde of walkers. Like, impossibly large. It goes on forever!

Forced to go on foot, Daryl, Michonne and Bob are able to find a clearing in the woods, while Tyreese appears to commit suicide by walker, letting them surround his whole body as the others run. Soon enough, we see that he was able to escape and rejoin the group, but we don't see if he was bitten or not.

If Tyreese does survive the trip, he'll be pretty interested in what Rick discovers during his examination of the prison courtyard. 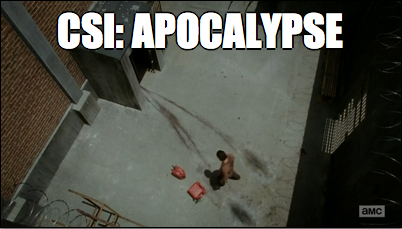 It's times like this that Rick's police training really comes in handy. He finds Carol, still collecting water, and starts to ask her gentle questions about her commitment to the group. What happens next is probably the easiest confession-seeking scene of all time. Rick asks her point blank if she killed Karen and David, and she's all, "Yes." And? 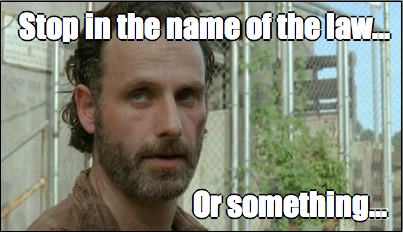 Roll credits. Would you call that an anticlimactic ending, or an appropriately callous conversation considering their daily horrors? Will there be some sort of punishment for Carol, or will Tyreese's demise put a kibosh on the entire investigation? Oh, and then there's the whole flu-that's-quickly-killing-major-characters thing going on. Will the antibiotics, and the group risking their lives for them, arrive soon enough to stop it?

So many crises, such little time.