Spoiler alert! There is no sanctuary.

Previously, our survivors made it through a major storm despite being exhausted, starving, dehydrated and mourning the losses of Beth and Tyreese. And then the suspiciously friendly Aaron showed up with promises of a new community. Can he be trusted? Or is this just going to be another Woodbury or Terminus?

By the end of Sunday night's episode, "The Distance," we get the feeling that the answer to the first question is yes -- Aaron seems like a trustworthy guy -- but until our group enters Alexandria's gates, we won't know how much of a sanctuary it really is.

Here are four main takeaways from the episode, which may have brought our group closer to salvation than they have ever been:

Rick doesn't trust anyone, but Michonne has enough faith in humanity left for the two of them.

When Maggie and Sasha bring an unarmed Aaron back to the barn and share his news of a safe camp, Rick's first instinct is to punch him in the face. Understandable, considering what the last people offering sanctuary did to them. Plus, these folks just ate a dog! Aaron's polite, L.L. Bean model looks and tales of 15-foot high walls of reinforced steel aren't enough to convince Rick that he's cool. Aaron's been following and spying on the group, which is weird, and Rick knows that he must have others hiding outside the barn. Rick wants to forget they even met Aaron because it's too "dangerous," but Michonne brings him back down to Earth. "Passing up a place where we can live -- where Judith can live -- is dangerous."

Rick obliges and stays with Aaron while Michonne, Abraham, Rosita, Glenn and Maggie go look for Aaron's cars and companion. He doesn't let Aaron get too comfortable, even when he offers up his applesauce for baby Judith. "Just because we're good people, doesn't mean we won't kill you," Rick says, promising to kill him if his crew isn't back in an hour.

Meanwhile, Michonne says she understands why Aaron is interested in their group. "People like us saved a priest ... A crazy lady with a sword. He sees that," she says. They find more good news when they locate Aaron's car and RV, filled with food like "S'ghetti Rings." When they get back, Rick wants to keep the food and send Aaron on his way, but once again Michonne makes him see the clear opportunity in front of them. "We need this," she says. "We're all going."

Aaron and the group bond over a harrowing late night drive.

Rick still has reservations as he reflects with Michonne about Terminus and Woodbury, especially the eerie silence that greeted them when they thought they had found sanctuary. Aaron refuses to tell the group where his camp is, Rick refuses to let him drive them there, take his route or even get there in daylight. What ensues is a dangerous trip, at night, through uncleared roads. We learn more about Aaron on the way, like how he's collecting state license plates to hang in his house -- his HOUSE -- and that he doesn't have any photos of his people. Michonne is disturbed by the latter and asks him the "Three Questions" just ask Rick finds his spying equipment in the glove box, the car hits a horde, they lose track of the RV and the car stalls out for good.

It's a chaotic scene, especially when a flare from Aaron's counterpart goes up in the distance. We can see that Aaron is really worried, another sign that he's an okay guy, and he further redeems himself when he helps Rick, Glenn and Michonne escape walkers in the dark woods (although, that flare gun trick that Rick pulled off was pretty effective). Glenn almost gets bitten (for the millionth time) and has a particularly poignant moment with Aaron. Confirming that he was spying on the group, Aaron says what Glenn said last week: "We can make it together, but we can only make it together."

With that in mind, the four of them finally make it to the flare location where the RV group is safe and has gotten acquainted with Aaron's (more than) friend Eric.

Aaron has the love and trust that the group is missing.

Speaking of Eric, HOW CUTE?! Aaron is concerned about his lover's broken ankle, an injury that happened while he was waiting for Aaron to finish getting kidnapped by Rick. Eric also got Aaron a license plate for his collection, not knowing that he would lose them with the car. It's been a while since we've seen affection and a strong relationship like this. Earlier, when the group found the RV, Abraham has a tender moment with Rosita when he asks if she really thought he would hit her while he had his "D.C. is a lie" meltdown, but they are still rocky.

Aaron thanks the survivors for helping him and Eric and finally reveals where they are headed: Alexandria. Rick has loosened up (Aaron is no longer tied up, after all) but he still wants to isolate Aaron while they sleep. Ever the voice of reason, Glenn convinces Rick to let his guard down. The next morning the group takes the most cheerful car ride they've ever taken: Eugene and Tara are playing cards, Aaron gives Noah hope for fixing his limp in Alexandria, and Rosita and Abraham have a sweet moment when they spy the Washington, D.C., skyline. Abe looks at the dashboard's low voltage warning and says, "We can make it." Everyone feels good! So full of hope!

... But are they really ready to re-join society?

Cut to: they're broken down. As we have already learned on this show (and in life), nothing good can last forever, and they didn't have enough juice in the battery to make it after all. But that's not what's really holding them back -- it's Rick. Michonne tells him that he has to let go, that the fight is over. Rick remembers what Bob tried to tell him back at the church about letting people in. "The rules keep changing," he says, and he's not wrong. He picks up a blender pitcher in the woods before they leave and hides a gun inside of it. After what happened at Terminus, who could blame him?

After the RV starts back up and the group pulls up to Alexandria's gates, Rick and Michonne have a moment. They can hear children playing inside the fences -- not the silence they're used to. "Are you ready?" Michonne asks him. Based on how he picks up baby Judith and smiles, it appears so. But Carol's comment at the end of the episode about Rick's skeptical approach to Aaron is a bit foreboding: "Even though you were wrong, you were right." Let's hope not.

'The Walking Dead' Season 5, Ep. 11 Recap: 'The Distance' Takes Us To Alexandria Or Bust
'Walking Dead' Out Of Costume 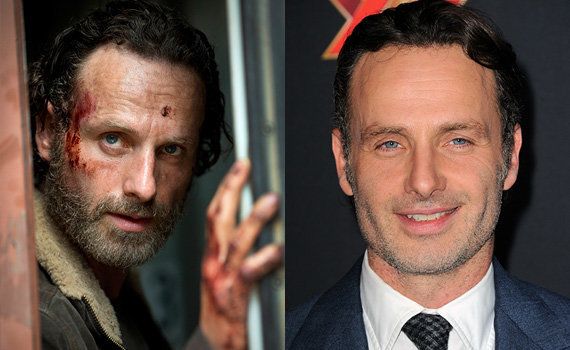