Forget the walkers, if you're happy in a relationship on "The Walking Dead," something bad is going to happen to you.

Last week's Season 5 premiere kicked things off with a bang, thanks to Carol's clever pyrotechnics, and brought our band of survivors back together. But the second episode of Season 5 proved that the problems that started at Terminus are far from over.

First, the positive. Tara, still feeling guilty about aiding The Governor's raid on the prison, has a tender fist-bumping moment with Rick, solidifying her place in the group. There was also more reconciling between Carol and Rick for what she did back at the prison and what he did to her after he found out. Tyrese assures Carol that some members of the group, like Daryl and Maggie, know about and accept that Carol took two lives to save others, but that she should come clean with the rest of the group. Daryl tries to get Carol to further open up but she just wants to forget about it. That shouldn't be too hard considering that they think they're being watched.

Oh, and the group walks off in slow motion like they're in a Wes Anderson movie. Cue The Kinks! Or better yet, Paul Simon: 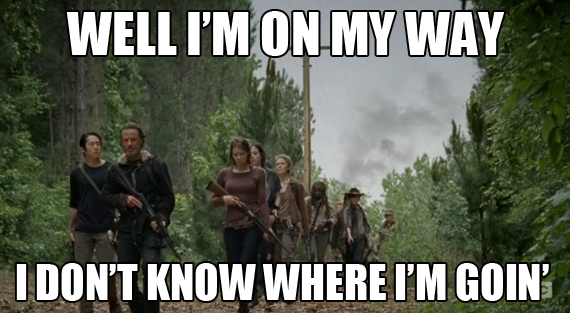 As the group walks on, we see that Michonne is no longer "The Chick With The Sword" (her Katana was left back at Terminus) but that she can still kill a walker with a machine gun without firing it. We also see that Sasha and Bob are the show's cutest new couple as they kiss openly and play an adorable game called, "The good out of the bad," where Bob counters Sasha's complaints with silver linings, ironic considering what befalls him by the episode's end.

Before long, the group makes their first big discovery: Father Gabriel Stokes, a familiar character to those who read the comics and who is somehow still wearing his priest attire, is narrowly avoiding death atop a large rock while walkers try to devour him. They save his life and he repays them by offering some comic relief, throwing up, and giving Rosita the perfect opportunity for some serious side-eye: 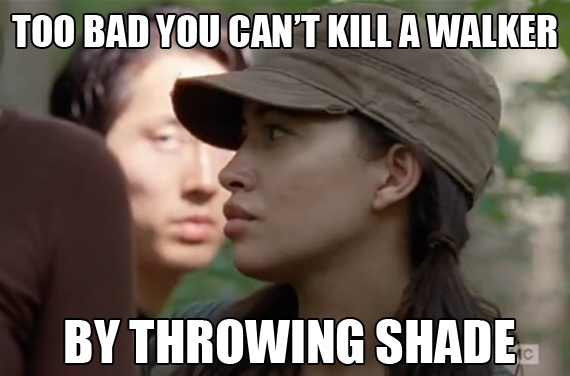 Rick asks the Father his patented "Three questions" and the group is stunned to find out that he claims to have never killed any walkers and that God is the reason he's still alive. He asks for food, compliments the baby and offers to show them the church he's been surviving in, even though he is clearly hiding something with his quip, "I confess my sins to God, not strangers."

His sense of humor is a fresh breath of air for the audience, but doesn't exactly go over well with the survivors when he jokes about leading them into a trap on the way to the church. When they get to the church, however, they see that he really has been there all this time, surviving not on communion wafers, but with tons of canned goods from a food drive at the church the day it all went down. He claims that he's also been scavenging and knows of one place that hasn't been completely ransacked.

Poor Abraham, who just wants to go to Washington D.C., asks everyone to press on. But the prospect of food, shelter and a night to regroup wins over the rest of the survivors. The only thing sadder than Abraham's pout is the realization that, yeah, they definitely should have GTFO'd. 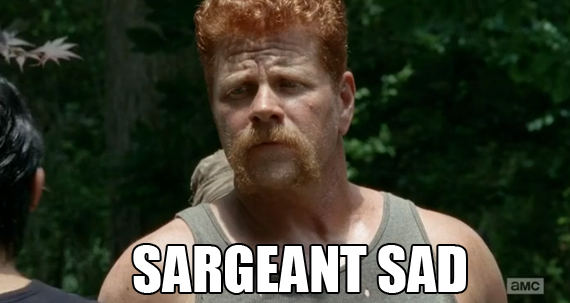 The survivors split into three scavenging groups, with Carl and Tyrese hanging back at the church to babysit. Rick brings the Father, Sasha, Bob and Michonne to check out a food bank in town, but not before sitting Carl down and giving him "The Talk." No, not the usual one you give to teenage boys. This one included phrases like, "You are not safe," "It only takes one second," and "Never let your guard down." Okay, so maybe it is the usual speech, just in a way different context.

While Daryl and Carol find and stash a working car near the church in case of an emergency (and there is always an emergency), Maggie, Tara and Glenn happen upon some silencers hidden in a mini-fridge nearby. Glenn makes a good point about scavenging, "There's nothing left in this world that isn't hidden." Also, silencers! Talk about a game changer.

But back to Rick's group, who makes the second big discovery of the episode in the food bank's basement. Rain water has eaten through the roof and floor, turning the lower room full of canned food and supplies into a lagoon of water-bloated walkers. It's preeeetty gnarly. Remember that walker they pulled out of the well back at the farm? Same thing, except these guys have been wading around for even longer.

They devise a plan to take them out, although it does involve getting in the water (gross) and several close calls. Bob comes *this close* (it seems) to being bitten by a walker before Sasha saves him and Father Gabriel is slowly confronted by a walker (who looks like a librarian) in a way that almost seems personal. Like, this lady means business: 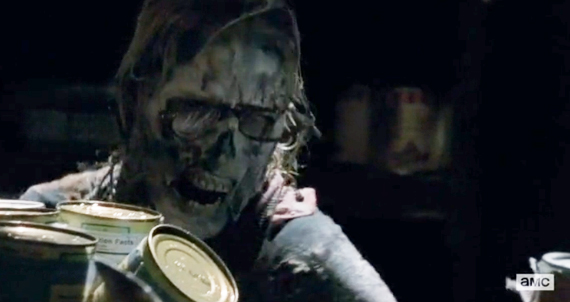 Rick saves Gabriel, Michonne kills a walker with an egg beater and the group escapes with a sh*tload of food and supplies. When they get back, Carl has made the third big discovery: a message scrawled into the side of the church that says, "You'll burn for this," with the apparent marks of someone trying and failing to get inside. They are already wary of Father Gabriel, but now we know that something went down here that wasn't, well, Kosher.

The group puts that fear aside for the night to have a big feast -- with wine, even! -- inside the comforts of the church. Rick said earlier in the episode that he wasn't sure about going to D.C., but Bob said he knew he would eventually say yes. Well, Bob was right. After a rousing speech by Sgt. Abraham about survival and Dr. Porter's promise of food, fuel and refuge in D.C., Rick says he's in. Well, technically Judith made the final call, but the point is they're going. Eventually.

The night continues as more people lay their qualms out on the table. The group has matured a lot, emotionally, since the days on the farm. Now is the time to be up front. Tara tells Maggie that she was initially part of The Governor's siege on the prison, but Maggie accepts that. Rick confronts Father Gabriel about what he's hiding and is super blunt: if he does anything to hurt his "Family," he'll kill him. And that's that.

Now, in true "Walking Dead" form, the last few minutes of the episode revealed more than the first 40. First of all, Carol thinks about going off on her own in the car she found earlier. When Daryl asks what she's up to, they see another car drive by with a white cross on it -- the same kind that kidnapped Beth -- and immediately chase after it in the stowed vehicle. This is bound to freak out the rest of the group when they realize two of their strongest fighters are missing, unaware that they're on a rescue mission or that Carol was going to take off.

Which brings us to the real horror of this episode and the third person to go missing: Bob, so blissful in his relationship with Sasha that he countered her earlier "danger at every turn" complaint with, "Never a dull moment," leaves the safety of the church for just a moment and is promptly knocked unconscious. Surprise! It's Gareth, former leader of Terminus and current cannibal with an appetite for vengeance.

When Bob wakes up, Gareth starts monologuing like a super villain. "You and your people took away our home," he says. "That's fair play. Now we're out here like everybody else trying to survive, and in order to do that, we have to hunt." Then, the big reveal: Bob's leg has been cut off to the thigh, roasted over a fire and fed to the cannibals. Gareth takes a big bite of meat, right in front of Bob, and says, "If it makes you feel any better, you taste much better than we thought you would." Ugh. Truly one of the show's most gruesome moments. 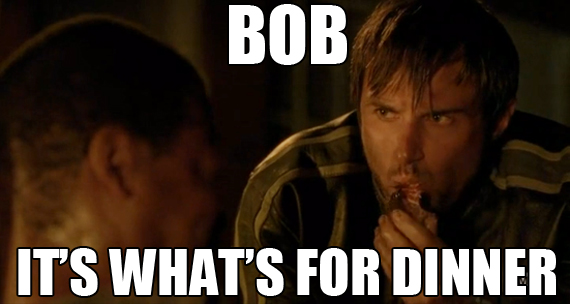 I was so distracted by the world's most horrendous BBQ that I almost missed one last important moment in the episode: a guilt-ridden Father Gabriel staring at a photo of a woman who looks an awful lot like that librarian-looking walker from the flooded food bank. It's starting to seem like his biggest sin has to do with his being a sole survivor, but it's unclear yet if he's inherently bad or if he and the "undertaker" who took Beth are connected (for us non-comics folks, anyway).

In the promo for next week's episode, titled "Four Walls And A Roof," Sasha believes there are some connections to be made and confronts Father Gabriel for herself. Even in a church -- Rick is right -- they're not safe. And this episode is probably going to haunt our dreams forever.