On Dec. 8, a French judge in the Lille Regional Court in France must decide whether or not to ban a documentary by Sophie Robert, "The Wall: Psychoanalysis Put to the Test for Autism," that highlights the treatment -- psychoanalysis -- that families are offered in France when seeking help for their child with autism.

The documentary consists of interviews of 30 French psychoanalysts (many of them lead psychiatrists at treatment centers and department heads of notable French hospitals) who place the blame for autism on mothers who are either too cold or too incestuous towards their children.

The psychoanalysts in the film quote Bruno Bettelheim (a proponent of the "refrigerator mother" theory of autism), Sigmund Freud (father of the Oedipus complex and penis envy), and Jacques Lacan when discussing the causes and treatment of autism. In the 1960s, Lacan described psychotic and autistic children as victims of the alienation of a psychogenic mother who is unable to separate from a child who is a substitute for the penis she was born without.

The 50-minute film has been available online for about two months and can be seen in the original French version, with English subtitles, or with Spanish subtitles.

Three psychoanalysts have taken legal action to ban the release of this film in which they were interviewed. The plaintiffs, Eric Laurent, Esthela Solano and Alexandre Stevens, members of the School of the Freudian Cause, contend that they were deceived about the purpose of the film. The filmmaker's attorney, M. Benoît Titran, says:

"The plaintiffs delivered information and were properly informed of the purpose of the film. But they realized afterwards the scope of their statements; therefore they don't assume them anymore and they want to be able to reconsider the authorizations they gave. If the Court accepts their request, the basis of journalistic work will be undermined."

It is not just the basis of journalistic work that is in question here; it is whether or not the public will learn the truth about the ineffective and demoralizing treatment that families with autism are subjected to when other evidence-based (and less expensive) treatments and strategies recognized and implemented everywhere else in the civilized word (except perhaps in Argentina) could be used.

Psychoanalysts have a stronghold in France for the treatment of children despite the lack of any research showing progress in their expensive psychiatric day programs paid for by government medical funds. These ineffective treatments include "Le Packing" -- derived from a 17th century treatment for mentally-ill patients in insane asylums -- where autistic children and teens are wrapped in cold, wet towels. French non-profit autism organizations such as Autistes sans Frontieres and Vaincre l'Autism among others have been battling for years to have their children educated at schools with evidence-based strategies provided by trained teachers and paraprofessionals, rather than to have to enroll their children in psychiatric day programs run by the medical system.

In 2004, a study conducted by the INSERM (The French National Institute of Health and Research) concluded that psychoanalysis therapy is far less effective than other psychotherapies including cognitive behavior therapy. However, the Minister of Health at the time, Minster Douste-Blazythe, had the results of the study removed from the official Ministry of Health website after psychoanalysts complained to him. Such is the political power that psychoanalysts wield in France.

In 2007 Didier Sicard, President of the French Comité Consultatif National d'Ethique (CCNE), a French advisory council on bioethics issues, released the findings of a working group charged with looking into the situation of the 350,000 to 600,000 individuals with autism in France.

The report stated (among other concerns) that children and their families encountered huge problems accessing early and specialized educational programs, had little if any choice in the treatment or educational modality, and that little support was provided to parents. It also stated that the Council of Europe had condemned France in 2004 for not meeting its obligations to provide children with autism an appropriate education, but that this had not resulted in any significant change in the educational care provided to these children. The report affirmed that "ethical and humane solutions are not more expensive."

Despite these findings by two different yet reputable sources, psychoanalysis continues to be the treatment offered to children with autism. Upon questioning, the psychoanalysts admit their techniques are useless. In "The Wall," when asked, "What can an autistic child reasonably expect from an analytic work in terms of results?" one psychoanalyst replies:

"Personally, if the kid does not do anything during the session, if I drowse beside him, I don't care. I am used to that in my work as a psychoanalyst."

"The pleasure of taking interest in a soap bubble. I can't answer anything else."

French press coverage of the legal action taken can be read in English here.

In my opinion, "The Wall" should not be banned. It needs to be seen by as many people as possible so that the plight of French families impacted by autism can be understood and hopefully improved. If this documentary is banned, it is the French children with autism and their families who continue to struggle to access evidence-based treatments and strategies in an educational setting who will suffer.

Watch the film while you still can. Please spread the word and leave your comments below. 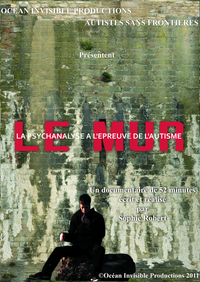