Last week, the world's most progressive minds came together in the medieval city of Lisbon for the biggest tech gathering of the year, Web Summit. I was there to see first hand how they reacted as America voted in Trump

Nearly every speaker at this year's Web Summit in Lisbon promised not to talk too much about the Trump election victory; nearly every speaker then proceeded to talk about it at length. The news hit early on day 2 and was impossible to ignore.

The tech crowd is not exactly a bastion of Trump supporters. In fact you'd probably be hard pushed to find 53,056 people less likely to vote for Donald Trump (not that all them were American, of course). Despite this, speakers tried to stay balanced in their response to the event: "The American people have voiced their opinion and we all now need to support the choice they've made" - Sean Rad, CEO of Tinder. The mood was not blaming, but rather about looking forward and thinking about tech's responsibilities to help with some of the democratic and economic issues highlighted.

Robotics and Artificial Intelligence were big topics at the conference and as one speaker after another lined up the next industry or function for automation, so some would start philosophising on what this meant for society. Sid Sijbrandij acknowledged that his developer support platform, GitLab and the tech industry in general may have had some role in creating the disenfranchised demographic that brought in Trump. He felt that his industry needed to help find solutions for the problems it caused and talked of assistance with retention and retraining.

Pretty much everyone thought driverless cars were just around the corner, as was the roll out of drones for delivery. Having talked at length about the advantages for his employees in terms of flexibility and health benefits, Deliveroo CEO William Shu didn't miss a beat when asked if his cyclists would soon be replaced by robots: "Its going to happen". The friendly taxi driver who took me back to town is campaigning hard against the arrival of Uber in Lisbon. His two young sons, whom he is anxious about supporting, are unlikely to be able to follow him into the trade on any terms. As a friend commented, "The wall won't keep out robots".

On the positive side, tech is creating opportunities for the kind of democratic empowerment that might help us navigate these changes. Former Greek Prime Minister, George Papandreou talked about his vision for the Internet being "an Agora of ideas" and how he had attempted to democratise the process of law making in Greece with something called wikilaws. Crowd-sourced law making and the 'Digital Agora' could rejuvenate direct (ancient Athenian style) democracy in the modern world, with citizens participating on a daily basis, rather than just voting at the end of every term.

Sean Rad had his own, characteristically much simpler, solution for political engagement already up and running. Yes, you guessed it: swipe right for Trump, left for Hillary. His global poll had been running for weeks and he reported some unsurprising results, with Mexican Tinderers heavily for Hillary, while Russian swipers were the most likely to be in favour of Trump (imagine that face popping up on your Tinder app!).

There was a lot of queuing to be done in Lisbon. The registration process was very labour intensive for a tech conference, and it took half of the first day to get everyone in. I spent over an hour in a queue into the old town one evening, trying to get back from the presentation on hyperloop and the future of door-to-door transportation. Finally, I nearly missed my flight home thanks to a ridiculously long queue to scan boarding passes: only one of the airport officials was young enough to scan the smartphone displayed passes. The old guys refused to touch these new fangled devices, despite only a tiny handful of travellers from the summit having paper printouts - there's a retraining task for Sid Sijbrandij right there.

I admit it was also partly my fault. In the digital future, my electronic personal assistant would have got me out of bed and off to the airport earlier, but it had been a very long 'Night Summit'. Web summiteers are a euphoric bunch, full of self-belief and optimism. They are young and in control of their (and maybe our) futures, and once the day's work was done they were very ready to have a good time. Lisbon's medieval alleys may be a pain to get around by taxi, but they create a great setting for a party. Even in November, the evenings were balmy enough for much of the socialising to happen out in the packed streets and squares.

One bright attendee I got talking to at the centre of the party - 'Pink Street' - revealed, somewhat sheepishly, that she had been running algorithms for the Trump campaign, building personas of target segments of the American electorate from an office in London. As George Papandreou had said only a few hours previously, "There is no technological development that is not political as well." 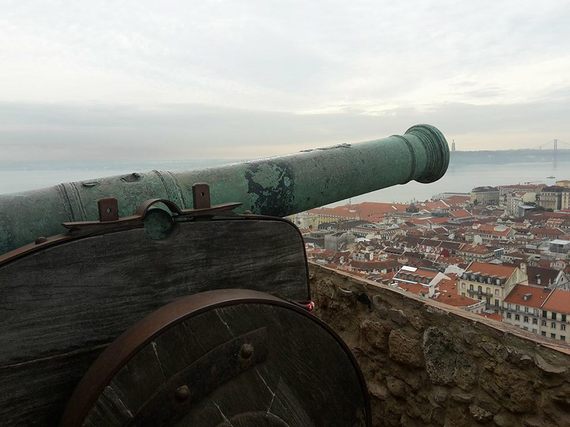