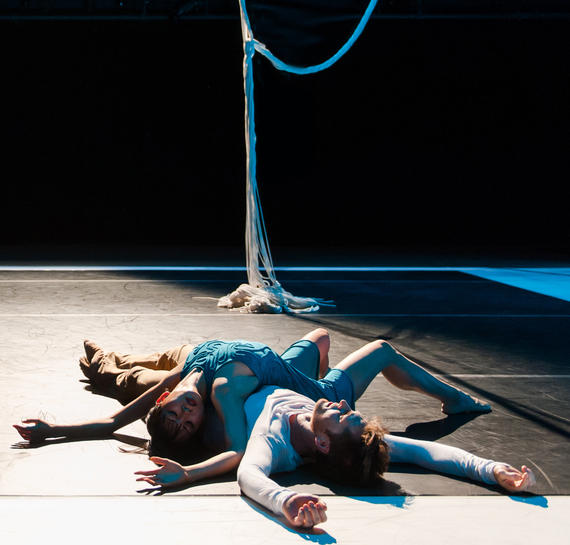 "Spring will come,
And winter will pass,
And flowers
Will grow in the grass.

And flowers will lie
On my grave,
All the flowers
That she gave me."

Humanity is ephemeral. However, we too often forget our own inconsequentiality among the chaos of the mundane, and only genius can remind us of our fleeting existence.

After the Great War, Virginia Woolf did so in To the Lighthouse, when in "Time Passes," her cast of protagonists seamlessly faded into oblivion. (They died in parentheses). But as we enter a self-interested age filled with immortality complexes and narcissism, we need a reminder that we are not gods. Thankfully, with The Wanderer, Jessica Lang Dance gently challenges our egos. The company escapes our 21st-century frenzy for individualism to capture the dominance of nature in Lang's first evening-length work.

Four characters fight for affection. Some survive, others fall. In the end, what matters is the wonder of our planet: "The sky above, how vast it is!"

Set to Franz Schubert's "Die schöne Müllerin," The Wanderer follows Wilhelm Müller's tragic lyrics about a miller who travels the region aided by his friend, the Brook, who delineates his path with her watery zigs and zags. He lusts over the Miller's Daughter, known as the Girl, who in turn finds her match in the Hunter. Lang conceived of the fairytale ballet when the Brooklyn Academy of Music's executive producer Joseph Melillo asked for a piece to fill an hour. She is a master of shorter, abstract repertoire; Lines Cubed, i.n.k., and The Calling are among the dance world's most innovative partnerships between music, props, and movement. Still, she chose to accept his test: in 60 minutes, she would turn her company into a slew of storytellers who incarnated love, loss, and the persistence of the universe.

Though The Wanderer debuted at BAM in December 2014, its two-week tenure at Jacob's Pillow this August feels special, as much of the choreography was devised during a creative residency last October at the site's Doris Duke Theatre. The ensemble is comfortable in the intimate space, and they dance with the honest vulnerability and earnestness that are Lang's trademarks. But the ballet deserves a larger, more grandiose venue -- perhaps the David H. Koch Theater at Lincoln Center? Its vision is expansive, and it merits absolute realization.

The piece relies heavily on its set. Several platforms represent the mill through a circular progression of height, and a bag with a green ribbon symbolizes the Wanderer's lute, which he abandons after he falls in love. Essential to the ambiance is a collection of suspended trees that were expertly crafted by designer Mimi Lien from the same white string used in hoodies. The Others -- four dancers in grey, who mimic the role of a Greek chorus in classical theater -- maneuver the thick tangles into distinct configurations so that the environment is ever-changing, subtle in its difference. At one point, the ropes fall in tight squiggles; at another, they encircle one of the leads to outline his captivity in grief. For the final tableau, the trees weave together to evoke a weeping willow. 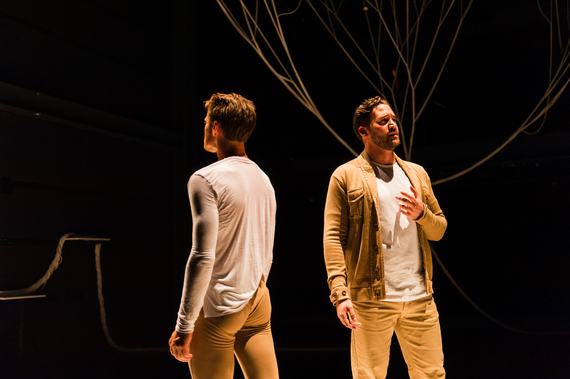 Also integral is the music. Steven LaBrie performs the libretto live, accompanied by pianist Tyson Deaton. LaBrie represents the Wanderer as an outsider watching his own demise; he benefits from the same duality of investment in the action and removal from the situation that Friedrich Nietzsche describes as the core of drama in The Birth of Tragedy. He is onstage, interacting with the dancers first on a platform and then on the floor. Thus, The Wanderer is more than a ballet -- it's a culmination of plastic art, opera, and motion where no form overpowers the other. All media interface with ease, and they improve through collaboration.

And then, of course, there are the members of Jessica Lang Dance. They're always virtuosic, harboring a maturity and commitment to their craft that few other troupes have. At the Pillow, Kirk Henning gives his farewell with JLD as the Wanderer, a part he originated. He's youthful, innocent, and gullible, and he and LaBrie have tremendous chemistry as rivaling versions of a single self. Julie Fiorenza premieres as the Girl; she seems nervous but has great potential. Nevertheless, no one competes with Kana Kimura, whose otherworldly presence governs as the Brook. Kimura excels at physicalizing a feeling. When she stands in parallel, her palms outstretched in suffering, the earth seems to bow in reverence. 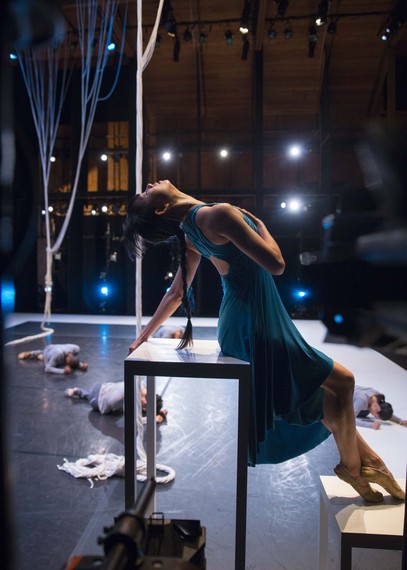 As the lights dim and eight dancers take a bow, the audience stumbles in a trance, overwhelmed by catharsis. It's soothing to reminisce on our own transience through a fragile and empathetic text. Yes, the cosmos roars onward as we slip away. Yes, we are minutiae beneath the stars in rural Massachusetts. That's all right, as long as we can find the beauty in our impermanence and revel in the landscape around us.

With The Wanderer, Lang embraces the passing of time. She gives us an hour of mystery, fantasy, and virtue. Then, it's over.

That doesn't mean it didn't matter.