The War On Poverty. The War On Hunger. The War On Discrimination. The War On Racism. We absolutely love to declare war on things here in the U.S. Maybe it's because "The non-violent police action against racism," just doesn't have the same ring to it, or maybe it's because Americans love to do everything to extremes. You only need look to sports to confirm this. We took rugby, a sport where the players tape their ears down because of the very real chance of those ears being ripped off, decided it was too docile, and created the NFL.

Eventually, even the NFL wasn't "extreme" enough for our tastes, and someone created the XFL, where even the meager safety precautions put in place by the NFL were eliminated. (Watching a 250lb man run full speed for 50 yards and tackle a stationary receiver is a Hell of a thing.) So, when anti-drug hysteria began to percolate in the last quarter of the 20th century, we hit the afterburners and took off in uniquely American fashion.

The War on Drugs. Just saying the phrase conjures up images of sizzling sunny-side up eggs, and Nancy Reagan with a group of "at-risk" youth, handing out t-shirts that say "Just say no!" The media campaign was overwhelming and complete. With D.A.R.E. programs for elementary school students, television commercials, news outlets reporting new drug-related crimes every day, and president Reagan making speeches on a regular basis about the scourge of the inner city, as a young kid, it was easy to get swept up in the totally awesome War on Drugs.

That's how it was back then -- it was either "just say no," or become a black-tar heroin dealer. That's it, no in between. Oh, and, if you made the mistake of trying to push drugs on me, then just like the kid on T.V., "I'm no chicken, but you're a turkey!" Sage words to live by, folks, right up there with "stop, drop, and roll," and "say no, then go, and tell someone you trust." It was a heady time, with a new slogan daily, and the ever-growing hordes of drug users, pushers, and addicts were mere days away from toppling society (probably). So we put our faith in a movie star turned politician to wage this War On Drugs. There's just one problem -- Reagan didn't start that particular war, he co-opted it.

You may be shocked to know that in June 1971 president Nixon, not Reagan, declared the "war on drugs" officially "engaged" (military terminology). Before that time, America thought drugs were just "kind of annoying," and always made an excuse whenever drugs wanted to have dinner.

Nixon decided that wasn't formal enough, and significantly increased the size and presence of federal drug agencies and organizations. Tricky Dick even placed marijuana on the schedule 1 list, which is the highest level of governmental control. It makes sense, Richard Nixon hated the counter-culture of the early '70s, and weed, like, helped groovy hippies to free their minds, man. In addition, Slick Nix pushed through the no-knock warrant, which allowed authorities to enter houses like they were Pepe LePew running down a helpless female. (Pepe Le Rapist?) All these anti-drug measures were the first salvo of the War, and even then they weren't universally received well. A review by a republican-led commission strongly urged the president not only to remove marijuana from the schedule 1 list, but to decriminalize it. Despite this, Nixon stood fast, but no one seemed to care. Eleven states decriminalized marijuana by 1977, and Carter was even inaugurated on a platform of legalization. Unfortunately, before The Peanut Farmer could get any of these more lenient drug laws passed, the tide shifted. Proposals to decriminalize marijuana evaporated because parents became concerned about the wide spread teenage use of "pot." So, drugs were made the enemy at the end of the 1970s, partially to help distract from Vietnam, and the minimum sentencing laws that Nixon had passed, stuck. Then came crack. 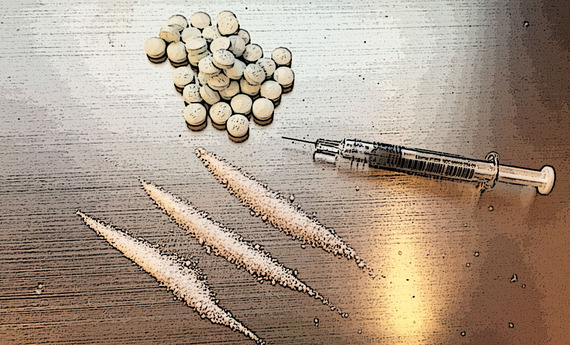 Crack exploded onto the scene in the early 1980s. Because America was so flooded with cocaine in the late 1970s, it was cheap enough to concentrate the drug into "rocks" that could be smoked. It was inexpensive, simple to make, and insanely profitable. By 1980, crack was appearing in Los Angeles, San Diego, Houston, and the Caribbean, and it spread like a disease. Enter Ronald Reagan and his wife's "Just Say No" campaign, and it set the stage for the zero-tolerance policy on narcotics that led to the escalation and growth of the government anti-drug apparatus. Just in time, too, because Americans were beginning to crave anything anti-drug like it was, well, a drug!

The 80s were a hysterical time when "crack" was "whack," and like any other craze, people couldn't get enough anti-drug propaganda. The D.A.R.E. program I mentioned earlier - it was started by L.A. Police Chief Daryl Gates, who believed that casual drug users should be "taken out and shot," and that casual drug use "is treason." Despite Gates' not-at-all extreme attitude towards drug users, schools across the nation couldn't sign up fast enough, without ever asking for proof of its efficacy or usefulness in actually prevent kids from taking drugs. It didn't matter, though - the media had parents terrified that if one pebble of crack found its way into their child's school, and it definitely probably already had, within days every student would be a drug zombie, selling the family microwave for a taste of that sweet, sweet, rock, and murdering the family in their beds to steal gold fillings. After all, Nancy Reagan said so, and she was an unimpeachable source who never consulted an astrologist.

In response to all of this anti-drug hysteria, congress and state legislatures took action that resulted in the most lasting and damaging consequence of America's farcical War on Drugs. They expanded on Nixon's minimum sentencing laws, and also added their own slew of draconian penalties for drug traffickers, sellers, users, and abusers. Not only did these laws result in ludicrous sentences for non-violent drug offenders, but in some cases the authorities could add the weight of the packaging to the criminal charge. Levon Dumont was a teenager who got 15 plus years in jail for a mere 3 grams of LSD. Why? Because of the 400 grams of paper that came with it. That's like buying new tires and paying $20,000 dollars because of the car that's wrapped around them.

Inevitably, these penalty minimums have increased the prison population from 300,000 inmates in 1980, to roughly 2 million inmates in 2013. Some data indicates that up to half of these inmates are incarcerated for drug offenses. So, now, we house one-quarter of the inmate population of the entire world. Mandatory minimums backfired, grossly, and became yet another misstep in a nonsensical war. If the War On Drugs was a person, they'd be long dead by now. Unfortunately, we've been propping up the corpse for so long that the stench is worse than the patchouli and B.O. bouillabaisse of a hippie commune in summer.

It's not all gloom and doom, though, there is some light at the end of the tunnel. A month ago, a report came out that said that our prison population was at its lowest level since 2005. In addition, just last week a bill was introduced in congress to end the era of being "tough on crime," that would give judges more discretion on lessening punishments, as well as providing a reduction of prison time for inmates who rehabilitate themselves. Most importantly though, it repeals some of the most unfair sentencing discrepancies between crack and powder cocaine. It's a bi-partisan bill, which is not surprising, as many republicans and democrats agree that mandatory minimums are irrational. Let's pray the trend continues, and if not, we can always start The War On The War On Drugs.