Last week the voters delivered their verdict on what has come to be known as "the Republican War on Women": They're against it.

We've had decades of relentless class warfare from above, in the form of wealth distribution from the many to the few. Finally, class-related issues have helped to deliver a resounding defeat to scores of candidates who represented the interests of naked greed. (See WageClassWar.org).

Women's issues and women voters were critical to this election. That's not coincidental. The War on Women has many dimensions -- social, cultural, psychological -- but in many ways women's issues are class issues. That makes the war on women a class war, among other things.

The upcoming "fiscal cliff" talks will open up another front in this seemingly endless struggle. Here are some reasons why:

1. There are much fewer women than men at the top of the pay scale.

Take a look at this graph: 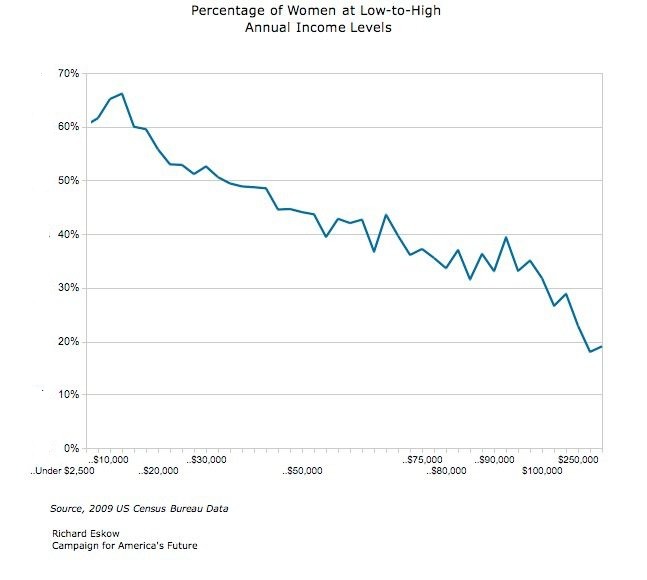 As income goes up, the percentage of women goes down.

Roughly two-thirds of Americans who make $10,000 per year or less are women.  The gender balance only reaches 50/50 status as it approaches the income levels we commonly think of as 'middle class.'  From there on up it skews heavily in favor of men.  Nearly two-thirds of the people who earn between $100,000 and $249,000 per year were male.

The disparity is even more striking for earners above $250,000: Less than one out of four Americans making $250,000 per year or more is a woman. And the key issue in this "fiscal cliff" conflict is taxation for people in this group.

The artificial fiscal-cliff "crisis" has gender implications at every income level.

how would the GOP pay for those continued tax breaks? Most of the money would come from cuts to programs for lower-income Americans. Women are more likely to be poor than men are, and single mothers are more than twice as likely to be poor as single fathers. Approximately one out of every six American women lives in poverty. 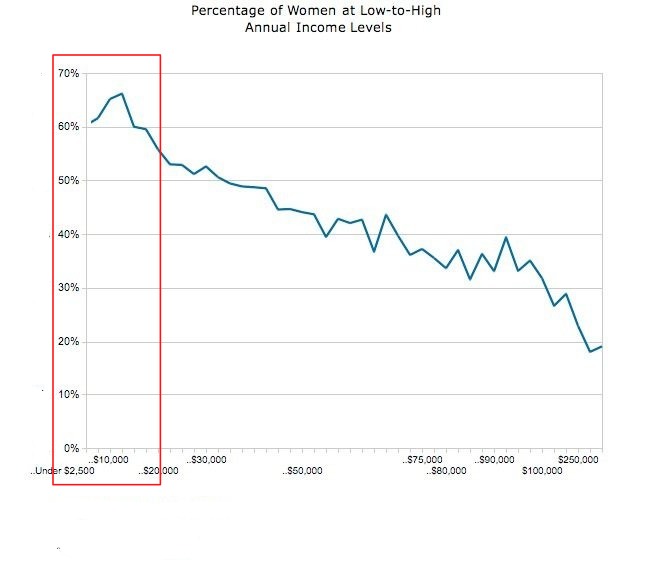 These cuts will fall on them the hardest.  As the Center for Budget and Policy Priorities observes, nearly two-thirds of the GOP's proposed cuts come from low-income programs.

A study entitled "Impact of the Global Economic Crisis and Austerity Measures on Women," conducted for Public Services International (PSI) by Jane Lethbridge of the University of Greenwich, concluded that austerity measures of the kind now being debated affect women's employment in both public and private-sector jobs.

Lethbridge notes that public-sector job cuts disproportionately affect women, an inequitable effect that's made even more unfair when wage freezes or pay cuts are imposed on women who are already making less on average. The short-term effect on women's employment is only part of the problem, since these measures also have a long-term impact on women's participation in the labor force.

The report adds that that "one feature of many austerity packages is a reduction in welfare benefits," which is "expected to have a dramatic effect on women, especially single women with children," pushing them "further into poverty." It also concludes that "many cuts in public services are reducing services such as social care, libraries, further and higher education, early years care services, sexual/reproductive health services, all of which are used by women," and that "reductions in funding for legal aid and organisations that promote women's rights are also affected, which will impact on the promotion of women's rights."

While it doesn't sit well with the mentality of American exceptionalism, many of these statements are equally true of the United States. These proposed cuts would impose a particularly heavy burden on both lower-income and middle-class women, depriving some of much-needed resources and others of much-needed jobs: 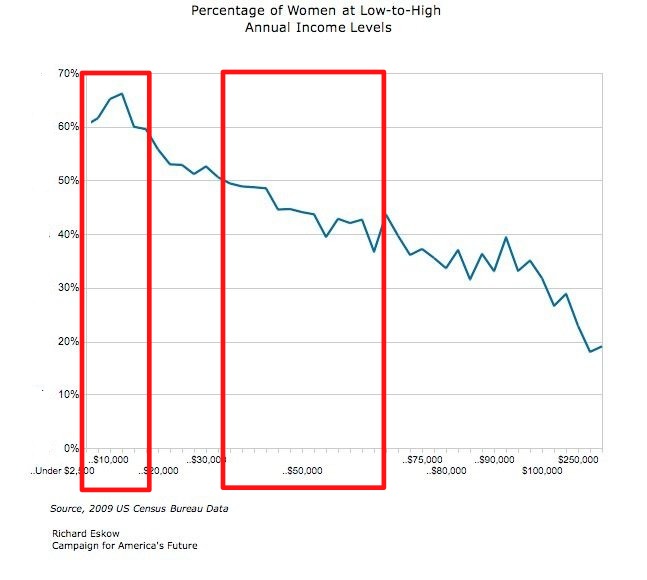 4. Cuts to Social Security and Medicare would be especially hard on women.

Women live longer than men, which makes Social Security and Medicare an even more important part of their financial security in old age. Yet John Boehner has insisted that cuts in these programs be a part of any deficit deal.  As a study by the National Women's Law Center shows, one in four elderly women depends entirely, or almost entirely, on Social Security as their means of support.

What's more, women receive less in benefits on average than men do. While the average male recipient receives $16,000 per year, which is hardly a princely sum, the average female recipient receives on $12,000. Social Security cuts would affect women who have worked and paid into Social Security throughout their working lives, as well as disabled women and those whose spouses have been killed or disabled.

Social Security lifted more than 20 million women out of poverty in 2009. Without it more than half of the nation's elderly women would live in poverty. The Law Center study shows that Social Security has also been a critical lifetime for disabled women, especially disabled women of color.  Elderly women are twice as likely to be poor as elderly men.

There's a simple, clean solution to Social Security's (relatively mild and very long-range) funding imbalances: scrap the payroll tax cap, which currently applies only to income of approximately $110,000 and less. The "War On Women" crowd is likely to oppose that, however, since that would present an slight imposition on the enormous financial resources of their base: the ultra-wealthy.

5. Those top-earner tax breaks would primarily go to men.

Here's the other side of the coin: All of these cuts are designed to protect and expand exorbitant tax breaks for the wealthiest and highest-earning Americans -- a group that's disproportionately male.

The higher up the income scale you go, the greater the benefits of these tax breaks becomes: 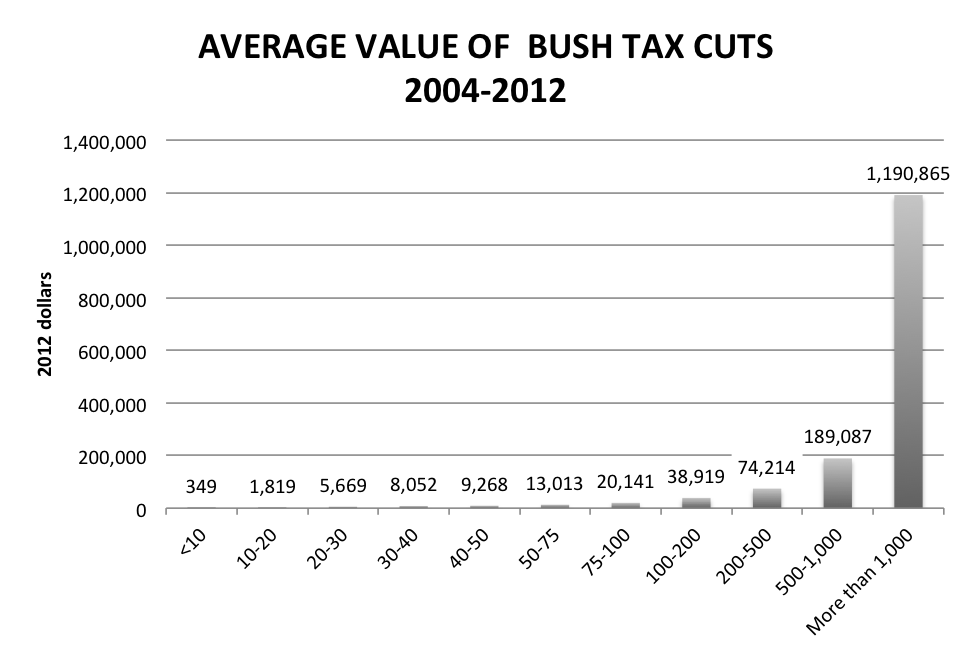 We don't have charts for the ultra-wealthy billionaire class, since the Census Bureau data isn't broken out for those who earn above $250,000. But it's safe to say that relatively few of the billionaires who benefit the most from these tax breaks -- and from others, such as the hedge-fund managers' loophole -- are women.

Which brings us to our final point:

6. A "One Percent" economy is an anti-woman economy.

All the growth in our economy -- both before and after the financial crisis and the public's bailout of the big banks -- went to the wealthiest among us: 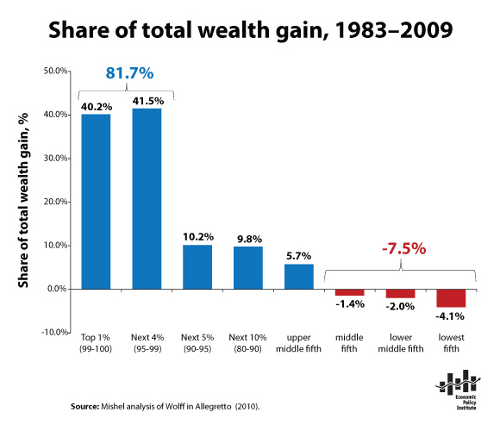 Households on the lower end of the scale actually lost ground.  That's not random or accidental. It's the result of government policies -- in areas that include taxation, education spending, job creation, public health, and even childhood nutrition.  By hurting the lower-income people among us, these policies have hurt women.

As Terry O'Neill, President of the National Organization For Women (NOW), commented: "The growing inequality of income and wealth, which has had a devastating impact on women, especially women of color, must be reversed."

Ultimately that's what discussions like this "fiscal cliff" debate are about: Whether we're going to reverse this massive upward redistribution of wealth to the already-wealthy, or whether we're going to let it accelerate. The effect on all of us -- and on women most of all -- could be dramatic.

Women were a decisive force in the last election. NOW's O'Neill also noted that "the next Congress ... will have 20 female senators ... the most in U.S. history," that there will be "a record number of women" in Congress, and that feminist male candidates won a number of key Senate races.

These leaders must understand what's a stake in the fiscal negotiations now underway.  The future of lower-income and middle-class Americans -- and the outcome of the War On Women -- depends on it.