Quite unexpectedly, I saw the most amazing view of Antarctica today, from of all places, designer John Varvatos's store on Melrose Avenue. The event was a showing of photographs by celebrity (and sometime fashion) photographer Sebastian Copeland. Mr. Copeland's photographs are breathtaking. The images take the viewer to a distant place that we normally only glimpse through documentaries from National Geographic. It has been said that a picture is worth a thousand words. This is particularly true of the photos found in Mr. Copeland's book, ANTARCTICA: The Global Warning. Picture this. A penguin sitting alone on a tiny island of ice. Barely snow capped glaciers. Whale carcasses lying on the ground.

You get the idea, and you get it very quickly by looking at these powerful images. Antarctica, is changing at a rapid rate. Through Mr. Copeland's photographs the viewer is connected with something that is very distant. Something that most of us have no awareness of. Parts of Antarctica, the coldest place on the planet, are warming at a rapid rate. Species are becoming extinct. Animals go hungry as the food sources they used to eat are dying off. The Antarctican Peninsula is warming at 5 times the Global Average, which threatens its biodiversity. 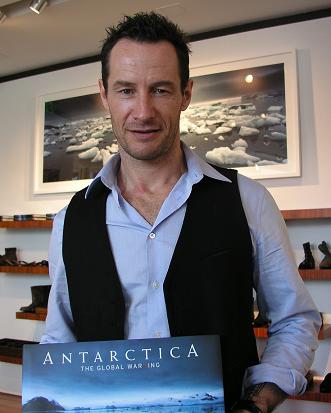 Pictured: Award-winning photographer Sebastian Copeland, poses with his book ANTARCTICA: The Global Warning. The event was sponsored by designer John Varvatos at his store on Melrose Avenue in Los Angeles. (Photo by M. Hall)

Until meeting Mr. Copeland and looking through his book, I had no idea how beautiful Antarctica is. Simply from flipping the pages, it is immediately clear that it could not have been easy to take these pictures. The journey to this remote part of the earth took endurance and stamina. He trained for months to get in physical shape for it. I asked Mr. Copeland what motivated him to make such a journey. He said, "Anyone who walks the land will gravitate to becoming a warrior in its defense." Clearly, Mr. Copeland is a warrior and dedicated environmentalist. Antarctica, once the coldest place on the planet, is warming. Some scientists estimate that by 2013, the Arctic sea ice will be all but gone in the summer months. But this is only an estimate. No one really knows, because the situation is changing at such a rapid rate. Compare the photographs from the Shackleton expedition by Frank Hurley to the photographs taken by Sebastian Copeland. There were no placid seas with floating patches of ice in the Hurley photographs from 1914. Antarctica may not remain the deep freezer of the world forever.

With all the challenges we are currently facing in the new economy, Mr. Copeland's photographs of Antarctica remind us that the state of the planet and our climate is as important as the changing course of the stock market and the unemployment rates. His book illustrates the importance of recycling, conserving energy, and taking a walk instead of driving everywhere. To really get the picture, check out Antarctica through Sebastian Copeland's eyes.