It's as predictable as a curse word in a Bob Saget comedy routine. Periodically, Oklahoma Senator Tom Coburn puts out a review of the government projects that he and his staff have designated as wasteful government spending. And each time, his list includes a number of research grants that he thinks are preposterous. Silly. Emblematic of a Washington that is severely out of touch with the American people. In these reports, science becomes a laugh line.

Earlier this year, Sen. Coburn worked to partially defund political science research; political scientists have warned that such efforts damage public debate and are a "remarkable embarrassment for the world's exemplary democracy."

Two years ago, the senator criticized experiments that put shrimp on a treadmill. If his staffers had contacted the principal researcher - as journalists eventually did -- they would have learned that the experiments measured the impact of water quality on shrimp health. Pretty important to a $10 billion industry. 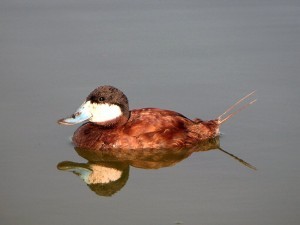 This time around, they shake their heads in consternation at federal initiatives to "count sheep," referring to U.S. Geological Survey and other agency unmanned aircraft missions that allow the government to collect information on everything from wildfires to earthquakes in previously inaccessible areas. This data can help legislators and government officials make more informed decisions.

They bristle at a study looking at using human urine as a fertilizer because...it sounds gross? Well, it certainly doesn't pass the "ick" test, but other research has shown promise in this area. Cutting down on waste treatment is certainly a valid area of research.

And who can resist making fun of research into duck penises? I spoke with evolutionary biologist Patricia Brennan at UMass Amherst, who didn't know she was on the senator's list this time around, but thinks she knows why.

"These studies sound funny because they relate to things that people can easily understand," she told me. "Similar basic research takes place in chemistry and physics, but that's more difficult to comprehend. This underscores the importance of science education. We need to teach people why basic science is important."

Brennan has previous experience with attacks on her research, so she took it in stride. But when scientists learn that they are on Senator Coburn's list, they are generally surprised and alarmed. Taken aback. Apparently, the senator's office has not bothered to contact the scientist to learn more about his or her research.

Misunderstanding the research
Yet at times, the senator underestimates the political acumen of some of his targets, with amusing results. Coburn's report accuses Yale professor Dan Kahan of measuring the "cognitive skills of Tea Party members." Kahan dryly pointed out that his NSF-funded research looked at how cognitive predispositions influence how people process information related to climate change. In other words, he's trying to figure out why people are so polarized on the issue.

"At no point in the NSF grant did we collect data or do a study on the Tea Party," Kahan told me over the phone, expressing concern that NSF would suffer embarrassment or inconvenience because of the misrepresentation of his work.

A separate, non-federally-funded blog post he wrote about a completely different set of data found no correlation between Tea Party members and science comprehension.

"It's like an Alice in Wonderland experience," he continued. "I do studies on how people can get so confused by partisanship and then those studies are what they're confused about."

Kahan's grant wasn't the only one that confused Senator Coburn's staff. LiveScience reported yesterday that they conflated studies intended to develop more weather-resilient grazing systems for beef cattle in the southern plains. "They twisted it," said Kansas State University soil microbiologist Chuck Roe, one of the project's researchers.

Lamentably, most scientists whose research is singled out likely have little formal training in media relations or advocacy. This is not, generally, part of a graduate school education. Despite all of the high-profile examples of scientist harassment, most scientists aren't used to being used as cheap political pawns.

They put in long hours running labs, publishing research, and sharing it with their peers. They also take personal time with their families and friends. The political tricks of Washington don't rise to the top of their priority list--until ideological outlets take the bait to get page views and enrage listeners. Armed with straw man arguments, they shout loudly about runaway government spending.

This, despite the fact that we spend a smaller percentage of GDP on research and development than we did forty years ago--and more and more researchers are competing for these funds. The grant application process is extremely competitive, and the few proposals that get funded are generally the most promising.

Why we should push back
When science is needlessly attacked, what are the casualties? Rational discourse. Unfettered scientific inquiry. An appreciation of how government funding of science has been, and continues to be, a significant contributor to our economy and quality of life.

"These political attacks undermine our ability to be competitive and innovative," says Brennan. "Basic science is not predictable. It is a network of knowledge that builds over time. Exploring those really weird questions in nature is how we can come up with novel ideas."

Senator Coburn is a champion of cutting federal budgets, including government waste. The message plays better and better each year, as wealth is concentrated at the top and the middle class shrinks. But hand-waving and labeling research as "waste" to get attention is misguided and distracts the public from more legitimate oversight.

That's why it's important for all scientists--no matter how non-controversial their research may be--to be prepared to engage publicly and explain the value of their research.

It's also incumbent upon research universities to give scientists the skills they need to communicate with clarity, and to incentivize public engagement. We might not be able to stop those who misrepresent science, but we can become more resilient to their attacks and effective at pushing back.

There is waste in government just as there is in the private sector. Oversight is fantastic. But showmanship is galling. As to which camp this report falls into, it's an easy call.