For years, I could not sit through the charming family movie Father of the Bride. Despite its warmth and humor, I would actually leave the room whenever it came on television. I suppose the story of a loving father who didn't want to face his daughter's impending marriage hit a little too close to home.

On May 28, 2010, my desire to run away from the thought that my little girl would someday get married came to a screeching halt when a young man named Eduardo met with my wife Juliana and me to ask our blessing to marry Persephone. And, as tempted as I was to behave like Steve Martin, I knew he was the one.

Two years of engagement and preparation flew by astonishingly fast. Here's what was going through my mind throughout the process:

While Shopping for the Gown

Everyone knows that the ladies plan the wedding, so I didn’t expect to be consulted on much beyond the budget. Yet to my delight and shock, Persephone actually asked me to accompany her dress shopping!

“I am sure when you see the right dress, you'll know it," I assured her on a beautiful Saturday in August, as we strolled through midtown Manhattan.

She looked at me with her big brown eyes, squeezed my hand and answered, "Doodle, I'll know when I’ve found the right dress, because I'll see it on your face." And sure enough, there was one particular gown that brought us both to tears that afternoon. I still couldn’t believe I was there to share the moment when she said yes to the dress.

A few weeks later, she brought me a thank-you gift. It was linen handkerchief, embroidered with these words: "Doodle, you will always be the first man I ever loved. Thank you for being there for me every step of the way. Love, Persephone."

The Morning of the Wedding

On the morning of the big day, Persephone asked Juliana and me to join her for breakfast. The serene joy in her demeanor calmed the flurry of emotions in my soul. In typical Persephone-style, she thanked us for our support and gave us each a very thoughtful gift and a card. Folded in the card was a copy of a letter she'd written for the Father's Day issue of a magazine. It was entitled "My Chief Daddy Officer," a play on the title of my book CDO Chief Daddy Officer: The Business of Fatherhood which, to a large degree, describes my raising of Persephone from the age of seven to adulthood as a single dad. Read her full letter here!

The First Moment I Saw Her in Her Wedding Gown

Before I could catch my breath, it was time. I walked into the suite to escort my little girl to the ceremony but could not see her. Her bridesmaids had formed a semicircle around her, obstructing my view of her to heighten the surprise — and that they did. When they parted, I saw the most beautiful young woman wearing a radiance and joy I had never seen before. Flooding my mind were pictures of the little girl I'd help dress in the morning, the one I drove to school, the girl that went to the prom, the one that graduated college... where did the time go? I do not remember what I said to her. I know I told her she looked beautiful, but I was trying to hold it together for both of us so that she wouldn't get teary and mess up her makeup — girls' dads know that. So, I just stood there for a short time, holding her hand and taking it all in under the loving gaze of Juliana and her bridesmaids.

I have had many profound and meaningful experiences in my life, but none of them compared to this moment.

The Walk Down the Aisle

As we walked down that aisle together, I felt like I was reliving every minute we had ever shared all at once. I had dreaded that moment for years, but now that it had arrived, it was perfect. I kissed her and gave her hand to the man who moments later became her husband. She kissed me on the cheek and then kissed my hand, the ultimate gesture of respect for someone in the Greek culture. The ceremony started, they read their vows, and I was daydreaming feeling very proud and thankful for the girl I raised to the woman she had become. I thought that it is true indeed, that respect begets respect, honor begets honor, and sowing care, consideration and purpose into others -- especially your child -- will cause you to reap the same. And I had. A tear left my right eye, Juliana squeezed my left hand, and my mom gave us both an approving look. 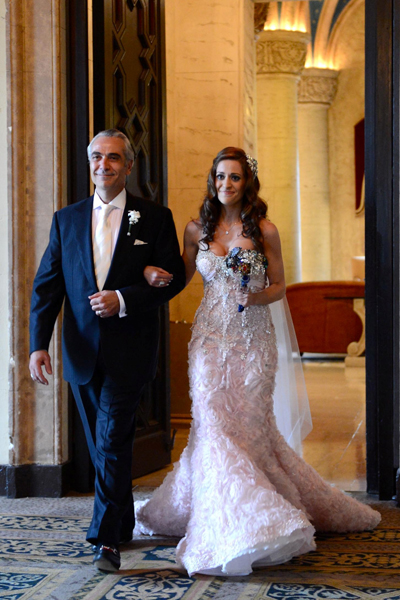 When She Was First Announced as a Mrs.

Pictures and cocktails followed, and time came to make the entrance into the reception hall where, for the first time, she'd be announced as Mrs. She called me to an anteroom to ask me how she looked. She wanted to read my face. "How do I look, Doodle?" she said. "You are an amazing person," I told her, "And I love you for it." I gave her a kiss. The photographer captured the moment.

They were soon announced to the guests as Mr. and Mrs. Maglaya. It sounded foreign and it sounded right. She is Eddie's wife. She is my daughter. It was all true, just, normal and natural. Perfect!

During the Father-Daughter Dance

Another moment we both dreaded was the father-daughter dance — too somber, too definitive, too final. So, if you don't like the beat of the drum, create one of your own. And so we did. We created a four-minute medley of Sinatra, Wonder, Richie, Usher and the Temptations. Every song meant something to us, and we were able to offload the emotion and replace it with fun. We started with "My Way," peaked with "Yeah," and finished with "My Girl."

Preparing to Make a Toast

Two days before the wedding, I spent 90 minutes writing my remarks to the new couple. Read them once. Liked them. Then I started reading them aloud. Choked. I'd choke each time I read them for the next 48 hours, till I decided that somehow I'd get through it. I figured I'd use some humor. Perhaps borrow from My Big Fat Greek Wedding. It was funny, but I still choked. Then the moment came for the father of the bride to make his remarks to the new couple. This is what I said to them.

"Welcome to each and every one of you to My Big Fat Greco-Filipino Wedding...

Juliana and I, together with Ed and Mila, want to thank you all for joining us as we celebrate the marriage of our children Persephone and Eduardo. A special "thank you" to those who have traveled from the Philippines, France and Greece to be with us today.

The love affair of Eddie and Persephone started a bit over four years ago. On May 27, 2008, (Memorial Day weekend) I met Eddie for the first time, and I was immediately impressed by four things about him: His footwear (white moccasins), his hairstyle (a mohawk), his self-confidence that said, "I am totally comfortable in my own skin," and the way he looked at my Persephone.

An appropriately emotional but highly composed Eddie asked to meet with Juliana and me to ask for our blessing to marry Persephone. This was two years ago, on Memorial Day weekend, May 28, 2010 at 6:27 p.m... and 23 seconds.

Two years later, on Memorial Day weekend today, they exchanged their vows. Coincidence, Fate, Kismet? You be the judge.

Persephone, there isn't a person in this room that does not know how I feel about you and what you mean to me, so as the father of the bride, I am breaking with tradition. And rather than talking to all of you about my daughter, I will talk to you about Eddie instead.

Thank you, Eddie, for becoming the President and Chief Cheerleader of the "Persephone Fan Club" and screaming it from the rooftops. Thank you for your kind heart, generous soul, intuitive spirit, absolute selflessness, and your willingness to put Persephone's wellbeing ahead of almost anything else. Thank you for always being willing to do what is right, good, and nurturing to her soul. Thank you for always doing that without ever having to be asked. Thank you for the respect, support and encouragement you show her in everything and anything she wants to do. Thank you for being you.

Two years ago, when Eddie came to ask for our blessing to marry Persephone, I told him that the right man to marry Persephone had not been born yet and probably never will be, but that he was as close to that man as I had ever seen walking this planet.

I was wrong. That man had been born to Ed and Mila and was standing before me. That man is now my Persephone's husband and our son-in-law. That man, I am honored to call my friend.

Persephone and Eddie, as you begin a lifetime of togetherness my wish for you is to...

Never take the other for granted.

Fuel the romance to continue through your lives.

Always stand together facing the world.

Form a circle of love that gathers in the whole family.

Do not look for perfection in each other.

Have the capacity to forgive and forget.

Remember to always have a sense of humor.

You have married the right partner. Now continue your life together being the right partner. And when you choose that the time is right, my wish for you is that you be blessed with children who are exactly like you. I love you both."

100+ of the Most Incredible Wedding Photos

150+ Ways to Make Your Wedding Unforgettable