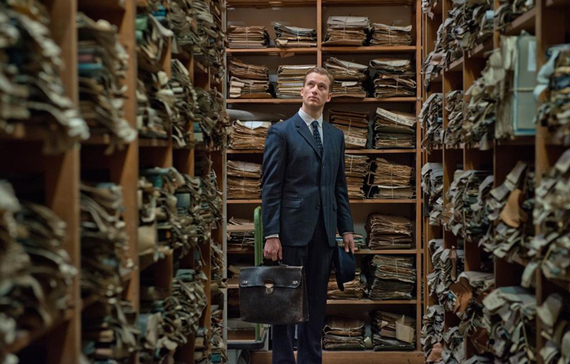 Depending on which source you believe, there are between one and two dozen -- yes, you read that right, dozen -- films opening this Friday in New York. Here is a brief look at a half-dozen of them:

Labyrinth of Lies: This German film tells an uncomfortable story about Cold War-era Germany in the 1950s, when Johann (Alexander Fehling), a young prosecutor, hears a story about a former Auschwitz guard, who is now a schoolteacher. When he decides to try to prosecute the man, he runs into stiff resistance. He's never learned about Auschwitz and is outraged that his countrymen -- who perpetrated these crimes -- have gone unpunished and faded back into daily life as teachers, bakers, bankers and the like.

This film, by Giulio Ricciarelli, dramatizes a moment of necessary cleansing: an owning-up by Germans to their recent shame and acknowledgment of societal complicity. But Johann runs into walls when he tries to hunt down the war criminals among everyday society. While government and military officials were punished after the Nuremberg trials, many of the soldiers who staffed the death camps simply melted back into society in the post-war chaos.

Labyrinth of Lies is worthy of Costa-Gavras: a headlong legal thriller in pursuit of a truth that is being fervently covered up. It's a serious film that is never solemn, bristling with energy while reminding us that there is no statute of limitations on one's conscience.

Mississippi Grind: I admire the talent and the daring that Ryan Reynolds brings to an array of independent films. He does exceptional work in this two-hander about gamblers on the road and up the river, even as they go down the river.

In this alternately comic and tense film by Anna Boden and Ryan Fleck, Reynolds is teamed with the always-surprising Ben Mendelsohn. Mendelsohn is Gerry, a gambling addict in Dubuque, Iowa -- as desperate a situation as you could imagine. One night at the tables, he meets a sympathetic spirit: Curtis (Reynolds), who has come to this town for the action (speaking of desperation).

Gerry decides that Curtis is his lucky charm and the two of them decide to tour the casinos and card games between Iowa and Louisiana, in order to raise the $25,000 buy-in for a high-stakes game they're sure they can beat in New Orleans. Those plans take several detours because, while Gerry may be a terrific poker player, he rarely catches a break and, in fact, has run from Iowa owing someone a lot of money. Mendelsohn gives Gerry more soul than simply a degenerate gambler. He's someone who honestly believes that his luck is bound to change for the better. Reynolds imbues Curtis with an empathy that grounds his easy-quipping persona. His buoyancy lifts Mendelsohn by the end of the film.

National Lampoon: Drunk Stoned Brilliant Dead: When asked where I get my sense of humor, I cite among the influences both Mad magazine and National Lampoon. Doug Tirola's documentary about the Lampoon is hilarious enough to evoke the classic Lampoon era -- and smart enough to put this publication in historical context as the nexus for what spun into a vast comedic empire that extended to "Saturday Night Live," "Caddyshack" and John Hughes' entire film-making career.