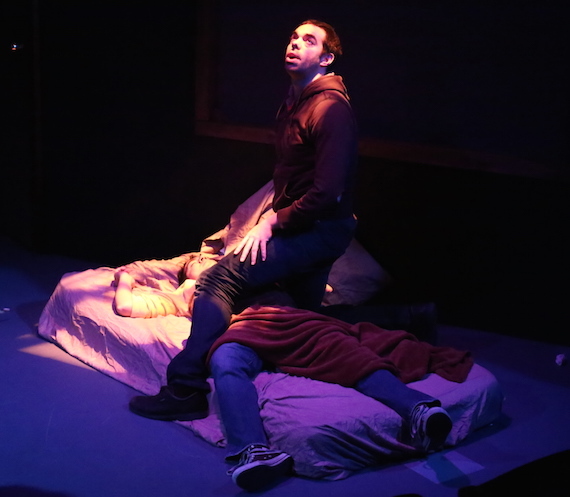 The Seeing Place is a creative, supportive, artistic home for actors who want to grow and hone their craft. Managed by Founding Directors Brandon Walker and Erin Cronican, both first class performer/directors, The Seeing Place also takes pride in making live theater affordable at $15 ticket prices. In the company's intimate performing space at The Clarion Theater, the viewers are close enough to the performers to feel like quasi-participants in the tough, contemporary dramas, presented two at a time in repertory. Their current offering -- Martin McDonagh's The Pillowman and Johnna Adams' Gidion's Knot-- are emotion-charged studies of dysfunction, domination, torture and death.

The Pillowman focuses on a nuclear family in a dystopian country where Mom and Dad reared two sons by physically and psychologically abusing Michal, the younger, to inspire Katurian, their firstborn, to literary greatness. Did this plan work? Not exactly.

Katurian (Brandon Walker) squirms in a police interrogation room, blindfolded and handcuffed, unsure of why he is there. He writes Kafkaesque tales about murders of or by children but despite only one of his stories having been published, two copycat infanticides have been linked to him by the police. His interrogation by good cop Tupolski (John D'Arcangelo) and bad cop Ariel (Logan Keeler) is punctuated by the offstage agonizing screams of Michal (Daniel Michael Perez), who, as a result of his horrific home-schooling, appears mentally slow but is apparently, a virtuoso at avoiding pain. He's savvy enough to scream whenever the police say, "Scream!" and confess to whatever they ask, i.e., that he and Katurian committed the murders Katurian wrote about. The actual truth is even more gruesome. Michal committed the infanticides alone, but knows about two adults whom Katurian smothered to death with a pillow. Matricide, patricide and fratricide ensue in Act 1 with pedophilia on call post-intermission.

The play's eerie but touching villainy is ably co-directed by Erin Cronican and Brandon Walker. Walker also plays Katurian in a performance grisly enough to send chills up anyone's spine. Also impressive were Logan Keeler as the frantic bad cop Ariel and in an almost non-existent role, Brisa Freitas, as the child who convinced herself and totally convinced me that she was Jesus! The greatest cheers belong to Daniel Michael Perez as Michal, who convinced me he was a bold PC casting move, striking a blow for diversity by awarding a "slow" actor with an actual speech impediment so many lines of dialog to memorize. Only after I heard the real Perez chatting after the show with friends was my allusion shattered.

Gidion's Knot, directed by Brandon Walker, is about a dead 11-year-old boy whose fantasies were as vicious and violent as the social media rants of Adam Lanza. Corryn Fell (Erin Cronican), the maniac-in-waiting's mother, is a liberal university literature professor of ancient epic poetry who considers its inherent violence as art and has encouraged her son to express himself. An intellectual snob who feels superior to Gidion's teacher Ms. Clark (Suzan Izatt) Mom cares more about browbeating and blaming Gidion's suicide on the five-day suspension set in motion by Ms. Clark's responsibility to her other students. Nonsense, but Ms. Clark is "good" enough to accept the guilt.

At a previously scheduled parent-teacher conference which La Professora insists on keeping despite her son's demise, Corryn bullies Ms. Clark into reading out loud the unnerving composition that so alarmed her. How bad was it? You decide. It described a war between students and faculty during which Gidion delivers the entrails of teachers, including Ms. Clark's, to weavers who fuse them into cloaks, and by awarding one to Gidion endowed him with the title and status of Poet which his mother believed he was. I could not understand how Ms. Clark could read that horrible composition without screaming at the mother about the mess she'd made of her son. For me, Gidion's suicide supplied the play with a happy ending by averting a future massacre.

Photo: Brandon Walker as Katurian over an inert Daniel Michael Perez as Michal by Natasha Straley