Throughout history, there have been more than a few unfortunate and ill-conceived branding and marketing ideas to have been thrust into public view. I'm not just talking about minor infractions like the recent Cocaine energy drink or that children's candy with the hard plastic "prizes" suitable for choking buried inside. I'm talking about serious failures. Probably the most famous example of an epic fail product was the diet pill known simply as "Ayds," circa 1982. The slogan: "Why take diet pills when you can enjoy Ayds?" I'm not making that up.

In the past several years, this caliber of epic fail has also appeared at various political protests. There's the infamous mullet-headed pro-war demonstrator holding a sign reading: "GET A BRAIN! MORANS." And just a couple of weeks ago, there was this display of fail by a protester from the far-right blog Free Republic: 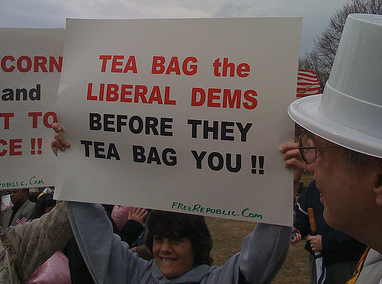 As the sign demonstrates, the funniest and most contradictory aspect of the recent far-right revolution is, hands down, the tea bag thing. But it's not just about the double entendre aspect of "tea bagging." A lot of it has to do with the idea that far-right conservatives are emulating the Boston Tea Party.

Let's recap. It began with the on-air rant from the floor of the Chicago Mercantile Exchange by the Coward Rick Santelli -- "coward" because he's apparently too afraid to go on The Daily Show and, instead, Jim Cramer went on and took a beating for something that Santelli basically started. Nevertheless, according to one of the official tea bag websites, Santelli is credited as the patron saint of the movement.

And unless I'm mistaken, the basic idea of the tea bag revolution is to protest against government bailouts and in favor of tax cuts for the wealthiest five percent of Americans. Ultimately, the tea baggers (can I call them that?) appear to be against allowing the Bush's tax cuts to expire. Strangely, they also appear to be against President Obama signing into law the largest middle class tax cut in history. They're also against helping middle and working class "losers" keep their homes. (By the way, your neighbor's mortgage is your problem. Just watch your property values plummet as soon as there's just one foreclosure on your block.)

This series of Obama policies, they say, portends tyranny in America. Of course none of the policies of the Bush administration were considered tyrannical by many of the current tea bag leaders. You know the list of Bush trespasses. The illegal searches and seizures, the illegal electronic eavesdropping and torturing. The suspension of habeas corpus, the record deficits, the doubling of the national debt and so on. None of that was tyrannical. But allowing the tax cuts for the wealthiest five percent to expire is absolutely the vanguard of totalitarianism.

So the organizers of the movement have picked up on Santelli's tea party reference and are rebelling against higher taxes for the rich and corporations by purchasing thousands of tea bags and dumping them into various waterways.

To sum up: higher '90s-era tax rates for the wealthy and corporations? Tyrannical. Tax cuts for the middle class? Also tyrannical. Therefore, emulate the Boston Tea Party as a means of underscoring these positions.

The Boston Tea Party was ultimately precipitated by a massive corporate tax cut.

In 1773, the only major multinational corporation at the time, the British East India Company, was teetering on the verge of bankruptcy. According to that obviously liberal organization, the Boston Tea Party Historical Society, one solution was to bail out the corporation by offering it a government loan. But instead, at the urging of the East India Company's powerful lobbyists and supported by King George III, Parliament passed the Tea Act which almost entirely eliminated the duty -- the tax -- on British tea exported by the East India Company to the American colonies. How do we know this? Well, the actual subtitle of the Tea Act, for one:

An act to allow a drawback of the duties of customs on the exportation of tea to any of his Majesty's colonies or plantations in America; to increase the deposit on bohea tea to be sold at the East India Company's sales; and to empower the commissioners of the treasury to grant licences to the East India Company to export tea duty-free.

The rationale was that lower taxes meant lower prices, which meant the East India Company would sell a lot more tea. Your basic free market precursor to Reaganomics and supply-side economics in action. In other words, the British government's solution to the East India Company's financial crisis was, in effect, a tax cut. A big one. Exactly the same economic solution that's been pushed by congressional Republicans and the tea bag revolutionaries 236 years later.

The tax cut was viewed by colonial patriots as another example of British tyranny against smaller merchants whose business would be severely undercut. Consequently, political activists and, most famously, the Sons of Liberty, organized a boycott against the East India Company's tea. And later that year, when the Dartmouth, Beaver and Eleanor were docked in Boston harbor, the Sons carried out their famous protest.

It turns out that that the tea baggers, led in part by Michelle Malkin, Glenn Reynolds and the Coward Rick Santelli, are politically more in line with the tax policies of King George than the views of the Sons of Liberty and the colonial patriots. The tax baggers emulating a protest against a corporate tax cut -- but, oddly, in support of tax cuts for the rich and corporations. Furthermore, King George was against a corporate bailout loan. And so are the tea baggers. And I don't think it'd be a stretch to suggest that many of the tea baggers are recipients of the president's middle class tax cut.

So in keeping with a long, embarrassing history of ill-conceived, contradictory or just plain self-defeating marketing ploys, the tea baggers seem to have adopted a concept that completely and utterly contradicts what they claim to stand for. Don't misunderstand me, though, they absolutely have a right to protest or do whatever the hell they want. They also have a right to be ridiculously and hilariously inconsistent. In a strange way, consider this column as helpful advice to the tea baggers. Perhaps it's time to quietly abandon the whole tea bag thing.

Unfortunately, I doubt they'll listen. Last week, with crocodile tears streaming down his punch-me face, Glenn Beck urged his viewers to: "Believe in something -- even if it's wrong. Believe in it!" Looks like they're way ahead of you, Glenn, you crazy bastard you.